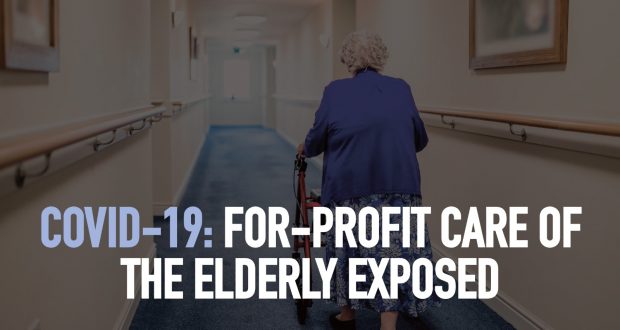 Going into the COVID-19 crisis the priority for the government was to “flatten the curve” in the community to preserve critical care beds and avoid a surge which would put tremendous pressure on an underfunded, under-staffed and under-resourced health service. The elderly and immunocompromised were almost dehumanised, and basically seen as already doomed – an approach that inevitably led to many unnecessary deaths.

As COVID-19 spread across Western Europe the Irish government and the HSE had prior warning of what could happen in our nursing homes and long-term care facilities if decisive action wasn’t taken and procedures to protect workers and residents put in place immediately. They failed to act until it was too late. The shortage of PPE in residential care settings was ignored. It took until 18 April, when HIQA teams entered the homes, for widespread testing of workers and residents in nursing homes to be rolled out. Much of this testing was once-off, and follow-up testing or re-testing is entirely left up to workers themselves – having to contact their own GP and go through the long waiting process.

A census of mortality in long-term residential care facilities carried out by NPHET (National Public Health Emergency Team) found that 636 more deaths occurred in these facilities between 23 March and 19 April this year compared to the same period in 2019, with 92% of additional deaths virus related. It found the total number of deaths in nursing homes and residential care facilities during that period to be 1,232 – more than double that of those that occurred in the same period last year.

Failures in Europe and UK

Assessing the true COVID-19 death toll in nursing homes across Europe is difficult due to deficiency in the data. France initially didn’t count nursing home deaths in its official virus tally, and since it began including them in early April, daily fatalities more than doubled.

In the Spanish State an unpublished government report cited by RTVE (public broadcaster) on 23 April, estimated that nursing home residents accounted for two thirds of overall COVID-19 deaths at almost 14,000 deaths. In Milan, the epicentre of the virus in Italy, police raided a facility with 1,000 residents in an investigation into more than 200 virus-related deaths. Managers at the home (Italy’s largest) are suspected of hiding virus-positive patients. One technician who is now in quarantine spoke out saying; “I saw tears and fear in my colleagues eyes”. Management warned workers against wearing PPE and masks “because we might scare patients, creating a false sense of emergency”.

The UK is also struggling to determine how many virus-related deaths have occurred in long-term care facilities. The National Care Forum estimated deaths had doubled in just one week in April. Given the recent history of scandal and negligence in care homes in the North, the issue of testing workers and residents calls for urgency from the Stormont Executive, which has so far been slow to act. All of the above shows a contempt for the lives of the elderly.

In the south of Ireland in 2002 the Fianna Fáil government brought in the Finance Act which gave incentives and tax breaks to developers building private hospitals and nursing homes. Even now Bartra Capital has plans to buy or build 2,000 beds in nursing homes. Most residential care facilities are privately owned in both the North and South. As mentioned, allegations of neglect have rocked the sector in both jurisdictions.

In the South most care is funded through the HSE-run “Nursing Homes Support Scheme”, also known as “Fair Deal”, as the vast majority of ordinary people can’t afford private nursing homes and public nursing homes only make up 15% of the total. A financial assessment is carried out to assess qualification for the scheme. The resident pays:

·       7.5% of the value of any assets per annum (such as the family home). This contribution may be deferred and paid after the death of the person (Nursing Home Loan).

Services covered include care, bed and board, basic laundry service, and basic mobility aids. Anything extra, such as activities, blister packing of medicines, haircuts, chiropody etc., must be paid for by the resident. In 2019, direct state subsidies to “Fair Deal” across all providers was €980m.

The insufficiencies in our care for the elderly have never been more glaringly obvious than at this time. As in other privatised sectors, making profit rather than provided quality care is the priority. This inevitably means greater pressure to cut costs, pass on charges to residents and their families, and employ workers on low pay (most are on minimum wage or just above) – forcing them to work long hours and under immense pressure.

Workers in nursing homes are predominantly women, migrants, and students who have to spend the most part of their work shift in direct contact with residents. Social distancing is not possible. If correct PPE isn’t provided and good staffing levels aren’t maintained the risk of infection to workers and the spread of infection among residents is inevitable. As is often the case in precarious sectors such as this, nursing home employment has become agency-led, with many workers moving between care homes further facilitating the spread of COVID-19.

Acting Minister for Health, Simon Harris, announced a €78 million package to bail out private nursing homes. This package included provision of PPE and extra staff, but is too little and for many too late. However it is also an effective admission that the for-profit model of care for the elderly doesn’t work, especially in times of crisis.

The two-tier health system needs to be abolished for all hospitals and healthcare facilities. Residential care facilities must be brought into public ownership, as part of a properly funded healthcare system that’s run under the democratic control of healthcare workers, patient associations and representatives of the wider working class. The trade union movement needs to put pressure on the state to protect all workers across the health service, to ensure workers have access to proper PPE and are tested on an ongoing basis so that their safety and the safety of the people they care for are prioritised.