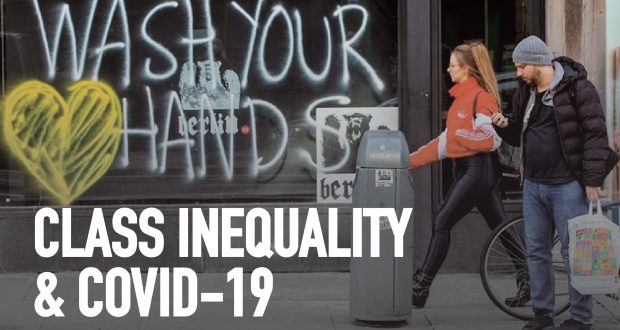 While responses to the COVID-19 pandemic have varied from country to country, one common thread to all is the near uniform refrain from governments, the mainstream media and the super-rich: ‘we are all in this together’.

Yet as the figures for infections and deaths continue to climb, the evidence mounts as to the disproportionate and devastating impact the virus is having on those that were already suffering the worst effects of a deeply unequal and racist system.

While the virus can infect anyone, how it spreads is far from indiscriminate. Recent figures published by the UK’s Office for National Statistics (ONS) showed that people in the poorest parts of England and Wales were dying at over double the rate of those in the wealthiest. The most deprived areas had a death rate of 55.1 per 100,000 people compared to 25.3 per 100,000 in the most affluent.

In the US the trend is very much the same: 33% of those hospitalised with the virus are African American, despite amounting to only 13% of the population. In Chicago, black people make-up 29% of the city’s inhabitants, but shockingly account for 70% of the city’s COVID-19 deaths.

Conditions of the working class

How can we explain such stark disparities? For one, the dire housing crisis that has been a feature of many cities over the last number of years has seen overcrowding become the norm in many working-class communities.

A recent Irish Times article on the effects of the pandemic in the hard-pressed Moyross community in Limerick, spoke of one family of ten – parents, children and grandchildren – all living in a small three-bedroom house. Such conditions make social-distancing impossible, and can give way to a more rampant spread of the virus.

Another massive factor is working conditions. While many have shifted to working at home, these are ultimately a minority and tend to be higher earners, particularly those in sectors like finance and insurance. In contrast those lower-paid workers who have not lost their jobs are more likely to be public facing or work in confined conditions. In the US and Brazil, for example, meatpacking plants have been a particular hotbed of COVID-19 clusters where thousands of workers stand in close proximity, carrying out gruelling labour. In the North, a similar trend is emerging with outbreaks in Linden foods and Moypark, the latter of which saw the death of one of its workers from the virus.

Yet for many, even those considered at-risk, there is an economic compulsion to remain in jobs that pose a direct risk to their health. The incurred loss of income through giving up work coupled with lack of adequate social services would push many people and their families, already struggling, into an outright crisis.

To fully grasp the higher death rates we need to examine capitalism’s grim health inequalities. Martin Luther King Jr. once noted that “Of all the forms of inequality, injustice in health is the most shocking and inhuman.” Even in supposed ‘normal’ times impoverished and deprived communities experience a greater and wider degree of health issues and have a higher mortality rate than average.

The common underlying conditions that make COVID-19 more severe – diabetes, asthma, cardio-vascular disease, high blood pressure – are inordinately higher amongst poorer sections of society. Research in the US found that people with lower incomes tend to develop chronic illnesses between five and 15 years earlier in life.

While there are not similar figures available as to the relationship between COVID-19 and class in Ireland, it is more than likely to follow the same pattern, for the very same health inequalities exist. One report in 2014 found that the death rate from chronic disease had “a clear social class gradient, with the rate in the lowest occupational class demonstrated to be 100–200% higher than in the highest occupational class.” Similarly, research undertaken by the Central Statistics Office last year found that those who lived in affluent areas lived on average five years longer than those from the most deprived.

The roots of health inequality

We should firmly reject the condescending and moralistic narrative that puts bad health down simply to poor individual choices around diet and exercise. These issues have more systemic roots.

Decades of neoliberal privatisation of healthcare has had a grievous impact on the lives and well-being of working-class people. Access to quality healthcare has come to be largely dependent on one’s ability to pay, leaving many across the world with no healthcare at all or faced with increasingly under resourced public healthcare systems. In Ireland, even prior to the pandemic, overcrowded  public hospitals and lengthy waiting lists have led to unnecessary worsening of people’s conditions and otherwise preventable deaths.

In communities where decent education and employment are systematically closed off to its residents, alcohol and substance abuse are never far from sight – a form of self-medication for the anxiety and depression that comes with social marginalisation. Many such deprived areas are lacking in sport and leisure facilities and community programmes that promote social and physical well-being.

Finally, the type of work one does also has a profound impact on one’s health. The aforementioned CSO study also found higher mortality rates amongst “semi-skilled” and “unskilled” workers. Physically exhausting labour, unsafe conditions, long and irregular shifts that limit one’s ability to prepare healthy food and plan exercise, as well as the stress and anxiety that comes with precarious and badly-paid employment have an array of negative effects on one’s health.

The list could go on as to the number of ways the system makes us sicker. Not only are the poorer sections of society more likely to contract the virus, but the underlying health inequalities that capitalism has fostered over the last number of decades means they also face the biggest complications and risk of death.

Nevertheless, these bitter and tragic experiences will leave an indelible imprint on the consciousness of working people and the oppressed. The pandemic has exposed and exacerbated the horrendous inequalities woven into the fabric of capitalism.

The words of James Connolly, uttered over 100 years ago, that “the day has passed for the patching up of the capitalist system is passed; it must go” is taking on a renewed relevance for a while generation and poses directly the need to build a united movement of the working class capable of breaking with a system that so clearly places profit over human lives.