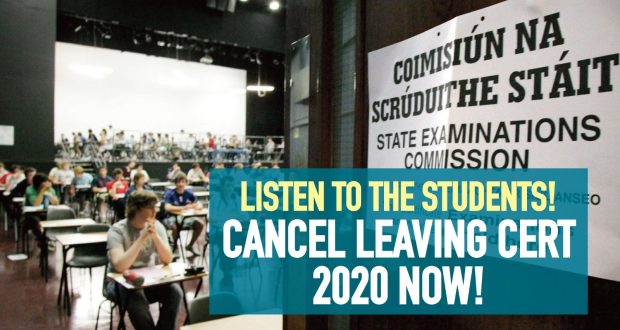 Leo Varadkar, Joe McHugh and the Department of Education display cold disregard for the opinions of 61,000 young people. Unmoved, they remain intent on bullying young people into sitting the Leaving Cert. This Dickensian meanness — even after Fianna Fáil, their soon to be partners in Government, finally bowed to the popular opposition to Leaving Cert exams 2020 — needs to be ended.

Whether the Leaving Cert exams go ahead is not dependent on how the public health position develops in the next few weeks. Neither can words from the Government resolve the situation by bringing clarification and certainty. That’s impossible as instability and sudden changes are inherent in the crisis flowing from the Coronavirus.

There are no circumstances in which this year’s Leaving Cert exams can proceed. Enough damage has already been done to the 61,000 school students. To pile on any more pressure will undoubtedly cause untold mental anguish. It is incredibly backward that Leo Varadkar and Joe McHugh refuse to listen to the voices and even the cries of young people. It is proof positive that from their privileged position they don’t really care for the mental health of young people, particularly working-class youth, who will be particularly disadvantaged if the Leaving Cert goes ahead in the next months.

The momentum for cancellation is building. Instead of adding further to the anguish of the 61,000 students, if Fine Gael showed even a fraction of the concern for young people that they are showing for business interests, the exams would be cancelled immediately. The failure of the biggest party in the state, Sinn Féin, to call for cancellation is very disappointing. They should come out now for cancellation, so this extreme stress on young people can be lifted.

The Leaving Cert will either be ended by political decision now or by action from young people themselves which will force the political establishment to drop it in the weeks ahead. Cancel the Leaving exams with all students who were due to sit them issued a certification; extra immediate investment in third level so that all this years’ students get one of their top choices in courses; expand apprenticeships and training places; there must be no competition or examination that pitches this years’ students, who have already suffered enough, against each other for a decent future that they all deserve.