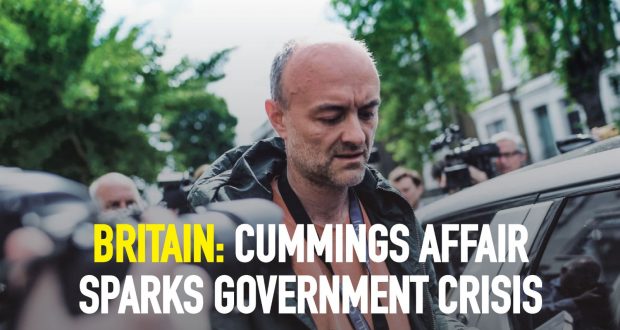 By Tom Costello, Socialist Alternative (our sister organisation in England, Wales and Scotland)

Working class people have had to make endless sacrifices under lockdown. Parents have been denied entry to hospitals where their children are receiving treatment. Elderly relatives in care homes have gone unvisited for months on end. And for the vast majority of us, we don’t have the luxury of being able to drive our families out to second homes.

This cannot be said for the likes of Dominic Cummings, whose careless actions have plunged the government into crisis and fanned the flames of growing opposition to the Tory government’s response to Covid-19. A chorus of people, including senior health figures such as Dr Rinesh Parmar of the Doctor’s Association UK, have called on Cummings to resign.

This will not be helped by the comments from yesterday’s live press conference and statement – a rotten car crash of excuses that will do him and the Tories no good at all. It has now been confirmed that, rather than going into self-isolation after suspecting he and his wife had the virus, they instead chose to leave London with their 4-year old son to spend time at Cummings’ parents’ home on a wooded estate outside Durham, blatantly against the guidelines provided by his own government. This was when his wife was already showcasing clear symptoms.

After this government has spent months whipping up hysteria about ordinary people using parks for their daily exercise, Johnson has now done a 180-degree turn, saying that Cummings’ actions were ‘responsible’ and ‘legal’. Clearly it is one rule for us, and another for the super-rich and political elite!

While working people face attacks for using public transport, the likes of Cummings can lie their way through scrutiny. Indeed, the first thing noticed about his story was how contradictory it was. Who in their right mind would, after complaining of reduced eyesight, make an hour-and-a-half drive to and from Barnard Castle, in order to ‘put it to the test’? Driving with suspected eyesight problems no doubt poses a physical threat to the driver and passengers, so why would he take his son with him? If the woods that Cummings was spotted in were part of his parents’ estate, why not drive the remaining short distance back to the house for the toilet break he mentioned? Needless to say, his account of events was full of holes.

This scandal has dramatically undermined much of the remaining public faith in the Tories to protect our health. It proves once again that the Tories cannot be trusted to act in our interests – whether of our health or living standards.

We simply cannot let them get away with this. While Tory figures flout the rules, thousands of workers are being forced back to work without adequate safety measures – all in the aid of private profit. On 1 June, teachers and pupils face being forced back into unsafe classroom conditions. It will be key to support National Education Union members in their fight against unsafe school reopenings – as well as all workers taking a stand to defend health and safety.

This incident emphasises the need for working class people to fight for full democratic control over the measures needed to fight the virus and protect living standards. Most immediately, this means fighting for workers and trade unions to set the terms of returning to work and reopening schools. The trade unions nationally cannot afford to be quiet on this anymore. Workplace committees must be formed by all key workers to make these decisions. There can be no trust in the Tories – let’s send that message to them!