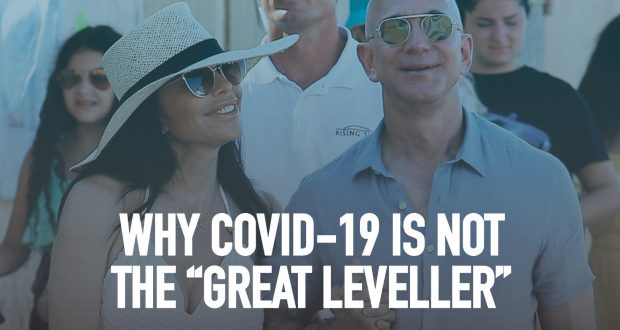 The horrific Covid-19 crisis has graphically exposed the multiple inequalities and forms of oppression that lie at the heart of capitalism. Working-class people find themselves out of work and down on income. For those workers deemed essential, the same unacceptable workloads continue, with a lack of sufficient PPE provision or any increase in their wages from bosses who only care about profit.

For the super-rich, this pandemic provides opportunities to make money off the backs of the mass of working class people. A recent report from the US has shown that 34 of the wealthiest billionaires increased their wealth even further during this crisis. This list includes the likes of Amazon’s Jeff Bezos, already the richest man on Earth, and now $25 billion richer in one month!

These massive profits – on which he avoids taxes – are made by combining modern supply chains with poverty wages and working conditions reminiscent of the 19th Century. At the same time, workers in Amazon warehouses in the US have organised walkouts to say “Enough” and to demand proper cleaning of facilities and PPE.

At the same time as their unearned wealth soars higher and higher, the super-rich are retreating from society to their massive ranches, as Jeff Bezos has done, or to their bunkers or mansions. This is a luxury that working-class people scarcely afford, still having to work, take care of family members or go to the shops, lacking the army of servants the capitalists have. All humans are vulnerable to this pandemic, but contrary to the propaganda of the defenders of the capitalist system, Covid-19 is not “the great leveller.”

Shamefully, one billion people live in the slums of the neo-colonial world. The lack of affordable homes in advanced capitalist countries means overcrowded housing has become increasingly the norm, thus cutting across the ability of working class people to socially distance. There is nothing new about this. A century ago James Connolly, when writing about the scourge of tuberculosis in Belfast, described how:

“The medical authorities issue long and minute instructions to the people as to how consumption may be avoided, but the instructions are as a rule utterly valueless to the class most subject to the scourge. Of what use is it to teach people about the evil of overcrowding when their wages will not permit them to secure decent house room? Of what avail a paper telling how to cook and prepare food when they have only 45 minutes to come from the mill, cook a meal, eat it, and return to the mill – the mother being one of the bread-winners or wage-earners of the family? Of what avail instilling into the worker the necessity of choosing proper food to counteract the tendency to consumption, and so increase the resisting power of the individual, when the wages are so small that only the poorest, easiest cooked, and generally least nutritious foods can be bought?”

Tuberculosis might not be a reality in advanced capitalist countries anymore. However, the conditions Connolly is describing remain throughout the globe. These conditions set the scene for the Covid-19 pandemic to wreak havoc on the working class and poor, and will do so for further pandemics.

Living standards under the crisis

Working class people will increasingly see that in this crisis, it is only their own organisation and self-activity which gives them a chance of defending themselves against the triple alliance of the virus, the callous indifference of their employers, and the economic crisis. Ultimately this stems from the collision of production for profit, which capitalism is built on, and the existence of a global pandemic.

Workers are beginning to fight back against their exploitative bosses. Debenhams workers in the South have responded strongly to an employer who has hung them out to dry while they continue to make profits. This will only exacerbate already unacceptable wealth inequality, and if it is not met with the challenge of workers, it will be followed up in other workplaces. In the North workers in food production plants engaged in walkouts to force their employers to take their safety seriously, while, as has been mentioned above, Amazon warehouse workers have staged actions to force the richest man in the world to care one iota about their lives.

The capitalist class fear a fightback of the essential workers they have praised to high heaven – so long as they don’t have to materially reward them – as much as they do the virus. Their obscene wealth is based on the work done by the working class to keep society running. There is no reason that this wealth should lie in the hands of private individuals who did nothing to earn it.

The fightback of workers needs to become generalised in this context, the trade union movement should mobilise and activate its membership to this end. This needs to be linked to the building of new parties of the working class based on a programme committed to end the rule of the billionaires and super-rich, and fighting for socialist change.

The working class needs to struggle to take ownership and control of the wealth they produce, and to this end, need to organise themselves industrially and politically to take on the capitalist class in the fight to construct a society based on need not profit. This would mean a democratic socialist society, which would mean the working class democratically running society from their workplace up, with the production and distribution of all sectors of the economy planned out by working class people according to what is socially necessary. Democratic workers’ control and planning would be linked to the key sections of the economy – the major banks, services, sources of production and distribution – being brought into public ownership.

In such a socialist society, the pursuit of private profit, which is the root cause of discrimination, inequality, oppression and climate change, would be brought to end. This is a struggle the Socialist Party, and its sister organisations in International Socialist Alternative (ISA), are committed to, and we would appeal to those who are like-minded to get in touch to learn more.