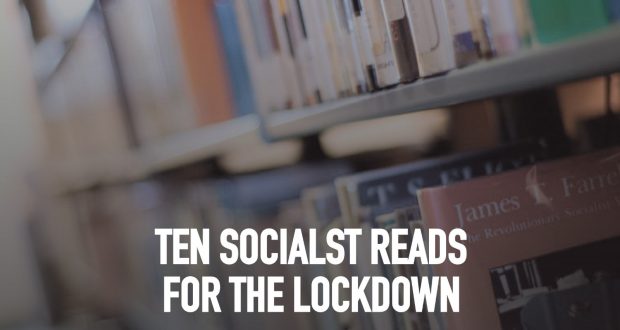 If you’re anything like me, you’re stuck in the house with a lot of spare time on your hands. (Solidarity to those key workers and parents who are rushed off their feet!) Which, so far, has translated into a whole lot of screen time – be it through zoom calls, youtube, or netflix binging. This is fun, but it’s getting a bit old. If you are even more like me, you’ve also been watching events unfold around us and thinking – this just is not fair, there must be an alternative to the chaos and mismanagement that we’ve been seeing. If so, find yourself some time, and have a read of some of these classics. Learn about the potential alternative that exists and how we can achieve it, so that when the lockdown is lifted we can be prepared and ready to move forward, to fight for a better world for working-class people.

Imagine this, some socialists suggesting that you should read the Communist Manifesto! In all seriousness, despite its fame, The Communist Manifesto is still somewhat underrated within the reputation it enjoys. Many understand it to be a simple polemic, or call to action – and whilst it certainly fulfils that criteria, it’s also so much more. The Communist Manifesto provides a succinct introduction to what Marx and Marxists stand for. It explains; the scientific method behind the Marxist theory of change and historical development; the limitations of seeking to achieve liberation within the structures of the capitalist system; and the inner contradictions of capitalism that lead it into a continuous boom-bust cycle; as well as illustrating why and how it is the working-class who are the main drivers of social and economic change.

Peter Hadden wrote this book for people who want to challenge orange and green politics, and to struggle for socialism. People in Northern Ireland are brought up being taught about the history of ‘us vs them’, but little is said of the rich history of working-class people being brought together in common struggle. Marx once said, “If you can cut the people off from their history, they can be easily persuaded.” CHCS explains that sectarian conflict is not and was not inevitable. Internationally, the sixties were a decade of revolution and struggle for social and economic change. In the North, conditions existed for a united movement of Protestant and Catholic working class people to challenge sectarianism and capitalism. A socialist future free from division and poverty was within reach. This book explains concretely how a united working class acting in their common interests in the fight for a socialist society could have, and still can, solve the national question in Ireland.

This year marks the tenth anniversary of Peter’s passing away. So, the Socialist Party will be reprinting some of his other key works, starting with ‘Divide and Rule’ which will be available very soon – keep an eye out for updates!

This is probably Luxemburg’s most recognisable title, and it is becoming increasingly relevant this year. With Starmer taking over as labour leader and Sanders stepping aside and endorsing Biden… Where do we go from here? Luxemburg looks at the role of the trade unions, of workers co-operatives and the nature of capitalist ‘democracy’. She also notes the importance of socialists fighting to better the lives of working class people in any way we can, including through fighting for reforms within the capitalist system. However, she explains that this is not our end goal, but a step along the path. Such reforms, Luxemburg explains, represent the regulation of exploitation, but it should be our goal to overcome exploitation entirely through breaking with capitalism and building a socialist society – through a revolution of working class people, to take the economy, the factories and workplaces into democratic control of working class people, so that the resources that exist can be planned to meet the needs of working-class people and our planet, not the bank accounts of the super rich.

This book is a must read for anyone who wishes to join the fight for a better world. State and Revolution describes the role of the State in society, the necessity of proletarian revolution, and why we cannot reform capitalism out of existence, or see the State as a neutral institution. Lenin’s direct and simple definition of the State is that “the State is a special organisation of force: it is an organisation of violence for the suppression of some class.”  and so he underlines the major limitations within bourgeois democracy in which we merely “decide once every few years which member of the ruling class is to repress and crush the people through parliament”. Lenin also responds to questions many have about the existence of the State after the proletarian revolution, whilst addressing theoretical criticisms from anarchists, reformists and liberals.

Origin of the Family, Private Property and the State – Friedrich Engles

Engles wrote in 1884, “The modern individual family is founded upon the open or concealed domestic slavery of the wife.” Today, the unpaid work done by women in the home (cooking, cleaning, childcare, care of the elderly etc) is estimated to be worth $10.8 TRILLION a year – this is three times the size of the tech industry. Capitalism is reliant upon the dual exploitation of women, as underpaid workers and unpaid domestic carers. In this book, Engles explains how and why this scenario has come about – what role the nuclear family fulfils in capitalist society and the connection between women’s oppression and the development of class society.

I’m going to be honest, I had goosebumps a good 80% of the time when reading this. It is an account of the strikes and union organising drive that the men and women of Teamsters Local 574 carried out in Minnesota in 1934, with the aim to win better living and working conditions. They achieved this and more, paving the way for a continent-wide rise of the CIO as a fighting social movement. For the duration of the strike, the workers ran the city – no trucks moved without their say, canteens, laundrettes, and hospitals were set up by and run by the workers. They made Minneapolis a union town, defeating not only the trucking bosses but also the strikebreaking efforts of the federal governments. Teamster Rebellion provides a clear and inspiring example of how the determination, sense of self-sacrifice and power of the working class when united and put into action is absolutely unstoppable.

There are very few events which are as deliberately distorted as the Russian Revolution in 1917. Many try to suggest that what happened during these days was an undemocratic, authoritarian, violent coup – but this book, written by Reed (a US journalist in Petrograd at the time) captures what really happened. Containing reports of speeches both by leaders and the comments of bystanders and workers involved, Reed describes what actually unfolded when the proletariat, soldiers, sailors, and peasants united to rid themselves of an oppressive regime.

Whilst providing a historical account of the events of the Spanish Civil War, Morrow outlines numerous lessons that socialists today can learn from – including a succinct definition of what fascism is and what it represents. It describes the heroic struggles waged by the workers and peasants which, in Trotsky’s words, could have carried through ten revolutions. Morrow describes in detail the failures of the anarchists and the rotten role of the Stalinists in undermining the will and potential of the working class to defeat fascism through the struggle for a socialist society, and theorizes on the alternative paths that should have been taken. A study of these tragic events can equip us with the knowledge on how to avoid them in the future.

Love on the Dole – Walter Greenwood

Maybe you want to take a break from the non-fiction for a while – so I’ve got you covered with these next two books.

Love on the Dole is based loosely on Greenwood’s upbringing in a slum in Salford in the 1930s. It is centred on working-class life in the estate during the period of soaring unemployment and the introduction of the draconian Means Test. In following the Hardcastle family through their days, the novel deals with issues of poverty – exploitation at the hands of the bosses, bookies and pawnbrokers, and generally illustrates how working-class people lived their lives in the face of it all. From how they spent their spare time, to romances and holidays. It also provides an account of how working class people had each other’s backs against the dire conditions they faced.

For those with extra time on their hands, it’s also very interesting to look at how and why aspects of this book were censored before being adapted into a film.

“Buried like moles beneath the crushing weight of the earth, and without a breath of fresh air in their burning lungs, they simply went on tapping.”

This story is based on a coal mining community in Northern France in the 1860s. The book title refers to the way the coal miners were the ‘seeds’ – or agents – for change. Zola tried to get across how coal miners challenged their terrible working and living conditions by coming together and going on strike. You can see the gradual steps of the workers coming to realise how unfairly they are being treated and how they must do something about it. Zola did a lot of research before writing this book, including taking trips underground and talking at length with miners, meaning the language and descriptions used really brings the story to life – you feel like you’re standing shoulder to shoulder with them, physically and metaphorically.

There are countless other books and pamphlets that we could recommend to those interested in finding out about socialist ideas. Maybe you have some recommendations of your own, if so let us know! As Marx said ‘philosophers have only interpreted the world, the point is to change it.” So yes, spend this time in lockdown reading and learning, but also get active and discuss with socialists about how we can put these ideas into action.