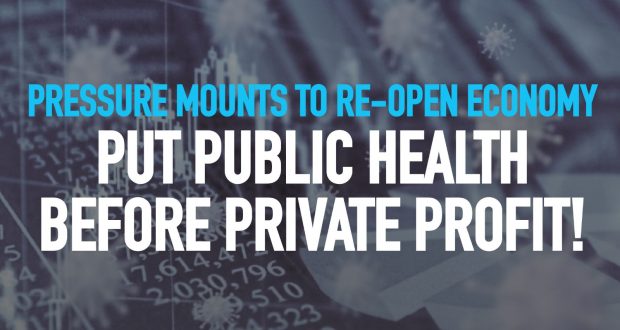 The Covid 19 crisis has shown clearly that we live in a system which puts profit ahead of peoples’ lives and health. Workers have been forced to work without proper PPE and social distancing. Many non-essential businesses have continued to operate on spurious grounds, like the Ferraro factory in Cork producing TicTacs! Others, such as the Construction Industry Federation, unsuccessfully lobbied for sites to stay open.

Now pressure is building in many countries across the world for an ‘’exit strategy’’ from the shutdown. This pressure is not coming from working-class people. Everyone, of course, would like to see the end of the shutdown which has had a big impact on the incomes of many, but also causes real issues for people’s mental health. Despite this, the majority of people have accepted the shutdown of the economy and have complied voluntarily with medical advice because we understand the need to protect public health.

The pressure for rushed ‘’exit strategies’’ comes from big business. In the US, former Wells Fargo CEO, Dick Kovacevich, now an executive at Cisco and Cargill, summed up the callous attitude of many at the top of society: “We’ll gradually bring those people back and see what happens. Some of them will get sick, some may even die, I don’t know … Do you want to take an economic risk or a health risk? You get to choose.”

Even in Italy, the employers’ organisation Confindustria has fought to keep non-essential industry open throughout the crisis and has started putting pressure on the government to lift restrictions. The local branches of the lobby in the four Northern regions which were the centre of the Covid 19 maelstrom say: “The country risks turning off its motor forever and every day that passes represents a greater risk that we won’t be able to start it up again,”. As of 13 April, 100,000 Italian employers had applied for the “right” to re-open their businesses.

In the Spanish state, another place which is at the centre of the outbreak, the government has already conceded to the pressure and re-opened manufacturing, construction and other sectors. In Ireland, this pressure is now mounting as well.

In Britain, at this point the government — given their slowness to act at the start of this crisis, following the callous ‘herd immunity’ strategy — have been very careful to prematurely talk of an exit strategy. However, some government backbenchers are beginning to articulate the need to end the lockdown. With one claiming “Money does not grow on trees!” and revealingly “why should we lockdown any longer than Italy or Spain? Or France?” Shamefully the new Labour leader, Sir Keir Starmer’s form of opposition has been to show very little opposition and call on Tory ministers to set out an “exit strategy”.

The Irish Times reported (10 April) on the deliberations of the caretaker government in the South: “the conversation within Government is increasingly taking account of the ongoing costs of the lockdown. The Government cannot continue to finance all of society on an indefinite basis; if the economy falls into a lengthy depression people will die from that too, officials say… Sources believe that construction and non-essential manufacturing, both closed in the final round of restrictions, are likely to be the first to be allowed to reopen.”

Capitalism is a system based on the ruthless pursuit of profit but also ruthless competition on a national and international level. It is in the interests of big business and capitalist governments to be the ‘’first’’ to end the shutdown. They pose it as being about the economy — and we take very seriously the hit that people are taking to their jobs and incomes and the devastation this can cause for many workers. But to set this consideration against public health is a false choice. There exists in society the wealth to sustain living standards during a temporary shutdown of normal economic life. The richest 17 billionaires alone have a combined wealth of €40 billion. However, this wealth is in the control of a small elite. We should say clearly that public health must not be sacrificed to turn the tap of profits back on and the wealth must be used to ensure working-class people don’t pay the price.

Of course a shutdown of the economy and normal life cannot continue indefinitely. There does need to be a real plan to end the shutdown. But it must be one which proceeds with caution on the basis of the scientific evidence and with public health and wellbeing as the overriding consideration. A critical part of that is a serious approach to mass testing, with rapid return of results. For much of this crisis, the governments’ approach to testing, both North and South, has been a mess with only a limited number qualifying for tests and long waits for results. This needs to be revolutionised with huge resources before a return to work can begin.

A plan to re-open non-essential manufacturing and construction first would be one which puts corporate profit first. Instead a plan in the interests of the majority in society would re-open sectors of the economy on the basis of public need. As time goes on, more and more goods and services which have been foregone during the crisis will become ‘essential’. For example, many non-emergency health procedures have been cancelled, which was the right decision, but can’t continue forever. The retooling of manufacturing wherever possible to produce PPE, ventilators and other essentials for fighting the pandemic should also be a priority. The decision to prioritise the re-opening of certain sectors should be on the basis of ensuring that peoples’ needs can be met.

Workers Should Have the Power to Decide

An important question is: who makes these essential decisions? They can’t be left up to big business which will always put profit first, or to capitalist governments like a potential Fianna Fáil-Fine Gael coalition government, or the Tory government in Westminster or the Stormont Executive all of which will decide in the interests of those same big business interests.

The Socialist Party has raised during this crisis that workers themselves should determine what is ‘’essential work’’. We should have the same approach to this question; workers should not be forced back to work but should be able to decide democratically what is essential in their own workplaces and across society as a whole. There should also be workers and trade union committees in all workplaces with the power to enforce safety standards during this pandemic.

The fact that big business is willing to wholesale risk the health and even lives of workers to return to profitability is an indictment of the inhumane capitalist system we live under. At the same time, the huge solidarity shown by working-class people — including frontline workers — during this crisis points to the possibility of a different way of organising society. Public ownership and democratic workers’ control of the key sectors of the economy is needed to ensure a society geared to the needs of the majority, not the profits of a few.