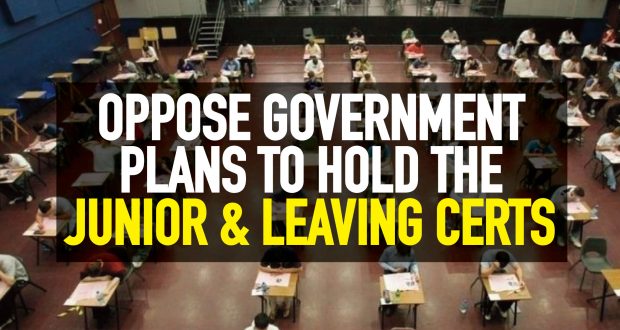 The high handed approach of the Department of Education and Science in their proposals for the state exams this year has provoked an angry reaction by teachers (and indeed school students sitting these exams), which is at odds with the accepting tone of the initial online statements issued by the TUI and ASTI.

Since the shutdown of the schools secondary teachers have striven to continue classes and support students online. However, the realities have come to the surface of both inequality with many students living in homes without devices to receive lessons or without broadband as well as the unevenness of broadband coverage across the state. Students with special educational needs have suffered an even worse impact, as do students who are homeless, in Direct Provision, as well as Traveller students.

An abuse of teachers and students

The position of the Department of Education and Science on persevering with the Junior and Leaving Cert examinations is an abuse of teachers and students. The Department’s position now is that teachers maintain their practice of online teaching and support up to the end May and after a two week ‘holiday’ in the first half of June resume distance learning until mid July. In mid July they propose to bring sixth years and all teachers into the schools for a two week intense exam preparation period, with students broken up into smaller groups.

Then from 29 July until 2 September the Department proposes to hold a Leaving Cert exam each day with arrangements for rapid online marking. On top of this they propose to send the Junior Cert papers to the schools in September and for the schools to arrange the carrying out of the exams as well as in-house correction. This is an example of the Department using the Covid 19 virus as a Trojan horse to pilot a practice against which teachers in the ASTI struck only a few years ago.

All the above is then said by the Department to be conditional on the progress made in beating back the spread of the virus. Besides the question of whether or not exams should take place, these proposals raise questions about how a safe return to work should be organised. It has been already demonstrated across the public, private and semi-state sectors that the initiative for ensuring safe work practices and the shutting down of inessential work has had to rest with the workers on the ground.

Bosses as a class, including the Department of Education, have forfeited any right to call all the shots on this front. Instead, teachers, through their local union structures should control and supervise the process of the eventual return to work with guarantees on deep cleaning systems and social distancing via smaller class sizes — the latter of which can dovetail with a drive to reduce class sizes permanently.

Instead the position of the Minister and the Department was presented to the teacher unions with zero prior consultation and were tacitly accepted by both union leaderships, the TUI especially, whose leaders in an internal communiqué cited the emergency conditions as a justification.

However, in the intervening few days since the announcement by Minister McHugh there has been a virtual revolt of teacher members. The President and Vice President of the ASTI who attended the Minister’s announcement were challenged by members of that union’s Standing Committee for not challenging the proposals. There was also a missed opportunity to raise with the Minister and Department the lingering question of pay inequality as well as the need for automatic renewal of contracts for teachers on fixed term contracts to the end of this term.

Further meetings of the ASTI standing committee is scheduled this week to consider the proposals further and take positions. The TUI has to likewise formalise its position. This is a cue for local virtual branch meetings of both unions to take place as soon as possible. Thrashing out a common position will not be straightforward with various options being aired that can uphold the rights of teachers as workers as well as the rights and welfare of students.

For students the greatest stressor is the prospects of being expected to sit exams without preparation and support that would normally be available and the possible impact on their progress to third level. This stress is exacerbated by the fact that the Department says they won’t make a final call on the holding of exams until June. Come the summer, thousands of leaving cert year students will have experienced people in their family and community who have died or been hospitalised by this illness. Forcing them to take exams in such a scenario will only add to their anxiety and depress them.

This uncertainty should be brought to an end now, and as has already happened in other countries the decision should be made now to cancel this year’s Leaving Cert exam. Instead the Department should issue the Leaving Cert to all students.

Socialist Party members active in the teacher unions are arguing for:

·         No Leaving Cert examinations to be carried out this year- make the call now on this!

·         The Department should issue the Leaving Cert to students, confirming the subjects they were studying and at what level.

·         That unions and teachers locally exercise control and supervision of the eventual return to work including ensuring deep cleans of schools, and social distancing systems being achieved principally through reduction in class sizes and a recruitment drive of teachers by the Department to facilitate this

·         That there be no retreat on the demand for equal pay and no acceptance of further attacks on pay and conditions in the aftermath of the virus by the incoming Fianna Fáil/Fine Gael government.