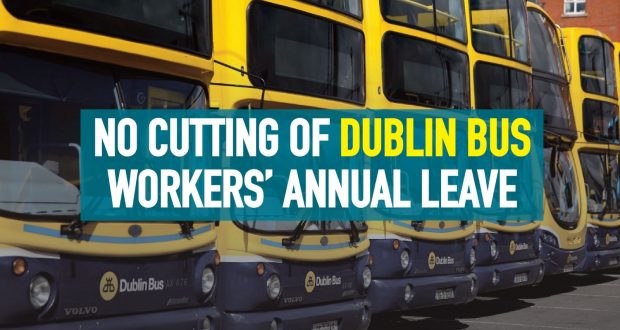 Dublin Bus management are steamrolling through their policy of enforced annual leave. I was given sight of a list of sixty drivers’ names that has been posted up on the wall in Harristown Garage yesterday, where they are being told they must take next Monday off.

The officialdom of the two unions that organise there are effectively going along with this legally questionable act, which drivers could in fact contest at the Workplace Relations Commission (WRC) down the road.

This enforcement of annual leave arises from the reduced Saturday schedule coming into force from Monday to Friday. This reduction was ordered by the National Transport Authority (NTA) and justified by them because of a decline in passenger numbers i.e. “business reasons”.

This alteration has resulted in a compromising of social distancing on the reduced services as those less frequent busses are now becoming fuller. This should have come as no surprise. A similar outcome was widely commented upon when Transport for London enforced a similar service reduction on the Tube two weeks ago.

The reduced service means that hundreds of drivers on a daily basis are being underutilised relative to their normal work schedule. In response, management communicated earlier this week by letter to each Dublin Bus worker that they had to take 10 days of their normal annual leave i.e. almost half, between 1 April and 30 June. Furthermore, those with untaken leave from 2019 would have to take up to an additional 10 days within the same timeframe.

Regrettably, both the NBRU and SIPTU officials came out of negotiations with the only change to management’s initial position being that five days of the normal annual leave would be taken between now and 5 May, after which there will be a review.

In circulars to their membership both unions’ officialdoms tacitly accept the “business case” i.e. the service should only run if it can make money. The NBRU went further, effectively guilt tripping the members into accepting this imposition on the basis that other workers have been laid off or had pay cuts. That is all the more reason for other workers to stand and fight, and oppose a race to the bottom.

Due to the (inadequate) state subsidy, the income support measures in place for private sector workers are not being made available to the commercial semi state leaving workers in that sector uniquely disadvantaged.

There is a deeper appreciation in society right now for public transport workers. Combined with this the manner in which the private coach firms wound up their services when the virus arrived and the reality of climate change makes an even more enhanced case for free public transport.

Rather than meekly accepting the “business case” of Dublin Bus management, the leaders of SIPTU and the NBRU should demonstrate some political imagination. Public transport is a crucial service and its existence should not be dependent on whether or not it makes money.

They should be majoring on the above points and forcing as a minimum the government and Dublin Bus management to maintain service frequency. This is a matter of public health. The annual leave entitlement of workers putting their health and safety on the line should not be robbed and action is needed to ensure that this is stopped.