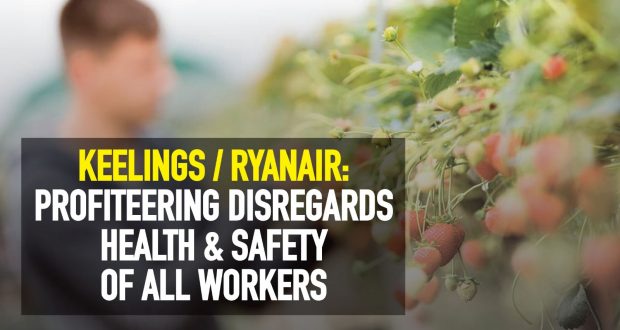 The decision by Keelings, a fruit company based in North County Dublin, and Ryanair to charter a flight from Bulgaria to Dublin with 189 workers on board in the midst of the COVID-19 pandemic has provoked outrage. It is yet another example of how the short-term profiteering of big business trumping the health and safety of workers, both migrant and Irish, as well as that of the public at large.

According to reports, no social distancing took place on board the flight, putting both the Keelings workers, cabin crew and Ryanair staff generally at risk.

The recent actions of Keelings, in terms of its callous treatment of its workforce, are not unprecedented. In 2016, the company successfully lobbied Fingal County Council to amend its plans and to allow the company to build sub-standard barrack-like accommodation for its workforce, directly adjacent to the farms on which they labour. This would see workers crammed into a 25-bed unit, as opposed to the previous plan of housing ten workers per unit.

This proposal was opposed by Socialist Party and Solidarity councillors Matt Waine, Eugene Coppinger and Sandra Kavanagh when it was forcefully advanced by then Fingal Council CEO, Paul Reid, now the CEO of the HSE.

Cramped living conditions is generally the lot of many migrant workers, owing to the precarious and low-paid work that they are in. Of course, this is true of many Irish workers as well, given how rampant precariousness and low pay are in the Irish economy. This means that these workers are particularly vulnerable to infection from COVID-19, given the difficulties they have in self-isolating.

Keelings’ annual turnover is €300 million per annum, with a workforce of over 2,300. This is not a small rogue employer; in fact, it is part and partial of the capitalist establishment in Ireland. It’s chairman, Joe Keeling, sits on the board of Horse Racing Ireland and its CEO, Caroline Keeling, sits on the state board, Bord Bia – both as Fine Gael appointees.

Like much of the food and service sector these bosses have profited immensely from the super-exploitation of migrant workers. They have cynically exploited their relative vulnerability by employing them on poor wages and conditions, thus creating a race to the bottom for all workers and maximising enormous profits in the process. This has been an approach they’ve adopted since the accession of Eastern European states into the European Union in 2004 and they’ve been facilitated every step of the way by successive governments.

No scapegoating of migrant workers

The 189 Bulgarian workers that arrived into Ireland at the behest of Keelings, and facilitated by Ryanair, are not responsible for the criminal disregard for health and safety both companies have displayed. In fact they are the potential victims of it. Any attempt to use this incident to whip up racism and anti-migrant prejudice must be stridently opposed.

Alongside their Irish colleagues, many migrant workers are working on the frontline of the COVID-19 crisis, in health, in retail, in food production and transport, and are often risking their health because of the lack of PPE. This crisis has demonstrated the critical role that they, and all workers play, in the provision of the essential services and goods that we need.

There must be a common battle amongst both Irish and migrant workers to ensure that their health and safety is secured in their respective workplaces and that there is workers control over health and safety. More broadly, this must be linked to the struggle to oppose the race to the bottom, for a living minimum wage of €15 an hour, an end to precarity and poor working conditions. All workers must have the right to decent affordable homes and, in the context of mass unemployment emerging, no workers should be pitted against one another.

The wealth and resources of society must be used to fund public investment in jobs for all. Major job-shedding companies must be brought into democratic public ownership. The trade union movement has a crucial responsibility to unionise migrant and Irish workers in order to organise such a struggle.

In 2004-2005, the Socialist Party through the work of its then public representatives, Cllr Mick Murphy and Joe Higgins TD, successfully exposed the scandal of migrant worker exploitation in the Turkish company GAMA construction. This subsequently resulted in successful strike action of these workers that delivered a blow to the race to the bottom in the construction sector and the economy generally. It is a glimpse of what is possible if a lead were given today. (Watch the following documentary produced by the Socialist Party on the GAMA strike- https://vimeo.com/3240952 )

“Capital is dead labour, that, vampire-like, only lives by sucking living labour, and lives the more, the more labour it sucks.” – Karl Marx

It is the low-paid fruit pickers of Keelings that produce the enormous profits the company makes, not the likes of Caroline and Joe Keeling, who merely benefit from the exploitation of the former. This is the nature of organised theft on which the capitalist system we live under is based.

Capitalism is a ruthless, inhumane system built on exploitation in the interests of private profit at the expense of the majority. Our health, safety and living standards are dispensable in this context. Globally, there are countless examples that graphically prove this in the context of the horrendous crisis we are enduring at the moment.

This system must go. It must be replaced by a socialist society where, combined with public ownership and planning of the economy, workers democratically run society in the interests of the many, not the privileged few.