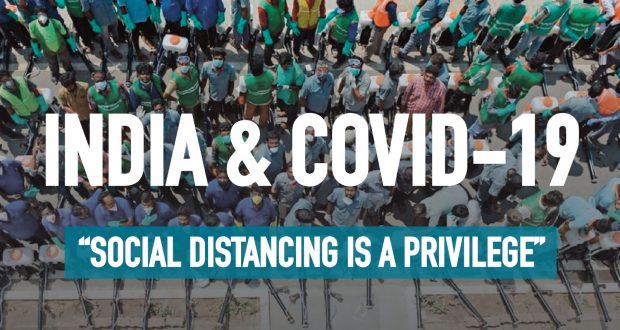 India and COVID-19: “Social distancing is a privilege”

On the 25 March 2020, Prime Minister Narendra Modi called for a 21 day lockdown in India, leaving the nation of 1.3 billion people approximately four hours to prepare for it. This announcement resulted in the country queuing up to panic buy groceries and essentials to stock up for the three weeks. Moreover, while essential services were to remain open and people were to be allowed out of the house to go to supermarkets and pharmacies, local police authorities made that next to impossible for many.

Over the next few days, several videos of police brutality cropped up, where officers were seen beating people up with canes to enforce the lockdown. A 32-year-old man who went out to buy milk in West Bengal and an ambulance driver in Pune suspected to be transporting passengers illegally were allegedly beaten to death. Vegetable vendors on the street and people delivering food were met with police violence in several cities, despite being deemed essential services. The lockdown resulted in major state repression of the working class.

Modi’s lockdown left millions of migrant workers in limbo. In the wake of the lockdown, tens of thousands of daily-wage migrant workers were left with no job and no pay, forcing them to leave the cities. Given that long haul trains were cancelled prior to the lockdown and other modes of transport also came to a halt, travel has become a major problem for these workers.

Thus, they resorted to walking hundreds of kilometres, crossing state borders to get back to their villages where they wouldn’t have to pay city rents and the food is considerably cheaper. Controversial measures were taken in Uttar Pradesh, where migrant workers returning home were doused in bleach sanitiser in order to kill the virus clinging on to their clothing. While the bleach was apparently not harmful to the body, chemical cleaning agents are generally harmful to skin, and would also not help if the workers were already infected with the virus.

On 26 March, approximately $23 billion was sanctioned to support the economically disadvantaged (less than 1% of India’s GDP), however, it did not reach those who were most in need.

On 29 March, the central government called for state borders to be sealed to curb migration and the spread of the virus, and also urged the states to provide food and shelter to the migrants. Social distancing has been emphasised repeatedly by the PM, however, for these migrant workers and the one sixth of the Indian population living in poverty, social distancing is a privilege they cannot afford.

On 31 March, an advisory document was released on how to manage the virus’ spread to rural localities due to the movement of migrant workers. The migrant workers were advised by the Ministry of Home Affairs to remain in their place of work / local residence and assured that they would not be evacuated. Those migrant workers who are on the way to their destinations have been advised to remain in whatever location they are in, in quarantine centres that were being set up, where further healthcare measures were to be taken.

No rest for the capitalist

Amidst the chaos and pandemonium, the most controversial measure was taken on 28 March. A Prime Minister’s “Citizen Assistance and Relief in Emergency Situations Fund (PM CARES)” fund was introduced asking the general public for donations to combat this pandemic, even though a Prime Minister’s National Relief Fund already exists since 1948.

This fund reeks of a capitalist agenda, with tax reliefs offered to donors, and no clarity given on how the funds will be used. Further, donations made by corporations will also be considered as Corporate Social Responsibility spending, a mandate that states Indian corporations meeting certain economic conditions have to set aside 2% of their average net profit for socially responsible expenditure. Moreover, any measures taken within the corporations against COVID-19, such as protective gear or preventive healthcare, are also considered to be CSR activity. Oil companies, multinational conglomerates and the rich have been unsurprisingly quick to donate.

It is evident that the Modi regime represents a super-rich minority. The lockdown was badly planned and implemented: the unorganised sector and the poorest were not accounted for in the plans, resulting in a possibly quicker rate of spread. Capitalism cannot manage crises that affect all of society, because capitalism only cares for the few. Working-class peoples’ individual efforts and frontline workers have been key in combating this pandemic, not money-making corporations that the Indian government strives to please. With catastrophically under-resourced healthcare systems, people creating affordable ventilators have been saving lives, as opposed to big pharma’s expensive equipment that people are paying for with their lives.