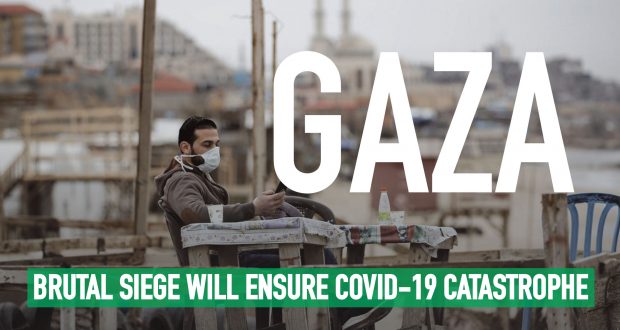 As relatively developed health care systems in Europe and North America are struggling to cope with the ravages of Covid-19, the people of Gaza are bracing themselves for what could be a massive humanitarian catastrophe should the virus take hold in the territory.

Home to two million Palestinian refugees, Gaza is an open air prison, whose refugee camps are the most densely populated in the world. The average Gazan has on average 0.8 metres of personal space and the territory is 365 sq km.

At time of publication there have been 12 cases of Covid-19 reported in Gaza yet fears of a rapid spread of the virus are strong.

Decades of a brutal occupation and siege by the Israeli state has seen Gaza’s population suffer enormous hardship. The blockade of Gaza has destroyed the local economy and has resulted in a social disaster. Half of workers are unemployed and an estimated 80% rely on international aid to get by.

Infrastructure is teetering on the brink of collapse with electricity blackouts half the time in any given day. The vast majority of the two million people in Gaza are living in overcrowded conditions.

Gaza’s water infrastructure is in such a poor state that only one in ten Gazan families have access to clean water and 96% of aquifer water is undrinkable. It is estimated that over 80% of Gazans live in poverty[1] resulting in bottled drinking water being unaffordable for many.

Gaza’s health service has been starved of resources under the siege. Due to restrictions imposed by Israel, hospitals are in shortage of essential basics such as sterilising equipment and medical devices. Rami al-Abadleh, a director in Gaza’s Ministry of Health, has been quoted in the press as stating that “Our ventilators are hardly sufficient and would only be able to accommodate a maximum of 100 patients across the strip.”

“Currently, there are 45 intensive care beds in all of Gaza’s public hospitals, and they are often occupied by other patients with heart and lung diseases,” al-Abadleh added. “This is why the spread of the virus in Gaza would constitute a real catastrophe.”

He is not alone in warning about the impact that Covid-19 could have in the territory. Michael Lynk, the UN special rapporteur for human rights in Palestine, warned last week, “Its stocks of essential drugs are chronically low. Its natural sources of drinkable water are largely contaminated. Its electrical system provides sporadic power. Deep poverty amid appalling socio-economic conditions is prevalent throughout the strip,” he said. “Gaza’s population is also a physically more vulnerable population.”[2]

Despite the massive threat that Covid-19 represents to Gaza, the Israeli state has not eased the blockade. They have actually continued to block the importation of vital health equipment. They have also refused to even commit to allow Gazans who become ill to access treatment in Israel or the West Bank should Gaza’s health service become overwhelmed.

As across the globe, the Covid-19 crisis is deepening and exacerbating the horrendous oppression on which capitalism is built. The brutality of the Israeli occupation of Palestine and blockade is no exception.

The crisis has highlighted the callous nature of the Israeli ruling class, fully backed by the US, as well as that of the Egyptian dictatorship of Abdel Fattah el-Sisi, who is helping the former to maintain the siege of Gaza. This siege, the occupation of Palestine and the rule of this oppressive capitalist regimes can be brought to end by a mass movement of the Palestinian people, linked with the working class in the Middle East, including the Israeli working class. A democratic, socialist Middle East would allow all its peoples the right to self-determination and to live a humane and dignified existence from poverty and oppression.