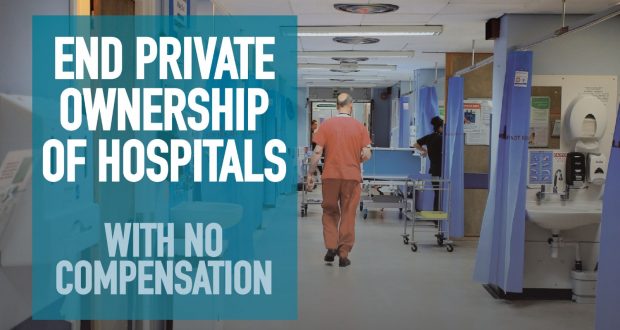 The severe pressure the health service has come under from the Covid-19 outbreak has led the government to temporarily take over the running of private hospitals in the state. In doing so, they have acknowledged the inability of our two-tier health service to tackle this pandemic. This is a system that is inherently unequal and unjust. It is based upon a public side that is drastically underfunded as a result of decades of austerity and cutbacks, while the for-profit private sector remains fully resourced on the basis of your ability to pay.

The government’s recent decision has been commended as a move towards a single-tier health service and even referred to as “nationalisation.” Health Minister Simon Harris’s claim that “that there is no public versus private” in the battle against Covid-19 plays into this, as if this is acceptable for accessing health services generally. In reality, the plan outlined involves a rental/payment scheme for private insurers that will revert to type when the deal ends.

This plan lasts for three months, with the basis for extending it each month after that. It remains unclear how much the cost of rental will be. The attempt to do this has run into opposition from highly paid, private consultants. An under-resourced health service that is often stretched by the winter flu season has forced this move.

The role of the church

It is worth nothing who is running these hospitals. The largest private healthcare group is Bon Secours, which runs five hospitals, one each in the four largest cities in the state and another in Tralee. This private hospital group was founded by the religious order which has become synonymous with the notorious Tuam Mother & Baby Home, and two nuns sit on its board. A defence of the role of the Catholic Church is often mounted on the basis that they provided services that the state was unwilling to provide. These examples show how they are more than willing to provide healthcare with a Catholic ethos for only those who can afford it, and make a profit in doing so.

Other religious orders expanded their religious ethos into profitable pastures – the Mater Private was owned by the Sisters of Mercy before being sold off. It is currently run by the French company Infravia Capital. Let’s not forget that the Catholic Church owes €1.3 billion to the State in redress for the survivors of physical and sexual abuse in the former institutions.

The figures involved in private hospitals are much the same as in other sections of the Irish capitalist class. Beacon Hospital is owned by Denis O’Brien. Ireland’s most prominent Beef Baron, Larry Goodman, owns the Galway Clinic, the Hermitage Clinic and has shares in the Blackrock Clinic. These are amongst the richest and most powerful people in the country and are two of Ireland’s 17 billionaires. For them, these are simply investment opportunities to add to their wealth. For example, last year Blackrock Clinic made €12.4 millions in profits.

It is not acceptable that they benefit from state money. Both O’Brien and Goodman benefit from the status of being “tax exiles”, i.e. they do not pay a penny in tax in the country, as long as they are only resident here for a maximum of 183 days per annum. This deal is not the first time that they have benefited from contracts for the public sector.

There is a need for real nationalisation of the health service, with democratic public ownership over the private hospitals in this state. In doing so, there should be no compensation of its wealthy owners and institutions. There should also be no going back to the two-tier health system, and instead there should be a single-tier, secular public system, free at the point of use. At the base, we can end the obscenity of our health being commodified for profit.