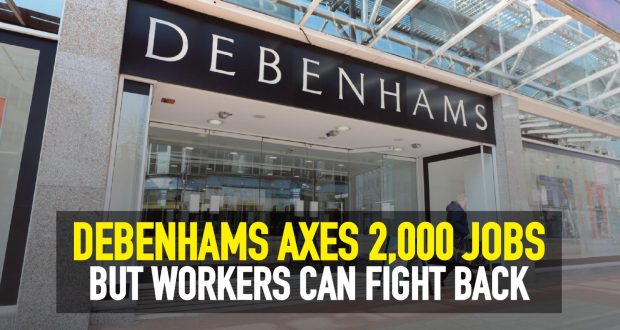 Debenhams axes 2,000 jobs – But workers can fight back

Debenhams announced the closure of all its 11 shops in the Republic of Ireland on the Thursday evening before the Easter Bank Holiday Weekend. At the same time they announced that their UK operations were being put into administration.

The High Court has since appointed a liquidator for the Irish shops.  These closures mean the loss of more than 2,000 jobs.

Workers received news of the closures by email just half an hour before the news broke in the media. Some of these workers had given decades of service to the company.  The company intends to pay them zero redundancy pay and put the cost of the minimum two weeks statutory redundancy onto the shoulders of the Irish taxpayer.

Debenhams used the Covid19 crisis as cover for a decision that they had probably intended to make in any case. Despite this, the company is no doubt just the first of many such closures that will be announced in the weeks and months ahead.

As if to underline this point, within a week of the Debenhams bombshell we saw the closure of all the Oasis and Warehouse fashion shops throughout the state with the loss of nearly 300 further jobs. The Debenhams closure is therefore a test case — for workers, for trade unions and for the state.

The role of Bank of Ireland

This means that a bank which was bailed out by the Irish taxpayer and in which the state still holds a stake was part of the wrecking operation which axed 2,000 plus jobs here and attempted to flee the scene of the crime without paying so much as one penny in redundancy.

The caretaker government must not be allowed to get away with their Pontius Pilate hand washing act — they must accept the state’s share of responsibility here and push for Bank of Ireland to reverse its position and protect the jobs. This should be linked to taking the banks into full democratic public ownership.

The Mandate trade union has a vested interest in pulling out all the stops in a fight to save the jobs. If Debenhams, Oasis and Warehouse are allowed to topple as the first dominoes, the chain reaction could end up costing the union a very large portion of its overall membership. Lloyds Pharmacy have also moved to lay off workers.

Retail workers are playing a key role during the pandemic and united action by retail workers to defend workers interests against these multinationals would be powerful. The union has demanded that the company books be opened for inspection by workers and their trade union representatives.

An inspection would provide important pointers as to how the business could be maintained in public ownership perhaps with some diversification and a new sales strategy. The online profits of the company should also be factored in. To their credit, Debenhams workers have refused to allow the story of this injustice be buried underneath the daily mountain of coronavirus news.

They have gone on social media and taken to the airwaves highlighting the injustice of the closures and campaigning for a better redundancy deal. The fact that Debenhams have millions of euro of stock left in their Irish stores gives the workers an important potential pressure point. The stock should not be allowed to leave the shops while Debenhams try to flee the country without paying so much as a penny in redundancy.

Should the workers take the step of organising protest outside the shops they will deserve the support of all working people. Yes, strict guidelines are in place to combat Covid-19 but unfortunately the Debenhams bosses didn’t wait until after the lockdown to shut the shops.

Protest action which pays strict attention to health and safety and social distancing is justifiable in these circumstances — workers’ livelihoods are on the line. Most of the workers are women and many families rely on their wages. The Debenhams closure will have a major impact on a number of communities. Any protest actions will be fully supported by the Socialist Party.