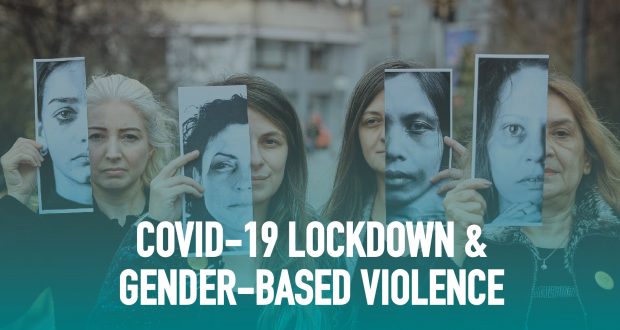 As the outbreak of Covid-19 began to take hold, experts warned of the risk of increased gender based violence and abuse of children. Intimate partner violence increased significantly during the HIV / AIDS pandemic, Ebola and Zika virus outbreaks. Research from previous pandemics and disease outbreaks align with what we’re now seeing emerging from Covid-19.

In capitalist society, poverty related stress and economic insecurity are heightened during times of crisis such as a pandemic. When unemployment skyrockets and people are faced with high rents, utility bills, mortgage repayments; that stress can exacerbate underlying problems which in turn can be triggers for instances of gender-based violence.

When family members are in close proximity, in stressful situations, under duress for extended periods of time, rates of violence against women soar. Quarantine increases the exposure of women to their abusers. With many now working from home or unemployed and children off school, there is little or no chance of escaping abusive situations.

For many women “Stay At Home” doesn’t mean staying safe. Access to services by phone can even be difficult if calls are being monitored by a controlling partner. If there are mental health or addiction issues within a living situation it can further provoke violence. First responders that may be relied upon at other times are redeployed to aid with the pandemic and referrals that survivors rely upon may now be unavailable. Women may not seek help for physical injury for fear of infection.

In China’s Jianli County, the local police station reported receiving 162 reports of intimate partner violence in February – three times what was reported in February 2019. In the UK, 16 suspected domestic abuse killings occurred between 23 March and 12 April. France’s interior minister said that reports of domestic violence across the country had jumped by more than 30% since the lockdown began. One anti-femicide campaigner said, “Coronavirus has not created additional violent, abusive, men. These men were violent, abusive, and controlling before. The Coronavirus lockdown has created conditions that give men excuses and additional triggers. We can’t just be horrified about it now. We should always be horrified about it.”

Women make up 70% of the health workforce worldwide and are regularly subjected to abuse and harassment from male colleagues, patients, and partners. Only a few weeks ago we heard the horrific news of Victoria Woodhall, a NHS nurse stabbed to death, outside her home by her husband of seven months. Another case was reported in Italy of a trainee doctor murdered by her partner due to his jealousy of her staying connected to family and friends via video calls.

What needs to be done

While governments globally, including the Irish government, have recently thrown a paltry amount of funds at the problem of gender violence during the pandemic, we have also seen moves like that of the Polish government rolling back on women’s rights, with attempts to further restrict abortion services.

In the previous FG government’s 2020 budget, domestic violence services received just €20 million in funding and sexual violence services only €5 million. By comparison, the cruel Greyhound racing industry received €17 million. Women’s refuges and rape crisis services are inundated with people seeking help. As well as good quality, properly publicly funded, and democratically run services (including education and outreach) there needs to be a struggle to challenge gender violence in all its manifestations.

The trade unions have a crucial role to play in this, organising as they do hundreds of thousands of workers of all genders. Workers in healthcare and retail, a majority of whom are women, are on the frontline of this pandemic and the value of these workers is being recognised more than ever. This opportunity must be used to press home the needs of these workers – social and economic – as well as women as a whole.