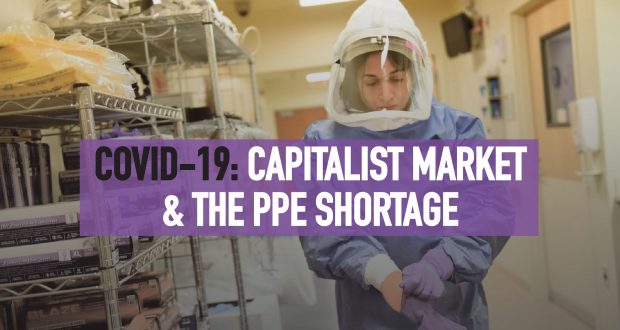 Throughout the COVID-19 crisis workers in various essential services have gone beyond the call of duty to help the rest of us feel safe and secure, from supermarket staff to pharmacy workers to public transport personnel and others. Arguably, it is those front-line workers in our hospitals who have proven themselves not just essential but the difference between life and death for individuals and families alike.

These are the people the rest of us rely on when we are at our most vulnerable, which is why it’s absolutely scandalous that many of these workers are not being provided with the correct personal protective equipment (PPE) to help treat infected patients safely. They are literally being forced to gamble with their own health (and that of their families and loved ones they go home to) in order to do their jobs.

Why so many shortages?

Years of cuts and under-resourcing within our health service by successive governments have left workers and the public now at a much greater risk. Of course shortages of PPE are not just a problem here in Ireland, North and South, this is happening in virtually every country affected by the coronavirus. The world health organisation has called for a 40% increase in the manufacture of PPE if supply is to keep up with demand.

This then begs the questions: why after several weeks (months in some cases) has the capitalist system failed so miserably to provide the essential equipment that is needed to tackle this crisis head on? And why were international organisations and different states so underprepared — when it’s been known for some time that such a pandemic was not just likely to occur but was in fact expected?

After the SARs outbreak in 2002-04 and again following the Ebola outbreak in 2014 many countries (including the US) ran simulations and exercises to see what would happen in the event of such a crisis as the world is now experiencing. Shortages in supply of PPE was one of the main issues that the studies revealed.

Product of an inefficient system

On the surface, part of the problem is blamed on the fact that prior to the coronavirus outbreak more than half of the world’s PPE was produced in China, and once the virus took off there China started to use up that supply while other countries, such as Germany, have imposed restrictions on the export of certain PPE equipment. But if we delve a little deeper, it becomes clear that the problem is more of a systemic one.

The system of production for profit instead of human need is the real source of this problem. The nature of capitalism means that the more something is in demand the higher the price it can be sold at, and the more profit can be made from its sale, and this applies especially if the supply of said item is extremely limited. Therefore it is not in the interest of private for-profit companies to fully meet the demand in the short term, if more money can be made by partially meeting the demand over a longer term — allowing for the prices to remain inflated.

In theory other companies should get involved in such a profitable market to make up the shortfall. In reality that’s not happening, probably due to the economic climate (the worst downturn in history) being an uncertain time to start a new venture that may not be viable in the long run. As it happens, only state-run public companies (or perhaps private companies being directed by states) would be willing and able to take on such a challenge, with the urgency that’s needed, but due to the neo-liberal ideological persuasion of most governments this is not happening either.

Ireland is currently home to several medical device manufacturers, many of whom produce the kind of equipment that is now in such high demand. But another problem with private companies like these is that they sell their products on a first come first serve basis, often to the highest bidder which means that the essential equipment often doesn’t go where it is needed most, but rather to the place that can most afford it. In the context of a world pandemic, with hundreds of states competing with each other to supply their own health services, this model of distribution actually imposes barriers, not solutions to solving the problem — which is a global, not a national one. Inevitably, the poorest states and poorest people will lose out in such a race.

The alternative to this rotten system is to use the economic, natural and human resources of society to meet society’s needs, whatever they may be. Such an alternative — a socialist alternative — would take ownership of the economy, and therefore control, out of private hands. On that basis a plan of production and distribution could be drawn up to replace the market as the foundation of the economy. This would provide us with the ability to quickly recommission factories to produce the medical supplies and PPE that we need in order to tackle this crisis head on, and to use the productive capacity at our disposal to most effectively solve this and other crises.

Industries would be in common public ownership and would be run by and for workers and production would be based on the needs of society as a whole rather than the profits of a tiny section. Such a system would coordinate efforts internationally in the interests of all humanity, rather than countries being forced to compete against one another in a battle to supply basic necessities.

And instead of numerous companies around the world competing with each other to find a vaccine for Covid-19 because it’s in their business interests, the scientific expertise globally would cooperate and pool knowledge and resources to find the vaccine because it’s in humanity’s interest.

This is the kind of system we need in order to tackle not just the coronavirus, but the innumerable problems that the world faces today, not least among them being climate change. Join the Socialist Party today to start building for such a future.