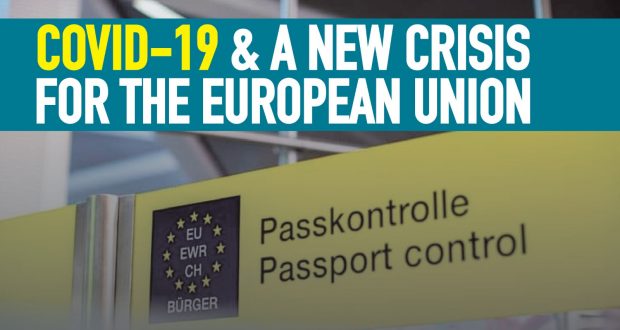 The Covid-19 crisis has exposed all the contradictions at the heart of the capitalist system. As well as an unfolding human tragedy, we face an economic crisis which many serious commentators predict will be deeper than the 2008 Great Recession.

This crisis will have major ramifications for the European Union, which has already been left undermined by the previous crisis. An illustration of the seriousness of this was the rare intervention by Jacques Delors – the former European Commission President who oversaw the introduction of the single market – who warned of “a mortal danger to the European Union”.

Part of the problem

The capacity of health services across the world to deal with this pandemic has been undermined by years of austerity and decades of neo-liberal policies which have led to cuts and privatisation of services. National governments – and in some cases regional/devolved administrations, such as the Stormont administration in the North – were key to the implementation of these policies. However, the EU has also been an important and significant driving force, pushing privatisation and cuts across the board.

This has been done through its neo-liberal rules, such as those contained in the Stability and Growth Pact, which requires member states to keep their budget deficits below 3% of GDP. In the case of Eurozone countries, governments can be fined if they do not respect the limit. These rules were drawn up in the interests of Europe’s financial markets and bankers to ensure their debts are paid at the expense of public services. A report that came out last month showed that the European Commission (one of the unelected bodies that dominates the EU) made 63 individual demands on member states to cut spending on healthcare provision and/or privatise healthcare services between 2011 and 2018.

These demands mainly concerned “peripheral” countries that were deeply hit by the EU debt crisis in the 2010s, namely Greece, Spain, Italy, Ireland and Portugal. Our health services were put on the chopping block so that Europe’s private banks and bondholders could be bailed out. For years, politicians of the capitalist establishment insisted that they could not implement countless measures – such as increased spending on public services and state intervention into the economy – because of the EU’s rules. Now, the EU has been forced to suspend these rules in the face of this crisis. However, it all seems too little, too late.

“European solidarity does not exist”

An illustration of the extent of the crisis facing the EU is seen in the comments of Serbian President Aleksandar Vučić, who has been pushing for Serbia to join the EU. He commented that, “European solidarity does not exist. That was a fairy tale on paper.” His solution was to send “a special letter to the only ones who can help, and that is China.”

In reality, Vučić was reacting to the experience in Italy. Despite the fact that the Italian government activated the EU’s mechanism of civil protection to ask for supplies of protective medical equipment in February, they received no assistance for weeks. On 10 March, Italy’s EU ambassador wrote that, “not a single EU country responded to the Commission’s call.” It was only on 15 March that the EU’s Industry Commissioner informed them that respirators and medical supplies were on their way from France and Germany. Meanwhile, China has been quick to provide medical supplies across the world, including to Ireland. China is exercising “soft power” in order to strengthen its position on the world stage.

Several member states, including Germany, even placed restrictions on the export of medical supplies early in the crisis and only removed them under pressure. An incredible example of the “every nation for themselves” approach was seen when medical supplies from China destined for Italy were seized en route westwards by the Czech Republic.

This reflects a suspension of one of the “four freedoms” of the European Union – the freedom to move goods. But it is not the only one. The free movement of labour both into and within the European “Schengen” area has also been suspended, just as Schengen was meant to be celebrating its 25th anniversary.

What is significant is that this suspension was not part of a coordinated approach by the EU. When it announced a 30-day suspension of the Schengen Agreement on 17 March, it was already a fait accompli, as most member states had already announced restrictions on freedom of movement at that point, or were preparing to do so.
Coronabonds

The most important act of the European institutions has been the decision of the European Central Bank (ECB) to launch a €750 billion stimulus programme. This is in large part due to concerns over the redevelopment of a new debt crisis. Italian bond yields (the rate of interest on its debt) had begun to rise in March, making it more expensive for Italy to borrow money, raising concerns that it would be unable to maintain its existing debt, which currently stands at €2 trillion. It was also a realisation that their previous prediction of a short, sharp “V-shaped” recession was fanciful.

European governments want further measures to be taken. Nine of them wrote to the European Council President, Charles Michel, prior to a virtual EU summit on the crisis, calling for “a common debt instrument issued by a European institution to raise funds on the market on the same basis and to the benefits of all member states”. In reality, this proposed ‘Coronabond’ is a rehash of the ‘Eurobond’ – the idea that the EU should collectively issue bonds, allowing economically weaker member states to access credit more readily and at lower interest rates because repayment is guaranteed by the bloc as a whole. This is a proposal which several member states, including Germany and the Netherlands, consistently opposed during the Eurozone crisis in the early part of the last decade. They still have major reservations about it, despite the depth of the economic crisis that is developing in Europe.

The preference of the German Prime Minister, Angela Merkel, is that these governments seek access to cash via the European Stability Mechanism. Such “assistance” would likely come with conditions such as the further slashing of social expenditure, which would be extremely unpopular in the midst of this crisis. A more blunt approach was put forward by the Dutch Finance minister, Wopke Hoekstra, whose government is pursuing its own variant of “herd immunity.” He argued that the EU “should investigate countries like Spain that say they have no budgetary margin to deal with the effects of the crisis provoked by the new coronavirus, in spite of the fact that the Eurozone has grown for seven consecutive years” – an idea that was un-diplomatically referred to as “repugnant” by Portugal’s Prime Minister, António Costa.

These divisions have left the key figures leading the European Union flat-footed and forced them into a zigzag. This was clearly seen in the comment of the new head of the ECB, Christine Lagarde, who stated that it was not the job of the ECB to “close the spread” in sovereign debt markets. The new President of the European Commission, Ursula Von der Leyen, argued that the idea of “Coronabonds” was “really just a slogan”. Now, both of them have made effective U-turns, stating that all options are on the table. This reflected the fact that Charles Michel, the new head of the European Council, had to organise a compromise at the European Summit which effectively kicks the question of “Coronabonds” slightly down the road.

EU and the nation state

What is demonstrated in this crisis, as it was during the Eurozone crisis, is “Europe’s centrifugal forces are becoming more powerful in the pandemic”, as an editorial in the pro-EU Guardian newspaper put it on 2nd April. This is particularly seen in the debacle regarding the Coronabonds, where the interests of the peripheral countries, the weaker and smaller capitalist economies of the EU, are at odds with its “core” countries, notably Germany and the Netherlands. This crisis again potentially poses a real existential threat to the Euro and even to the EU itself in the medium to long term

Fundamentally, what has been exposed is that, while it has gone a long way down the road of “European integration”, the EU has not overcome the limitations of the nation state. This is a limitation that is inherent in capitalism and reflects the tensions between capitalist states, each vying to defend the interests of its respective big businesses. The EU is not a unified entity with one capitalist class, but rather the coming together of national capitalist classes from across the continent. It is first and foremost a common market, within which a currency union operates, where states collaborate with one another in competition with other trade blocs. This crisis, however, lays bare the reality that they are not prepared to carry each others’ burdens.

The hollowness of the EU’s “solidarity” in this crisis can also increase opposition to the EU – demonstrated by Italian mayors (often from the right-wing parties) taking down the EU flag. This in a country where even before Covid-19 (according to a European Parliament poll in late 2019) only 37 percent of citizens saw membership of the EU as “a good thing”.

A socialist Europe is possible

Socialists have a responsibility to consistently oppose the European Union and expose it for the bosses’ club that it is. It is of note that some of those on the left who argued in favour of the EU in the recent Brexit debate have been forced to recognise the reality. For example, Yanis Varoufakis, former Greek finance minister and prominent campaigner to reform the European Union, said in the face of the Coronavirus crisis, “I don’t think the EU is capable of doing anything to us other than harm”, and said that people in Britain were right to vote leave the EU.

At the same time, we have to be clear that the real alternative to the EU is not a retreat into narrow nationalism, as envisaged by those on the right who oppose the EU. Instead, we need real solidarity and real internationalism. In the course of this crisis, working-class people have shown both, including taking up similar tactics of struggle, such as walkouts to close non-essential workplaces and demand adequate health and safety measures. A common struggle across Europe against capitalism can lay the basis for a very different Europe – a socialist one, based on the real solidarity of working-class people. 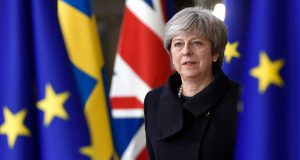