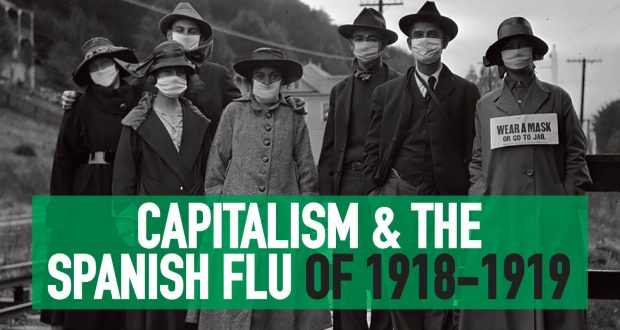 The 1918-1919 “Spanish Flu” killed between 50-100 million people, more than the number of deaths in the First and Second World Wars combined. According to expert Laura Spinney the Spanish flu “re-sculpted human populations more radically than anything since the Black Death.”

The influenza epidemic began in the spring of 1918, quickly spreading throughout Europe due to the movement of WWI troops. Up to half of British soldiers and three-quarters of French soldiers were infected as it ran rampant among the malnourished soldiers, crammed in rotten trenches and army camps.
As the virus mutated, shocking new symptoms developed, including people turning blue from oxygen deprivation and prolific bleeding, the death rate skyrocketed, particularly among young adults in their prime, such as soldiers. This is now thought to have been caused by an overstimulation of the immune system, a cytokine storm, as well as secondary infection such as pneumonia. But doctors of the time were baffled. While the origin of the virus is still disputed, there is certainty that this pandemic would not have occurred without the transporting of troops, diversion of resources and damage to the health of soldiers and civilians as a result of the First World War.

“Keep calm and carry on”

Despite the most devastating pandemic in history unfolding before their eyes, the propaganda machines of the imperialist countries were in overdrive to suppress, deny and downplay the crisis to maintain morale and patriotic appetite for the war and give nothing away to their enemies. Only the press in neutral Spain reported on the outbreak, giving the flu its name.

In fact the suppression of the truth regarding the scale of the current pandemic is something that has been attempted in recent weeks, notably by Trump in the US and the Tories in Britain, although much less successfully due to the access to information and communication in the modern era.
In Philadelphia in 1918, health officials approved a liberty parade attended by 200,000 people, resulting in 759 deaths a week later. As mass graves were dug, schools closed and public gatherings banned, one newspaper announced “This is not a public health measure. There is no cause for alarm.” US President Woodrow Wilson never made a public statement about the disease at all.

Arthur Newsholme, Britain’s senior medical officer decided that “the relentless needs of warfare justified incurring [the] risk of spreading infection” and urged people to calmly “carry on”, a slogan later popularised by WWII propaganda. For capitalist governments on both sides, winning the imperialist war was paramount, regardless of the human cost. Redirecting resources to care for the health of the population was out of the question.

Impact of the pandemic

When troops started dying in huge numbers, from flu rather than warfare, governments began to take notice, but early social distancing measures were primarily the result of necessity. As people fell ill, there were not enough healthy teachers and workers to keep schools and factories open. Working-class people were distrustful of the state’s propaganda and in the absence of information intuitively self-isolated to avoid catching the disease.

The war brought hardship and tragedy to the working class, on the front lines and at home, but the Russian Revolution in October 1917 inspired workers around the world to struggle for a better future. Uprisings occurred around the world during this period, most famously the German Revolution 1918-1919, and in Ireland (where 15,000 died from the flu) we saw the general strike against conscription in 1918, the 1919 Belfast Engineering strike and 1919 Limerick Soviet.

Both the war and the inadequacy of the response to the pandemic exposed the governments and the entire system as working against the interests of the working class. The exploitation of India’s people and land, for example, and the failure of the British colonists to provide a health system led to 17 million deaths, or 5% of the entire Indian population, further fuelling the anti-colonial struggle in the country.

The global devastation caused by the Spanish flu had a profound impact on the consciousness of working people across the world. It showed that the health of society was a collective issue, not an individual one. It challenged the prevalent ideology that “the great unwashed” (as working-class and poor people were disgustingly and pejoratively referred to by the ruling class), only had themselves to blame for becoming ill, since the sheer scale of the crisis affected the wealthy and officer class as well.

In the following years, the idea of socialised medicine, that was free and accessible to all, began to gain enormous traction. Soviet Russia was the first to develop centralised public healthcare, followed by others in Europe, leading to a comprehensive universal health system, the NHS, later established in Britain after World War Two. In 1924, the Soviet government outlined a vision in which living, working and social conditions were seen as key drivers of health, again way ahead of capitalist countries
Universal healthcare was a huge leap forward for workers and ordinary people, who no longer had to pay self-employed doctors, rely on religious orders or go without. But where these gains were won they have been widely undermined in recent decades by neoliberal cuts and privatisation, leaving us unprepared for the current pandemic.

All the medical advances of the last hundred years cannot overcome chronic underfunding and understaffing of the public health system. Capitalist ideology, and the main capitalist parties in every country, are fundamentally opposed to the idea of free healthcare for all, and they will never provide it. Only a genuine socialised healthcare system, publicly owned and democratically planned and controlled by medical workers and patients, will be able to provide the kind of healthcare necessary to withstand this kind of crisis.