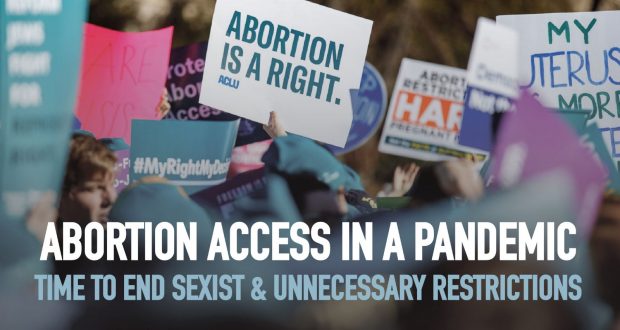 You may be finding it difficult to get though to your GP in the south of Ireland right now, but abortion is still available up to nine weeks for free through GPs and up to 12 weeks in hospitals. The government has announced that the two legally required doctor consultations can now be conducted over the phone, something they denied when the legislation was first brought in. Of course the second consultation is still a waste of medical resources and was not brought in for any medical need, but just to placate the conservatism of some politicians.

Nonetheless, it’s a significant concession making accessing early abortion with pills at home a bit easier. ROSA – Socialist Feminist Movement and Socialist Party activists are campaigning to ensure that this easier accesss (i.e. a choice to do a phone consultation with your GP if this is what you would prefer, in order to access abortion pills) remains in place after the pandemic crisis has subsided, as well as for the lifting of all of the remaining medically unnecessary restrictions on abortion care.

Irish clinics (e.g.IFPA & Well Woman) have scaled back non-essential services but are maintaining abortion services and conducting as many appointments as possible over the phone. Receiving medication through the post is still not allowed however so it will still be necessary to physically go to pick up the medication. Abortion after 12 weeks is extremely difficult to access so people usually travel to the UK in that situation. However during this pandemic that is much more difficult. Anti-abortion restrictions are always bad for women and pregnant people’s mental and physical health but when a potentially deadly virus is restricting travel this all becomes more stark.

A key demand of the Irish abortion rights movement has always been that a medical procedure should not be restricted in legislation. In most cases medics are trying to adapt to providing essential care during the challenges of this pandemic free from legal concerns but abortion is different because of the insistence of the conservative political establishment, even after the incredible repeal movement and victory, to persist with this exceptional approach to legally codify details of a medical procedure precisely because of a continued sexist view of pregnant people’s bodies and lives.

The stress that pregnant people go through when trying to organise an abortion is often high in the best of times. The isolation, difficulty accessing doctor’s appointments and potentially even difficulty getting to a shop to buy a pregnancy test all serve to make this much worse, not to mention the massive pressure of job losses of pregnant people or their partners. Particularly vulnerable are women trapped in abusive relationships – the lockdown period being a nightmarish situation for them.

As always, these mental health stressors are exacerbated by class division – those quarantined in cramped and inadequate accommodation; those workers on the frontline in healthcare, retail, sanitation, the majority of whom are women workers; those single parents most at risk of poverty – are all particularly exposed to extreme mental health pressures at this time. While never easy, a crisis pregnancy in the midst of the pandemic would be exceptionally difficult for these working class and poor women.

Disgustingly, there are a number of examples of right wing politicians taking advantage of the pandemic to impose their reactionary and misogynistic agenda. Despite abortion pills being on the WHO list of essential medicines for many years, several states have deemed abortion ‘non-essential’ and deferred all procedures and forced clinics to close, even those which were dispensing pills for home use. Pro-choice and civil rights organisations have had some success challengling this in the courts.

The situation in Texas has gone back and forth. How dare the conservative political establishment gamble with women and pregnant people’s health and lives in this way? It says a lot about the confoundingly warped mindset of the anti-choice brigade that they rub their hands in excitement about the ‘opportunity’ that the exceptional unfolding human tragedy of the coronavirus pandemic provides for them to try to push through their misogynistic agenda and laws.

Doctors across the US are moving to provide telemedicine support where possible for other health issues, but this is banned by the FDA for abortion as Mifepristone (the first step in the medical abortion process) is only legally allowed to be dispensed in clinics. Pro-choice organisations and 21 attorneys general are pushing for this to change citing correctly that it’s medically unnecessary and forcing people to leave home risking further spread of Corona Virus.

The UK government has also gone back and forth but is now allowing medical abortion to be accessed without face to face consultations. After considerable pressure from pro-choice campaigners the situation has also changed in Northern Ireland. Activists around Europe are pushing for similar actions. In India where a lot of abortion medication is manufactured and usually easily accessible there are reports of the police beating people up for leaving their homes and access to doctors to get prescriptions has become more difficult. In some good news coincidentally New Zealand has decriminalised abortion up to 20 weeks.

In Italy, in the worst affected regions, hospitals which already had low numbers of doctors who preformed abortions are busy combatting Covid-19 and hospitals in nearby regions don’t want patients arriving who may bring Coronavirus with them. Medical abortion is only available up to seven weeks and must be prerformed in a hospital. This is a completely over the top restriction for a procedure that is safe to do at home with proper advice and support up to ten weeks gestation.

Travel bans and difficulties will have a massive impact on abortion access. The old Irish solution of travel to the UK for abortion access was by no means exceptional. In Mexico city abortion medication is free and available up to 12 weeks, pregnant people usually travel from across the country to access it. In an effort to avoid spreading the virus people are now stuck in other regions where abortion is banned. Even in Canada, where there is no legal restriction on abortion, access is patchy and varies from region to region, those in rural areas will now face much more difficulty. Telemedical services Women on Web and Aid Access are now hindered by borders being closed in certain countries.

In Poland only exceptional abortions are legal, many would usually travel to Germany to access abortion. The right-wing government are now trying to ban the few exceptions where abortion is allowed while the pandemic prevents major on-street protests like those which stopped similar attempts in recent years. After massive online actions and some small but important actions on the streets, with social distancing, the government has temporarily deferred this attack. In this context, the “Rosa Polska” campaign has been established by International Socialist Alternative activists to assist the building of the struggle to resist the right-wing attacks and to build the socialist feminist wing of the movement.

In many capitalist countries the right to abortion access was won decades ago. Under a system based on inequality and exploitation there is a need to defend these rights again and again. Trump’s racist rhetoric and Putin’s attacks on LGBTQ people are not just because they are backward individuals. They are an attempt at divide and rule by scapegoating marginalised groups. These attacks must be fought relentlessly by the trade union and wider working-class movement. The global feminist movement has mobilised in huge numbers and defended and won key rights in recent years.

If right-wing forces seek to stir up sexist ideas under the guise of ‘family values’ or similar they must be challenged and defeated by a united working class movement, with women and LGBTQ people playing a leading role. The Coronavirus pandemic poses significant challenges to the capitalist establishment – they cannot be allowed to target women’s rights in an effort to distract from the profit-system’s inability to provide PPE, to sufficiently invest in public health etc.

Socialist-Feminists seek to end all oppression and exploitation. We will not accept a system where our essential right to bodily autonomy is used as a political bargaining chip. We are fighting for a socialist future where all health services are guaranteed including sexual health, abortion access, fertility treatment and maternity care. With workers battling on the frontlines without adequate PPE contrasted heavily with stories of billionaire self-quarantining on luxury yachts, the coronavirus crisis has exposed the class divide at the heart of capitalist system, as well as the power and potential of working people versus the parasitism of the billionaire profiteers.

We can’t go back to ‘normal’ when normal was a denial of rights for the vast majority of the world’s population. Gender violence has spiked globally in the context of quarantine. In Poland and the US, the right wing are attempting to sneak in swingeing attacks on abortion rights. Over recent years , a growing mass feminist movement has erupted globally – the Covid19 crisis is exacerbating oppression and inequality but it’s also crying out for a furthering of these mass struggles and for a Socialist Feminist and working class international movement to take on capitalism.