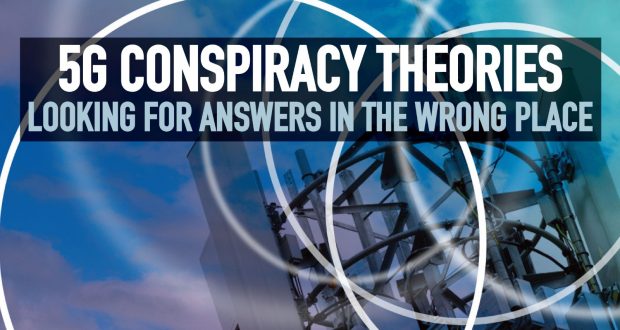 5G conspiracies — looking for answers in the wrong place

A year ago, conspiracy theories about the damage of 5G Wi-Fi emerged but failed to gain significant traction. However, as people struggle to make sense of their lives, which have been turned upside down by the Coronavirus pandemic, these conspiracy theories have grown legs and have resulted in thousands of stories being shared in countless online forums and social media.

These conspiracy theories are false, and dangerous in that they misdirect people’s concerns and energies — away from the very real problems in the world, and those actually responsible for them.

5G is the fifth generation of wireless communications technologies supporting cellular data networks. It will eventually replace or change current 4G Long-Term Evolution (LTE) connections. 5G communications technology was born in parallel with the concept of the “The Internet of Things.” Together they will enable the interconnection of devices and everyday objects in real-time. This technology is set to be the basis for “smart” homes and cities — around which there are significant privacy and data protection issues.

5G was introduced in 2019 and operates on three different spectrum bandwidths — low, medium and high. This will alleviate speed and capacity issues associated with 3G and 4G which operate only on low-spectrum bandwidths (sub-1GHz). 5G has been advertised to provide 1000x times the speed of 4G, but will not provide long range coverage or good wall penetration due to the high-frequency characteristics. Therefore, large numbers of masts will need to be built to provide clear 5G reception. With the roll out of 5G internet this year, 5G masts are being erected throughout cities and although ​they are not colossal structures, they are imposing enough to draw the attention of local people​.

The general scientific consensus is that 5G internet is safe. As with all wireless communication systems, 5G will operate using electromagnetic waves. The main biological effect of the electromagnetic radiation from mobile phones is a rise in temperature. There are concerns that there may be links between long-term exposure and cancer, with some evidence from epidemiological and animal studies, but these remain controversial and are heavily disputed. As discussed above, 5G mobile technology promises a tenfold increase in data transmission rates by operating on high-spectrum bandwidths. The physiological effects of high-spectrum electromagnetic radiation have not been extensively studied. This has triggered a major international review of relevant radiation safety guidelines, for which it is agreed that there is insufficient data. It is worthy of note that in 2011 the WHO/International Agency for Research on Cancer (IARC) listed electromagnetic radiation associated with wireless phone use as “possibly carcinogenic” to humans.

The lack of data and loose language used around the safety of high spectrum electromagnetic radiation need to be addressed urgently, if only to prove that it is indeed safe. An international appeal to the European Union from 180 scientists representing 35 countries expressed their concerns and rightly demanded that the potential hazards of 5G internet on human health be fully investigated. However, the International Commission on Non‐Ionizing Radiation Protection, which sets guidelines on the output of mobile masts, were adamant that there is no substantiated adverse health effect attributed to a normal 5G installation. They produced a new set of guidelines for 5G frequency, limiting usage between 100 kHz – 300 GHz. Genuine concerns within the scientific community about 5G must be distinguished from conspiracy theories, which in essence are based on falsehoods and go against the scientific method of acquiring knowledge.

5G has continually been subject to conspiracy theories, specifically relating to its harm on human health and the environment. For example, it was linked to the death of hundreds of birds in the Netherlands, which was later classified as a hoax. A more popular conspiracy theory suggests that 5G suppresses the immune system. This conspiracy theory has been spread widely on social media, mainly on anti-5G Facebook pages typically run by anti-vaccine campaigners. Around this narrative, there are a few conspiracy theories which relate 5G and the Coronavirus.

One theory brands 5G as the source of the Coronavirus. This story emerged on Facebook in January and identifies a woman using her 5G mobile phone behind barbed wire at an entrance of a residential compound in Wuhan, the epicentre of the Coronavirus outbreak, as the source of the pandemic. They believe that during the lockdown in China, more people were using 5G internet, which exacerbated sickness and illness experienced. This is clearly ridiculous and again has no scientific basis. The introduction of 5G in Wuhan was in August 2019, almost 18 months after England launched its first London testbed for the technology. Iran, meanwhile, has seen an incredibly high number of coronavirus cases despite little 5G coverage. The conspiracy theorists believe that nations are in a race to harness 5G technology in order to become technology leaders of the world, in which human health is of no importance.

Another conspiracy theory claims that 5G causes COVID-19. They believe 5G masts are being used to release Coronavirus in order to depopulate. The leaders of the New World Order, of which Bill Gates is the originator, are orchestrating the operation. They link Gate’s Windows Microsoft, which they claim was made purposely susceptible to viruses in order to sell anti-virus software and now he is spearheading a depopulation campaign to sell a vaccine. Another conspiracy theory believes that the Coronavirus is a distraction and the media and government are accomplices in trying to discredit anti-5G campaigners.

As the coronavirus pandemic continues, people are desperately trying to make sense of their lives being turned upside-down. Much of the world has closed for business and many people are having to self-isolate because of a virus which is killing people by the tens of thousands. It is understandable that people are extremely vulnerable to misinformation and susceptible to believing fake news and certain conspiracy theories as a way to explain things. In this context, it is no wonder that Coronavirus / 5G conspiracy theories have spread like wildfire. An analysis by the New York Times​ found 487 Facebook communities, 84 Instagram accounts, 52 Twitter accounts, and dozens of other posts and videos pushing the conspiracy.

The Facebook communities are used to share pictures of apparently burnt-out mobile phone equipment and push anti-vaccine material. This has culminated in the death of a man who self-prescribed chloroquine, which was touted online and promoted by Trump as a miracle cure for COVID-19. On Instagram, a network of 40 accounts nearly doubled its audience to 58,800 followers. Youtube has also been used to share conspiracy videos, which have been viewed over 5.8 million times. Misinformed celebrities and online influencers, some of whom later retracted their support, have spread these conspiracy theories even further to their millions of followers. The conspiracy can now be found on Facebook in over 30 countries, including Switzerland, Uruguay and Japan.

The conspiracy theories have spread most rapidly on WhatsApp neighbourhood groups, which ironically were set up to support and provide information to communities during the pandemic. These communities are seeing more people suffer and die from COVID-19 as each day goes by, and so the conspiracy theories gain traction. As confusion and sadness turn to anger, the 5G masts have become a target for some. Across Britain, there have been more than 30 acts of arson and vandalism and another 80 incidents involving telecom technicians being harassed on the job.

As social media interest in the topic grew, news media saw the potential to whip up a further frenzy for their own benefit. They saw an opportunity to exploit the desperation of people to sell their news by fuelling these baseless conspiracy theories. ​The Daily Star ​published an article on 24 March titled “Coronavirus: Fears 5G wifi networks could be acting as ‘accelerator’ for disease.” The story, labelled as an exclusive, relied entirely on quotes from non-scientists.

In the UK, four of the biggest network providers, EE, O2, Three, and Vodafone, released a statement together appealing to people not to damage their masts or abuse their engineers. They requested a clampdown of social media platforms being used to spread 5G conspiracy theories. The UK government answered this request and worked with social media giants Facebook and YouTube to take down any information relating to the conspiracy theory. ​It should be said, however, that none of these government or corporate institutions is trustworthy when it comes to information or health. We should be wary of a precedent being set to crack down on views they disapprove of, including anti-corporate or anti-capitalist political views.

Meanwhile there has yet to be any consequences for news media outlets which spread these conspiracy theories. They knew these conspiracies were baseless and yet they spread them anyway. Why? Because of their greed for profit. The news media are privately-owned, profit-making corporations and they will print whatever can make sales. This does not stop at promoting lies and conspiracy theories — they regularly withhold and suppress truths to suit the capitalist system for which they are ultimately propaganda tools.

The problem is the system

As the world races to find answers and solutions to the pandemic caused by the coronavirus, the news media capitalised on the back of this desperate search without any remorse and people’s desperation has allowed baseless conspiracy theories to thrive. But conspiracy theories do not provide truthful answers. The real culprit and danger to people’s health and well-being is the reckless, profit-driven capitalist system itself. The global food industry created the petri dish of vulnerable animal and human populations in which this virus first arose; neo-liberal policies over decades have left our health systems massively underfunded and overwhelmed; most governments have delayed necessary action because their first concern is not public health but profits for businesses.

It’s true that this is a system that serves the interests of a tiny elite at the expense of the vast majority, but it’s not one that this elite are in total control of. The catastrophe that is the Covid-19 pandemic and the economic crash that’s currently taking place, is an example of the system being out of control — but it is operating on the basis of its own internal laws and logic. In the same way it is killing the planet, not because of any devious plot by a group of capitalists, but because the system is driven by short-term profit-making above all else, and as is becoming clearer by the day, that kind of system is a threat to life on the planet. Ending this system and replacing it with a democratic socialist society, where its wealth and resources are publicly owned and democratically controlled by the working class, is where our focus should be.