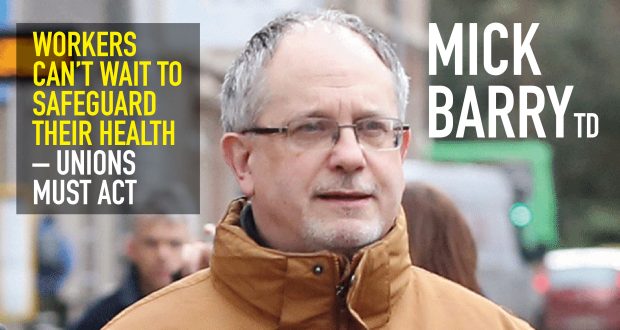 On Weds 25 March 1,000 workers at Moy Park Portadown walked off the job demanding proper health and safety protections for the workforce.

The same day nearly 100 workers at a Larry Goodman meat plant – ABP in Lurgan – did the same thing for the same reason.

In each case the result was improvements in health and safety for the workforce. All workers were members of the UNITE trade union.

Workers should decide what is essential

Here in the South, construction workers achieved a result when the Taoiseach finally closed sites on the night of Friday, March 27. This followed a strong campaign by the UNITE Construction Branch which used social media and photographic evidence to prove how social distancing is nearly impossible in building sites. This campaign had a powerful effect on the consciousness of the general public.

It would have to be said, however, that these examples have put the response of most of the rest of the trade union leadership to shame. Thousands of workers continue to be called in to work in companies that are officially categorized as “essential” but are seen by workers as “non-essential”.

In Waterford, Bausch and Lomb continue production with a workforce of 1,500, presumably categorized as “essential” on grounds of medical manufacture. What essential health service products do Bausch and Lomb produce? Contact lenses. A vital service no doubt but hardly so urgent that production could not be temporarily ceased. Bausch and Lomb like many other such workplaces is unionized.

But the role of the SIPTU leadership was clearly seen in construction, where just days before workers’ pressure and the UNITE campaign forced the closure of sites, they issued a joint statement with the Construction Industry Federation (CIF) in support of keeping the sites open.

FORSA sent out a message to its membership advising them to “attend work if in doubt”.

The tragedy of this situation is twofold.

Most importantly it directly contributes to leaving many workers in non-essential workplaces unnecessarily in the danger zone. But on another level it represents a real missed opportunity for the trade union movement.

A strong campaign at this time for a workers’ shutdown on full pay in non-essential industry would have the potential to bring big numbers of workers (including young workers and women workers in precarious jobs) into the unions.

Workers cannot wait on the unions to take action here. If workers decide that their workplaces are non-essential they should organise among themselves to take steps to shut the job down.

The Facebook group Workers Speskout Covid19 and Socialist Party public reps will be prepared to advise any worker in such a situation. The unions must support such action where it happens and insist that the shutdown happens without loss in pay.