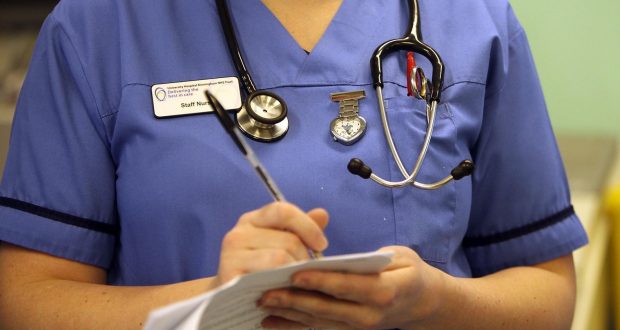 Health workers are on the front line in tackling the Covid-19 crisis and undoubtedly displaying huge dedication and self-sacrifice in doing so. However they are fighting this battle in the context of a health system which was already in chronic crisis, due to decades of underfunding from both Stormont and Westminster, leaving services overstretched and understaffed.  This was a key issue health workers raised during their momentous strikes and industrial action late last year.

The number of people waiting more than 12 hours to be seen quadrupled at some A&E units last year, while one in six of the population are currently waiting for a hospital appointment. The NHS will, of course, be put on a war footing to focus on the pandemic, but there is a major question of capacity. Currently, there are only 100 intensive care beds in Northern Ireland, lower per capita than in Italy, where the health service was overwhelmed by the scale of hospitalisation. Given the Tories’ limited strategy for containment, which Public Health England estimated could lead to 8 million people needing to be hospitalised, there is serious cause for concern.

There is already evidence that the safety of NHS staff, and therefore of patients and the public, is being placed at risk. A member of the NI Ambulance Service was asked to come into work just days after being told to self-isolate after exposure to a patient with Covid-19, while reports from Britain suggest paramedics are being asked to work without adequate masks, gloves and sanitiser. Meanwhile, some nurses were initially told there was no need to use personal protective equipment (PPE) unless they were in contact with a symptomatic patient, in order to conserve supplies, although this was overturned on the insistence of staff.

Many nursing staff are concerned that communication from management is very inconsistent, emphasis and priorities changing depending on who you talk to. There is a sense any local strategic plan is being made on the hoof, reflecting the discordant and confused message from the Tory government.

They bailed out bosses, now bail out our NHS

All resources necessary – whether staffing, medicines or sanitary supplies – must be made available. The idea that the money can’t be found has been blown out of the water by the Tories’ multi-billion pound rescue package for business. If it can be found to bail out the bosses, it can be found for our NHS in this time of crisis, and should be maintained thereafter to meet need and overcome the existing strains in our health service. All aspects of the health service should be brought together in a coordinated plan of action, based on genuinely independent medical advice and with democratic input from health workers.

The evidence from overseas is that mass testing is key to getting ahead of the spread of the virus and more effectively focussing treatment and containment measures, as in the case of South Korea. The message from the World Health Organisation is ‘Test, test, test’. Until now, only those hospitalised with severe symptoms have been tested, and Health Minister Robin Swann aims only to increase capacity to 800 per day. Yet locally based firm Randox has the capacity to produce a large number of test kits and is exporting all over the world. Randox should be brought into public control and used to produce kits on a not-for-profit basis to facilitate mass testing, both here and abroad.

The Tory government is currently seeking to rent 8,000 private hospital beds at a cost of £2.4 million per day! Parasitic firms like billionaire Richard Branson’s Virgin Care have already made a killing from the outsourcing of our health services. Private hospitals should be nationalised immediately – as has happened in Spain – with compensation paid only on the basis of proven need.

Similarly, there is a major shortage of ventilators, which will be key to saving lives in the midst of this crisis. The Tories are asking private firms to turn to producing them. There should be no asking involved when human life is at risk. Any manufacturing capacity which can be turned to producing ventilators and other vital equipment and supplied should be brought under public control and turned towards it now, something their workforces would undoubtedly be delighted to do.

Full rights for all health staff

All staff assisting with this crisis must be directly employed by the NHS with full rights in terms of pay and conditions. Medical students and retired health staff are rightly being given the opportunity to assist. It is essential that they are given appropriate training, supervision and support to protect them, their colleagues and patients. The trade union movement has a vital role to play in overseeing and, where necessary, taking action to improve the handling of this pandemic, in the interests of health staff, patients and the general public.

This pandemic underlines the need for all aspects of healthcare – not just provision, but production of medicines and equipment, as well as research and development – to be fully in public hands, democratically planned and funded to meet need. Private Harley Street clinics are selling testing kits for £370 each while most people are denied access. Pharmaceutical giants dropped research on coronavirus vaccines when the threat of SARS subsided because there was no prospect of profit in the short-term. Now, individual pharmaceutical giants are racing against each other to produce an effective vaccine and make a fortune, rather than the talents of all their staff being pooled to save lives as quickly as possible.

The never-ending drive for profit under capitalism has worsened this crisis and inhibited response to it. This system literally puts profit ahead of human life. We need a struggle for a socialist future, where society’s wealth and resources are used in a planned and democratic way to provide for people’s needs, not private greed.