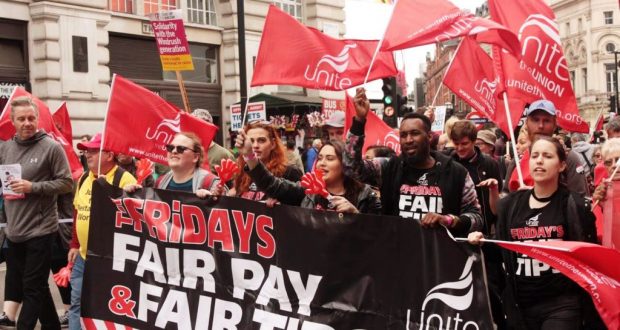 In the midst of the Covid-19 crisis, the announcement by employers in the hospitality sector of thousands of lay-offs has thrown the futures of these workers into uncertainty. Largely low-paid & on zero hour contracts, many hospitality workers now, without employment, are facing a struggle to pay rent and bills in the immediate future. While Johnson and Co. have announced measures to prop up business, these workers have been thrown under the bus by callous bosses and politicians.

One of the worst offenders was the managing director of Beannchor, Bill Wolsley. In a press statement in relation to 800 lay-offs, he said that it was an “emotional and extremely tough decision but if we do not act now, we will not have a business to return to”. Beanchorr posted profits of 11.2 million in 2017/2018 and the industry as a whole boasted of bumper growth in the last year, including a record-breaking Valentine’s Day. Companies like Beannchor and Boojum – which engaged in a cynical PR stunt while it was laying off workers – are multi-million pound enterprises with the money to sustain their staff for months on full pay. The motivations behind the lay-offs was simple – protecting profits ahead of the livelihoods of working people.

Hospitality workers left out to dry

The Johnson government has nailed its colours to the mast – rushing to alleviate the concerns of business, enacting measures such as rates holidays, grants and government-backed loans. The Northern Ireland Executive has received £740 million to provide support for businesses, with a three-month rates holiday and cash grants. Yet where is the bailout for workers? Thousands of workers are now left without an income, with serious concerns over their ability to meet basic bills such as rent, electricity and childcare. In other European countries, government support for business has been linked to obligations to keep staff on the books and pay them.

We can’t take any more!

Hospitality workers have already taken action on Saint Patrick’s Day, calling for the closure of bars with no loss of pay in the interests of public health. Many employers demonstrated a complete disregard for the safety of their staff and customers by promoting events and effectively ignoring social distancing advice. Some employers have actually requested that their employees come in as “volunteers” to keep the business alive, not getting paid but putting their own health at risk!

Despite the scale of the lay-offs, there has been little leadership from the trade union movement in defending workers’ rights. The hospitality sector is, on the whole, unorganised and precarious working conditions dominate. The scale of job losses has, in the first instance, dealt a stunning blow, but this will not last.

Ban lay-offs! No job losses, no cut to income!

With the possibility of thousands more lay-offs by the end of the week, action must be taken now. There is a growing anger that should be aimed against the bosses and the politicians. While mass protests, occupations and strikes may be difficult in the context of “social distancing” to contain the spread of Covid-19, the trade union movement must expose the callous actions of profit-hungry bosses and demand action from the politicians to secure jobs and incomes.

Non-essential workplaces should be closed down, but an immediate moratorium on lay-offs and sackings should be implemented, with workers guaranteed their normal income. Where small businesses demonstrably cannot afford this, the state should subsidise workers’ pay through an emergency tax on the super-rich and big business. No profitable firm which implements, or refuses to reverse, mass lay-offs should receive public support. Instead, they should be brought into public ownership to save jobs and allow their properties and assets to be used to assist in dealing with this public health crisis.