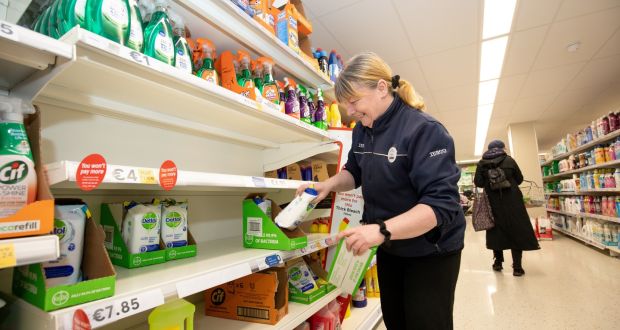 Like with governments the world over there has been a reluctant and tardy response in Ireland by the authorities to the Coronavirus pandemic. Thousands of workers, especially in the private sector, are being effectively told to pay the price for the interruption of commerce.

The need for the isolation of both those ill from Coronavirus and those potentially exposed to it brought into sharp focus the absence of mandatory occupational sick pay in this state and also the time lapse of six days before which somebody may claim illness benefit.

The government, in the face of demands from a number of quarters, including from Socialist Party and Solidarity public representatives, had no alternative but to announce the waiving of the six-day wait period. The availability of an enhanced payment of €305 (instead of the normal €203) for up to two weeks was a minimalist response and was clearly demonstrated to be inadequate by subsequent events.

The announcement made last Thursday of the closure of educational and cultural institutions and the recommended avoidance of indoor gatherings of a hundred plus has directly and indirectly impacted upon thousands of private sector workers. They are being told  that the normal rate of Jobseekers’ Benefit is the only option.

English Language School teachers, private sector childcare workers, private contract cleaners and caterers who work in public institutions in the last few days have effectively been put on protective notice, short time or “temporary” lay-offs. They have been told to apply for the normal rate of Jobseekers’ Benefit or to use up annual leave entitlements.

Similarly, where childcare facilities have been closed parents, especially lone parents, in otherwise unaffected occupations are left with no alternative but to withdraw from their jobs if they cannot work remotely from home. The rapid cancellation of conferences, concerts and other such events has led to a spate of lay-offs in the hospitality sector.

Need to step up

The trade union movement at leadership level needs to step up on protecting jobs, incomes and worker health and safety. Simply repeating government and HSE advice is not enough. Workers and the working class have distinct interests in this crisis and it is not the instinct of this government, its likely Fianna Fáil/Fine Gael successor or the employer organisations to prioritise these interests ahead of those of private profit.

Vast resources and wealth in society are being hoarded by the capitalist class. A claim needs to be made on these resources to protect jobs and incomes and to ensure worker health & safety. For example, the Apple Tax of €14.3 billion must be immediately seized and used as a fund for our health service and to ensure workers’ income is compensated where small businesses are unable to do so.

All attempts by employers to lay off or reduce hours should be queried by an opening of the books for full transparency on their financial situation. Cases have been brought to the Socialist Party’s attention of childcare projects still receiving state funds or seeking ongoing payments from parents while at the same time laying off staff. Such lay-offs should be reversed immediately.

There needs to be an integrated scheme to protect net incomes through a combination of measures including enhanced welfare payments, taxing the profits of the capitalist class for top-ups and a moratorium on outgoings such as utility bills and mortgage/rent payments.

Workers should not be forced to go into jobs where they believe that there is a threat to their health and safety. At minimum a mass testing programme for COVID-19, like that which exists in South Korea, should be introduced.

Where private sector employers are harassing employees, as has been the case in some instances including in hotels and fast food, to work in unsafe conditions, there must be severe sanctions on those bosses and protection of workers from victimisation. Parents who have to withdraw from work because of childminding must be facilitated to do so without loss of income. Major job-shedding companies that are found to be profitable should be brought into democratic public ownership.

The Dáil is due to meet next Thursday in part to legislate for the inadequate welfare measures already announced by the government. Socialist Party member and Solidarity TD Mick Barry will raise the comprehensive measures needed to protect workers’ rights, incomes and safety.

However, what happens outside the Dáil is of at least equal if not greater importance. The response of a number of private sector employers to this crisis brings home the need for mandatory trade union recognition. Young workers especially, to whom it may never have occurred to join a union, can see now how necessary it is. Even without mandatory recognition the trade union movement should now go on a mass online recruitment campaign, and when this virus passes, consolidate with a real-world organising drive to defend workers’ and trade union rights.