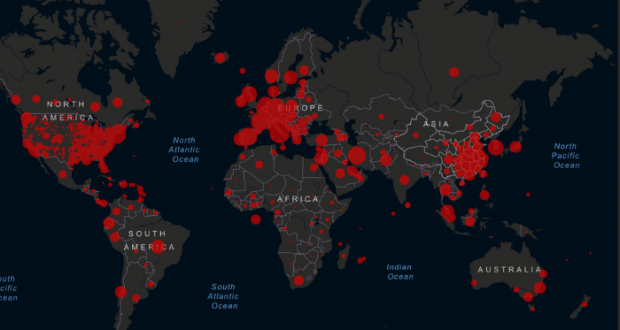 Covid-19: from outbreak to pandemic – a chain of profiteering

How has COVID-19 spread so far and so fast? Catastrophes are not caused by a single event, but rather a chain of events, in this case linked to the type of society we live in where profit is put before the needs of people. The COVID-19 pandemic is no exception. This article follows this chain of events that led to the outbreak in China and the resulting pandemic.

The COVID-19 crisis was not some unexpected and unpredictable event. The world experiences approximately 200 epidemic events per year. Some of these are more dangerous than others and have the potential to become a pandemic. After the Ebola epidemic in 2014 which killed approximately 11,000 people, the World Health Organisation (WHO) developed a plan for urgent research and development (R&D) of diagnostic tests, vaccines and medicine. In this plan, they identified the family of Coronaviruses as a likely cause of another epidemic.

As the Ebola crisis ended, the urgency of this plan dissipated and little was done to put it into practice. The pharmaceutical and private healthcare industries, motivated entirely by private profit, invested R&D into other areas. Capitalist governments, meanwhile, chose to ignore previous outbreaks and the warnings of the scientific community and instead funnelled money into more profitable ventures such as wars and arms sales.

In 2019, world capitalist leaders and others gathered to conduct a simulated response to a hypothetical global health emergency. Their conclusion was that humanity was severely unprepared. Just a few months later COVID-19 would prove these conclusions true. In other words, the powers-that-be understood the potential for this to happen, which makes the under-preparedness of our governments and private sector all the more shameful.

Conditions in the global food industry

As we have outlined before, conditions in the food industry created the petri dish for COVID-19 to emerge such as those in Asian Wet Markets. Live and dead animals are often kept in close proximity to each other and to customers due to narrow aisles. These terrible conditions were a direct result of the drive for profit above all else. This also results in the most disgusting and barbaric treatment of animals.

When China announced the COVID-19 outbreak, there was a criminal indifference from capitalist governments in North America and Europe due to ongoing trade wars and geopolitical tension between China and the United States. Instead, Chinese people, including those living in Europe and North America, were victims of racism at a time when they most needed aid and solidarity.

In late January when news spread that COVID-19 had arrived in Europe, a level of suspicion about the origins of the virus existed, not just in online conspiracy theories but in the highest corridors of power, with Trump describing it as a “foreign” or “Chinese” illness. China was blamed for not containing the outbreak and “causing” a pandemic. This led to a relaxed approach to dealing with the pandemic by many countries as right-wing governments felt they could get away with scapegoating instead of taking responsibility for public health.

The rule of profit

Governments balked at spending money on preventing pandemics because of their profit-centred neoliberal ideology, which is hostile to government spending and which believes that “the market” will solve all problems. This is the biggest factor in the making and acceleration of the COVID-19 crisis. This was seen firstly when governments disregarded scientific calls for the implementation of a global health strategy after previous outbreaks. Instead, governments and the private sector opted for spending on quick profit turnover. This is a shameful and scandalous failure, as the expense of a global health strategy does not come close to the cost we will incur due to the COVID-19 outbreak. The World Bank estimates that this could cost more than $3 trillion.

Another example is the delay in government action to protect people against COVID-19. A shutdown of non-essential work and activity is necessary to slow the spread of the virus, protect ordinary people and allow the healthcare service to manage the virus. Despite this, in country after country there have been shocking delays in implementing measures because of the damage these measures would have on the profits of big business.

Over recent decades, countries have been transitioning from public healthcare to a private-based service. We have seen the reduction in staff and facilities along with a rise in cost in the public system, forcing people to opt for private healthcare packages. As the COVID-19 pandemic spreads through the advanced capitalist countries, the consequences of this transition are hitting home as countries fall back on public healthcare systems, which are unable to cope due to many years of cutbacks.

In the months and weeks since the outbreak, scientists have been working tirelessly to end this crisis. They have sequenced COVID-19’s genome and begun to create vaccines in the hope of making people immune to it. Currently, there are over six different efforts going on to make a vaccine. It is reported that $2 billion is needed to support the development of a successful vaccine against COVID-19. As the search continues, there is also a need for an antiviral drug to treat patients that currently have an infection.

This drug would prevent people from dying from COVID-19. Drugs such as HIV-fighting antivirals and antimalarials are currently being tested.
Developing and producing vaccines and treatments is too important to leave in the hands of the private sector. Commercial competition leads to the hard work of scientists being duplicated in different companies. Profiteering leads to a rip-off of patients and healthcare systems.

Steps to prevent another pandemic

Even after the COVID-19 pandemic, the probability of future outbreaks is high. We need immediate action to prevent these outbreaks from turning into epidemics and then pandemics. This should include:

The biggest lesson we can learn from the COVID-19 pandemic is the value of workers in making our society run, to which big business and bankers do not compare favourably – to put it mildly. We need to unite all sections of the working class globally to end the rule of a capitalist system that offers us a world of unending misery and crisis.