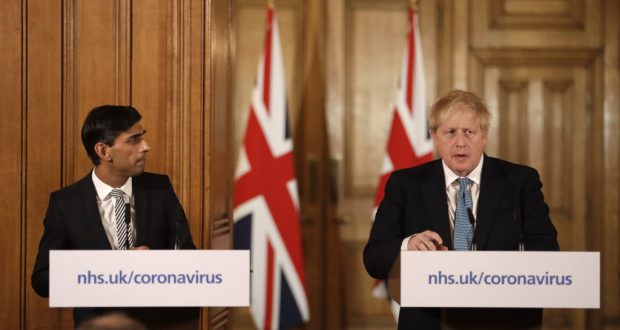 “Now is not the time for ideology” – this has been the refrain from the Tory government, echoed by Arlene Foster, as the state has been forced to intervene into the economy in a way not seen since the Second World War due to the Covid-19 pandemic. What they mean is that their ideology of unregulated and profit-driven markets has flatly failed in the face of this challenge.

Faced with a crisis which would cause a collapse in large sections of the economy, and fearful of its social and political impact, the Tories have been forced to guarantee 80% of wages for workers furloughed during the Covid-19 pandemic. For socialists, our starting point is that working people should not pay the price for this crisis, which is not of our making and has been exacerbated by the inaction of capitalist governments – with the Tories and their ‘herd immunity strategy’ a particular case in point – and by the profit-driven approach of big business.

Most workers will understandably be relieved by the partial guarantee of wages. However, it does not go far enough, and the burden is being placed on the wrong shoulders. There is a real danger that, in the aftermath of this pandemic, the Tories will try to make workers pay the price for this bail out through even more savage austerity and attacks on pay and conditions.

Firstly, workers should be guaranteed 100% of their income. Secondly, wages should continue to be paid by employers from their reserves. Only where small business demonstrably cannot afford this should the state subsidise wages, and this should be funded through emergency taxation on the billionaires and big business.

Thousands of workers in industries like hospitality were laid off before the guarantee was announced, and some companies – like the Hastings Group – have even threatened lay-offs since. There should be an enforced moratorium on all lay-offs and sackings, except for gross misconduct, and mandatory re-hiring of those already laid off. Any firm which refuses should be brought into public ownership and its resources used to help tackle the crisis.

We are used to the refrain that “there is no alternative” to the market, that “there is no money” for public services, that nationalisation is unworkable and that mass job losses simply have to be accepted. All these supposed truths have now been completely undermined, with capitalist governments finding huge sums for emergency investment, and nationalisation of key sectors suddenly back on the agenda. It has been demonstrated that austerity, privatisation and the race to the bottom in pay and conditions are political choices in the interests of capitalism, not economic necessities.

Also, workers previously dismissed as “unskilled”, in order to justify paying poverty wages, have clearly been demonstrated to play an essential role in society, in sectors like retail and food production. These lessons should be noted by workers and young people. It is the labour of working people which creates wealth, provides for people’s needs and allows society to function. The demand for a £12 minimum wage, regardless of age, should immediately be taken up energetically by the trade union movement.

Fight for a socialist future!

When this crisis subsides, we must not accept a return to ‘business as usual’. We need to ensure that it is the bosses and billionaires who foot the bill. We need to struggle which aims to reshape society in the interests of the majority, the working class – breaking from the profit-driven capitalist market. This would necessitate bringing society’s wealth and resources into public ownership so they can be used in a planned and democratic way to meet the needs of all, rather than the super-rich elite. That means a struggle for a socialist future, which would allow us to eliminate poverty and also better equip us to deal with future crises, including that posed by climate change.