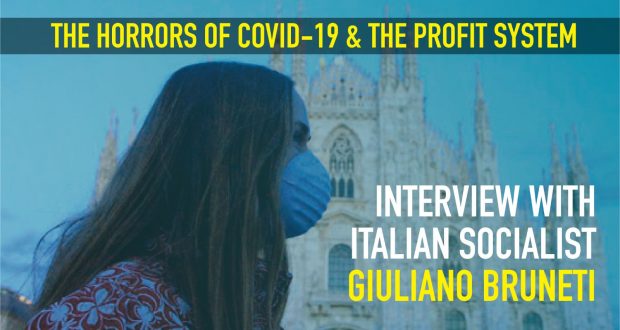 Guiliano Bruneti – member of the Socialist Party’s sister group in Italy, Resistenze Internazionali – spoke in an online meeting last Saturday, organised by Ruth Coppinger, and gave a firsthand account of the spread of Covid19 in Italy. He spoke of the efforts by the boss class to keep production going, particularly in manufacturing, thus jeopardising the health of workers. He subsequently spoke to Michael O’Brien about further developments since last weekend.

“The Italian employers’ organisation Confindustria has maintained its intensive lobbying of the Conte government to water down the decrees made that were supposed to affect a wider shutdown for public health reasons.”

“Besides keeping what would be agreed as essential workplaces open, the government has also permitted what they term industries of ‘strategic interest’ to remain open, by which they mean strategic for the interests of Italian capitalism. The main union confederations shamefully agreed to this. It means that, in reality, we have only a 40% shut down of non-essential industry.”

“So the arms industry is still operating, as is the likes of chemicals, iron and glass-making! In the context of some seven thousand dead and 70,000 diagnosed, with probably up to a million more untested carrying the virus, the bosses are revealing themselves as mass murderers.”

“There are private companies making the swabs for testing, selling them domestically to the wealthy but also exporting them to the US! There is simmering anger in the working class. While whole branches of non-essential production are being permitted to carry on, at the same time there is a draconian regime in place to restrict the movement of people, including the use of drones and geo-location by the authorities to monitor people’s movements and €4,000 fines for those who cannot justify being outside to the authorities.”

“One of the biggest absurdities is that people have to produce a written declaration, if asked, that they do not have the virus, when it is asymptomatic for up to two weeks and people cannot get tested.”

“The mainstream media has played a rotten role. Unlike what we have seen in the US, there is no basis for the right-wing media, a lot of which remains in the ownership of former Prime Minister Berlusconi, to deny the gravity of the situation. So what they do is focus on individual behaviours rather than the big picture of our inadequate public health service or the crimes of the captains of industry. Instead, we get front pages excoriating individuals out walking their dogs or jogging!”

“The pressure on the health service arising from the outbreak has had massive knock-on effects. The number of people receiving treatment for other health issues like heart conditions has halved. People are dying before they even get to hospital. There is a story that has gone viral in Italy of a case in Naples where a man was displaying symptoms and had a 40c temperature, and it took a full day for an ambulance to get to him. His wife was reduced to going out onto the street and lying down on the road in front of passing emergency vehicles to force a response.”

“People being confined to their quarters brings home the poor quality of a lot of accommodation in Italy, where people are cooped up in very small living spaces. There is a massive spike in domestic violence and abuse of drugs, alcohol and prescription medicines.”

“But these examples of social breakdown co-exist with examples of struggle. An earlier wave of rank-and-file industrial action subsided because of a sellout by the union leaders. However, the kowtowing of the government to the bosses last weekend has provoked a fresh wave of strike actions over health and safety that have either already happened or are scheduled to happen, in petrol stations, supermarkets and the metal industry, with the initiative again coming from below from the rank and file of the workers’ movement.”

“The political left has been marginal, with Rifondazione Comunista remaining a ghost of its former self and not making an impression on the national debate. The right is gaining at the moment in the political field, but the main opposition is coming from within the workers’ movement.”

“People are very focussed, understandably, on the immediacy of the crisis, but beyond the virus there will be the same debate as everywhere else about how society and the economy will be reconstructed when the system has been so exposed.”