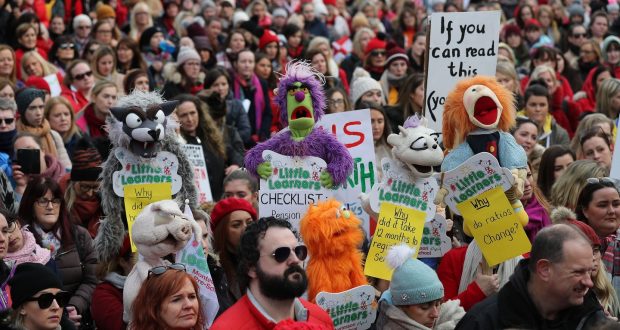 Across the state, workers are being thrown into turmoil by the Coronavirus emergency as companies announce closures and layoffs. For more than 25,000 childcare workers, there is huge uncertainty as all childcare facilities across the state have been closed. This was obviously necessary as a public health measure, and many workers continue to be paid from the state subvention.

However, childcare workers are a generally low-paid and precarious female workforce, despite a system which charges some of the highest fees to parents in Europe. Socialist Party representatives have received many reports from childcare workers who have been forced on to Jobseekers’ Allowance for the duration of the two-week closure. This is in spite of the fact that many of their facilities are still receiving state subventions and/or parents’ fees.

One worker reported: “I work in a large childcare service who is being fully funded during this time by the government… We weren’t even given a second thought, it was, sign on and we’re done. We were given no notice just told that’s it, we are closed as and from 6pm, and off you go and hope the two weeks go well.”

Another said: “All the staff I work with (30 members) were notified that we are laid off until the closure period is lifted. Our employer is unsure of what social welfare payments, if any, we can receive.  Many of the people I work with are not from Ireland and have not been in Ireland long enough to claim any social welfare. Our director will still be in receipt of subvention scheme funding.”

This is a disgraceful way to treat workers – subventions from the state and the profits of childcare companies must be used to guarantee all workers’ wages.

There is also uncertainty because it is possible that childcare facilities will continue to be closed after the end of the two week period. Minister for Children Katherine Zappone must intervene to guarantee that all workers are paid for as long as this crisis continues – by their employers, or in the case of genuine inability to pay, by the state directly.

Before this crisis erupted, childcare workers had already been fighting to change the conditions they face at work. Twenty thousand marched just before the election to demand decent pay and conditions. The current pay and conditions of this mainly-female workforce are outrageous and show the contempt with which they are viewed by the current system, as simply being benign carers rather than workers whose labour should be valued.

The best guarantee for the rights and conditions of childcare workers is a real public childcare service, funded by the state and free at the point of use. This means taking the major and most-profitable childcare companies into democratic public ownership.

This crisis underlines the need for all workers to be represented by a fighting trade union movement, which acts to organise precarious workers and to take on bosses who are trying to shift the burden for this crisis on to workers generally.