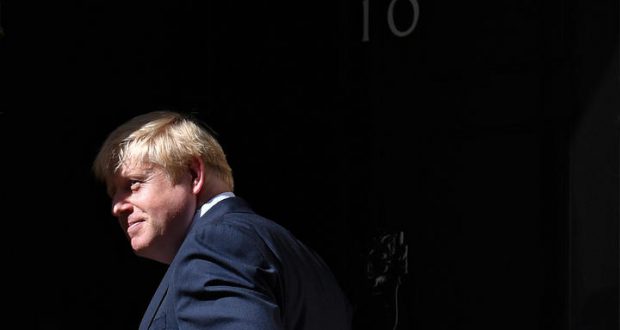 “The real hero of Jaws is the mayor. A gigantic fish is eating all your constituents and he decides to keep the beaches open. OK, in that instance he was actually wrong. But in principle, we need more politicians like the mayor – we are often the only obstacle against all the nonsense which is really a massive conspiracy against the taxpayer”- Boris Johnson, 2006

The above quote gives an insight into the callous and profit-driven psychology which has driven the Tory government’s Covid-19 strategy. Initially, they talked of not following other governments – including in Italy and the Spanish state – in introducing strict social distancing measures. The very limited measures announced by Johnson last Thursday amounted to people staying home for 7 days if they had a new and persistent cough or a high temperature. The government’s plan was described as an attempt to build “herd immunity”, by which individuals would become infected (up to 80% of the population) and recover to become immune, although growing evidence of reinfection elsewhere calls this whole concept into question.

However, the Imperial College suggested this strategy could lead to 250,000 deaths. They also said that, based on measures announced last Thursday, need for critical care beds would exceed the number of such beds eightfold. A Health Select Committee was also told that there are currently 98,000 beds in the NHS, of which only 3,700 are adult critical care beds. But a leaked document from Public Health England suggested 8 million people could need hospital care over the course of this pandemic, with millions potentially requiring critical care.

Work from home, but send your kids to school.. and the pubs can stay open

Westminster was therefore forced into announcing further measures. They have issued social distancing advice to encourage people to avoid any unnecessary contact with others; home isolation of whole households for 14 days if anyone displays symptoms; over 70s should remain at home and avoid any contact with others; home working is encouraged and people should not go to bars or clubs.

Of course, this must go along with a guarantee of income. Today, the government also announced a significant package of support for businesses, including rates holidays, grants and government-backed loans. But where is the bailout for workers? Companies must be obliged to continue to give their staff full pay and, where small businesses demonstrably cannot afford this, the state must step in to subsidise them through emergency taxation on the billionaires and big business.

The government should introduce emergency measures to prevent anyone from being cut off from gas, electricity, phone and internet providers and ensure emergency measures for the provision of home heating oil. Instead of talking about bailouts for private industries, this crisis demonstrates the need for key sectors of the economy to be nationalised and run in the interest of human need, not profit. This would also require democratic control by workers of these sectors.

Take over private hospitals! No profiteering from this crisis!

This is an unprecedented crisis but not one that was unimaginable. The issue in managing the response to this outbreak is a question fundamentally of the capacity of the NHS, which has been savaged by years of austerity, underfunding and privatisations. Now, the government is reported to be negotiating buying or renting beds from private hospitals to be able to use them in this crisis.

Private companies should never have been allowed to compete with the NHS, they should certainly not be making a further profit out of this crisis! All private health care facilities should be immediately nationalised with their staff being brought into the NHS and the facilities used to increase the NHS’s capacity to deal with the Covid-19 pandemic.

Putting human need, our health, safety, wellbeing and even the lives of working-class people ahead of profit is completely contradictory to the Tories approach. However, this health crisis, with its already unfolding massive economic and social implications, demonstrates that the capitalist status-quo is not working. Even the Tories can be forced to introduce measures that last week would have seemed impossible, such as a freeze on rent and mortgage payments, as has been done in Italy, or nationalisation of private health, as in Spain.

This crisis has already begun to illuminate the class divisions and inequalities in our society, and it is far from over. It is essential that we fight to ensure human wellbeing is put before private profit. That requires a struggle for a socialist future, where the wealth created by the labour of working people is used in a planned and democratic way to meet the needs of all.