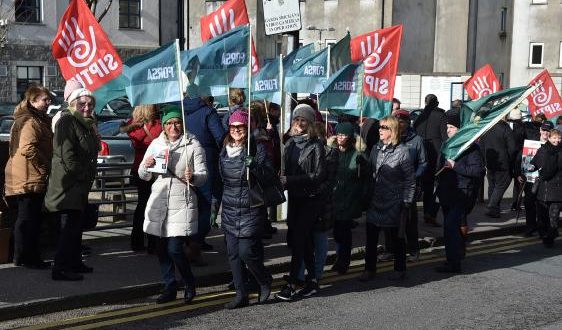 CE Supervisors and Section 39 workers stand out as two of the groups of workers most shabbily treated by the outgoing government. It is therefore timely and correct that a protest is taking place today amidst the discussions about government formation to put it firmly on the political agenda for whoever comes to power.

The absence of a pension scheme for CE Supervisors and not including Section 39 workers in the very partial pay restoration measures obtained by public service workers is rank discrimination.

Whatever government may emerge in the coming weeks or months it is probable that strike action will be required as a further demonstration of seriousness to force pay and pension equality for both sets of workers.

Our representatives including recently re-elected Solidarity TD Mick Barry have been on record of supporting both the cause of Section 39 workers but also previous ballots for industrial action, which had they been followed through, might have forced the issue with the outgoing government.

In addition while the partial pay restoration measures arising from the likes of the Public Service Stability Agreement should be paid to Section 39 workers the PSSA in itself was a poor deal for public service workers not least for not reversing two tier pay. All workers need real pay rises to meet the cost of living crisis and ambitious claims should be lodged by the trade union movement.