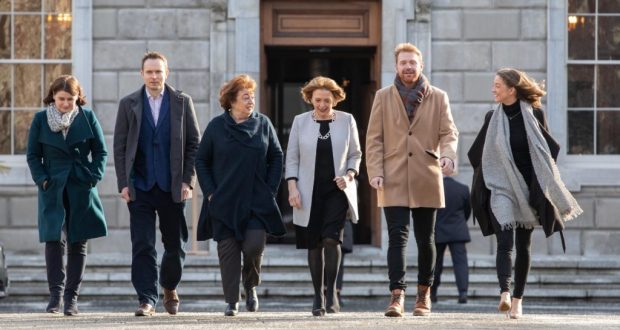 The Social Democrats were one of the forces to benefit from the mood for change on February 8, successfully getting six TDs elected up from two in the outgoing Dáil. Their campaign focused on the need for public housing and action on the health crisis. Their manifesto called for 100,000 public homes on public land in the next five years and a nationwide rent freeze.

Co-leader Roisin Shortall is considered the architect of the ‘Sláintecare’ proposals and the party said the implementation of Sláintecare would be a red line for entering government. ‘Sláintecare’ contains many positive steps forward, though it stops well short of an Irish National Health Service, that is publicly owned and free at the point of use.

Not ruling out coalition

The Social Democrats vote undoubtedly reflects the mood for an end to Fianna Fáil and Fine Gael rule and a genuine alternative. In a 16 Feb poll by RedC, only 19% of SocDem voters wanted an FF/FG government, while 43% wanted “Sinn Féin leading a coalition with a combination of other smaller parties”. It’s not surprising then that the party came in for a storm of criticism on social media on Thursday, when they abstained on all the votes for Taoiseach, including refusing to vote against Leo Varadkar and Micheál Martin.

They have since ruled out the idea of taking part in an Fianna Fáil-Fine Gael stitch up government, reflecting the pressure of their supporters. However, newly elected TD Gary Gannon clarified: “We’ve ruled them out collectively as government partners, we haven’t ruled them out in terms of talking to them individually.”. The reality is that any government involving either party, will not be a government of real change, as those parties would act as a block on any genuinely radical measures. Ruling out coalition with FF and FG should be the starting point for those who claim to stand for a left alternative.

Social Democrat co-leaders Roisin Shortall and Catherine Murphy certainly have a record of taking stands on individual issues, including Murphy’s exposure of Denis O’Brien. But this doesn’t translate into an opposition to the capitalist system, or a commitment to building a movement that can fundamentally transform society. Roisin Shortall was a minister in Enda Kenny’s government, for example, and while a member of the Labour Party attacked the left as a ‘’ragbag’’. The effect of their approach was exposed, when they voted on Dublin City Council to privatise public land at O’Devaney Gardens, in exchange for a minimal amount of public housing.

Gary Gannon explained: ““We’re dealing with an ideology that is neoliberal, that says if we don’t take this particular deal that we’ve approved well then what’s going to happen to the site is nothing”. Unfortunately, it didn’t seem to occur to the SocDems that a fight could be attempted by housing groups, those on the waiting list or working class people generally to oppose the sell-off and demand public homes on public land. Instead their approach was to take at face value the options they were offered, and choose the ‘’lesser evil’’.

This sums up the limits of being a ‘’Social Democrat” and why we need an anti-capitalist and socialist perspective. If you stand only for reforms to the existing system, you will limit yourself to what that system deems to be ‘’practical’’.

But capitalism in Ireland today means continued profiteering by landlords and developers, underfunding of public services, rising inequality and precarity and a continued lack of serious climate action. Instead we need an active struggle by working class and young people on all the issues and to fight for a left government with socialist policies and breaks with the rule of capitalism.