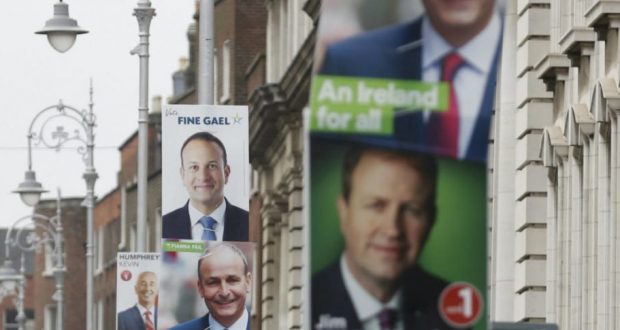 On 8 February, people cast their votes and produced an historic election result, the ripples from which will continue for some time, writes Kevin McLoughlin.

The two traditional capitalist parties were left reeling at the temerity of voters to only give them a combined vote of 43.4%. Insult was added to injury when it emerged they came only second and third in the popular vote behind Sinn Féin.

Both the results for Fianna Fáil and Fine Gael, and then the vote for Sinn Féin were unprecedented. They reflected in part an altered approach by Sinn Féin in the election. In the 2016 election, the latter pronounced loudly and often that they would respect the EU’s Fiscal Rules and cautioned people not to expect too much from them, hoping business heads would understand they didn’t need to fear Sinn Féin in government. This time, following terrible election results last May, they tacked left and made election promises as to what they would do when in power.

However, the main factor in this result was the emergence during the campaign of a desperate desire for real change from working class people themselves. They sought a vehicle to express that desire and Sinn Féin was best positioned to be taken up and used to strike the blow against the rule of Fianna Fáil and Fine Gael. The main change from May last year was the mood of the mass of people.

As each opinion poll further indicated the potential for the two traditional parties to be pushed into minority status, so too people shifted to Sinn Féin as the means to make it so. Of course the result itself, but also the petulant responses of Fianna Fáil and Fine Gael to it, has created more enthusiasm and hopes in Sinn Féin on a widespread basis.

No party has an overall majority and now confusion and speculation reign as to what may happen next, including whether a government that represents real change can be formed. But achieving real change isn’t just a question of how many TDs you have, it’s about what policies the parties and TDs stand for.

For example shifting the current minimum wage from €10.10 to a living wage of €12.35 is a definite positive change, but it wouldn’t transform or resolve the serious cost of living issues facing people. More root and branch change is necessary and an understanding of what actually drove the election result.

The main issues were the housing and health crisis, yet there wasn’t a major discussion on the details of policy on these. That’s because people had drawn the deeper political conclusion that the problem wasn’t about details but with the whole overall approach and priorities about how society is run, and that it couldn’t be altered unless you got rid of Fianna Fáil and Fine Gael.

There was 5% to 6% growth in Gross Domestic Product (GDP) last year but because the economy is rigged for business interests, this made little difference to the majority as inequality grew. All this shows that to achieve real change you need a radical and fundamental shift in direction of an economy based on people’s needs not one geared towards private profit. People innately have a sense of that.

However, Fianna Fail have 38 TDs and Fine Gael 35, 73 out of 160. This means they neither have the numbers to form a government on their own, nor can they themselves vote to bring down a government that might be established.

This has led to an amount of speculation and discussion that a minority left government or a government that wasn’t left, but which didn’t include Fianna Fáil or Fine Gael could be established and could last for a period of time.

The Socialist Party and Solidarity have been clear from day one:*if there is a proposal in the Dáil to try to establish a minority alternative government, that is one that doesn’t include Fianna Fail or Fine Gael, we will vote to allow such a government come to power (unless of course it contained some specific proposal that was detrimental to the interests or unity of working class people on this island- read our article on border poll and Sinn Féin here https://socialistparty.ie/2020/02/towards-united-ireland/). We would do this even though such a government wouldn’t stand for the the kind of socialist policies that are necessary to deliver real change for the majority, in order to respect the progressive desire of people to keep Fianna Fáil and Fine Gael out.

Some of those who are pushing to form such a government are parties and people we work and cooperate with, such as People Before Profit, RISE and TDs from the former Independents4Change. They are pursuing Sinn Féin, the Social Democrats and the Greens to get involved with this.

We would vote in the Dáil to allow such a minority government to come to power. Then basing ourselves on the needs of ordinary working class people, we would also immediately try to mobilise the “people power” of the working class to demand such a new government deliver on key demands on issues such as the housing and health crises, pensions and climate change, to name just a few. If such a government proposed any measures against the interests of the working class or served to in any way reinforce the capitalist grip on the economy and people’s lives, we would oppose it.

It is technically possible that such a mix of different parties with different policies could come together and for the TDs who oppose them – a majority in the Dáil – to be pressured into abstaining in a vote to allow them come to power.

Hanging on a thread

However, such an administration would hang on a thread. The media and the big business establishment would immediately try to undermine it. Any reforms it implements would likely be counteracted with anti-working class measures and economic sabotage from the capitalist establishment, who would undoubtedly organise to bring it down at a time most advantageous to themselves and their main representatives, Fianna Fáil and Fine Gael.

So, while the desire for change is completely understandable, it is also necessary to know who and what you are taking on and prepare for what they will do. In fact the capitalist establishment would move to try to cut across even the formation of a politically limited minority government. Why would they let it get established? They would pressurise the majority that exists in the Dáil to maintain the status quo and vote against such a proposal in the first place.

Add to the votes that Fianna Fáil and Fine Gael have, the votes of six Labour TDs, and the vast bulk of the 22 Independents elected and possibly others, and it’s not difficult to see how they could organise a majority of TDs to impose a block.

We will vote in favour of a minority alternative government if we get the opportunity, but it is also vital we understand the limitations in this approach. At best it will not result in a government of fundamental change, as some of those who might be involved have stated they accept the capitalist system – the Greens and Sinn Fein – while others oppose it. But most importantly, the numbers and forces are there to cut across it at this stage. Unfortunately, the most likely outcome of the current political situation is a government that involves either or both Fianna Fáil and Fine Gael and other parties, possibly including the Social Democrats, the Greens and Independents.

Prepare for a left government

So we now need to begin preparing for if we are blocked in the Dáil. We need to build on the desire for real change demonstrated in the election by mobilising a new mass working class movement as has happened in France over the last year, or with the water charges and Repeal movements of the last years.

Specifically if Fianna Fáil and or Fine Gael are brought back into power, the parties that stand or claim to stand for real change, those on the left, Sinn Féin and indeed the Greens who were elevated by voters, must act.

We believe the following steps are necessary now:

In such a debate, the Socialist Party will try win support for socialist policies and socialist change and the need for the trade unions to be reclaimed as fighting organisations, as well as the need for a new mass political movement to specifically represent the interests of the working class and to fight for a socialist solution to the crisis of capitalism. But the outline is there as to how a powerful new mass movement could be built.

The desire for change shown in the election could be a basis for the emergence of struggle which would undermine any right-wing government that may come to power, and in so doing create the potential to build and mobilise for a majority left government. Such a government would be really committed to socialist change, where the wealth and resources of society are publicly owned and planned in our interests, and those of our planet.