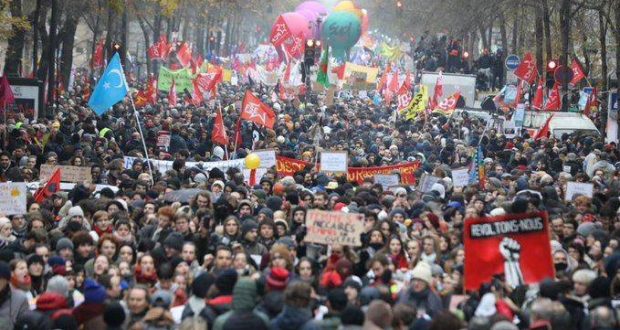 Strikes have been gripping France for over a month now in opposition to attempts by the Macron government to attack workers’ pension rights.

Railway workers led the strikes, starting in early December, which then broadened out to bring in teachers, lawyers, healthcare workers, airline staff and even dancers at the Paris Opera house. The protests on 5 December saw 1.5 million on the streets followed by 885,000 the following week.

The strikes in December have seen ports at a standstill and public transport in whole chunks of the country grind to a halt. Where trains and buses did run, they did so on an extremely limited service, at an estimated cost of €600m. Oil refineries were closed due to strikes, with organised blockades at all 8 oil refineries in France.

The level of participation of workers and the disruption to the economy is unprecedented in recent times. This strike movement is now the longest running strike action since May 1968 and represents one of the largest and most significant movements of opposition to the Macron presidency.

The movement has popular support, with 54% of the population supporting the strikes at the height of the disruption over the festive period. [1] The government had hoped that the Christmas holidays would cut across the movement and dampen the mood. If anything, indications are that it has strengthened.

On New Year’s Day, the CGT (General Confederation of Labour) general secretary, Phillip Martinez, called for all of France to come out on strike [2] in order to send the strongest signal to the government. This was backed up by the main union federations calling for general assemblies in workplaces, schools, colleges and communities and then for coordinated strike action on 8 and 9 January, and large protests on 11 January.

Indications are that the protests today could be significant (reports to follow).

Macron is attempting to radically restructure the French pensions system, removing many sectoral and local agreements where workers have won improved pension rights and essentially pushing the retirement age up to 67.

As we have seen in many countries, the French government and big business argue that the pension funds are in deficit and therefore need to be reformed – in 2018 the funds had a €3.5bn deficit. However, the argument that there is a lack of resources to fund pensions is a bogus one. Labour productivity has improved in recent decades with the wealth generated per worker massively increasing. Profits are at record highs. There are plenty of resources to ensure all workers have a decent pension and can even retire earlier. The pension reforms are simply an attempt to increase profits for big business on the backs of workers.

The hypocrisy of this deficit argument is exposed by the fact that in France big business benefits from loopholes that allow them to avoid paying employers’ contributions into social insurance funds. In 2019 alone, this amounted to €66 billion, and €9.8 billion not being paid into the health insurance fund for elderly people. This tab has then been picked up with public funds. [3]

At the same time, the French capitalist class are increasing their wealth. France holds the world record for dividends paid out to shareholders, an all-time high at $51 billion last year. [4]

Jean Francois Cirilli, the chair BlackRock, a large private investment firm that manages €24.7bn worth of funds in France, has been nominated by the Prime Minister to be an officer of the ‘legion of honour’ – a provocation to the movement.

It is symbolic of the close links between big business, finance capital and the Macron presidency. It is known that BlackRock has been one of the main lobbyists pushing for these reforms. Macron himself is also a friend of this firm and has hosted the firm’s US-based CEO and founder in the Elysée Palace. [5] This has led to workers occupying the headquarters of BlackRock, highlighting the naked class nature of these pension reforms. [6]

Macron- President of the rich

The BlackRock affair highlights the nature of Macron’s presidency. Macron is rightly seen as a president of the rich and has a long record of attacking workers’ rights and implementing pro-rich policies.

Prior to being President, as a Minister in the Hollande government, he spearheaded anti-worker legislation that attacked many important workers’ rights such as extra pay for Sunday working. Earlier in his presidency he also attacked workers’ rights to redundancy payments and other rights around job security – ramming it through parliament without a vote.

Prior to his career in politics, Macron was an investment banker, who made millions from high-profile mergers and acquisitions, notably in Nestlé’s acquisition of a subsidiary of Pfizer.

He has ruled as a president of the rich – abolishing the wealth tax that hit the richest 1.5% of the population and planning on slashing corporation tax. A key goal of his presidency is to inflict blows to the union movement and workers’ organisations. These pension reforms are very much a part of this.

Macron came to power amidst widespread distrust towards the political establishment. Following years of austerity and corruption scandals, the two traditional political blocs that have ruled France in the interests of big business have become massively discredited. The 2017 elections saw the near wipeout of the Parti Socialiste (affiliated with the Irish Labour Party), and Les Républicains (formerly the UMP) struggled to get into third place.

Macron was seen by many capitalist commentators as a ‘knight in shining armour’ that would reset French politics and would re-establish political stability for the French capitalist class. He was even looked to by the capitalist classes internationally as a certain model.

This was always an overstatement – Macron was not elected on a wave of popular support. The election saw a record number of abstentions and ‘blank votes’ being cast. Approval ratings for Macron have been at historically low levels for French Presidents and currently has a 67% disapproval rating. [7] Macron continued the policies that led to the undermining of the political ‘centre’ and therefore fundamentally undermined himself and his project.

Under Macron’s neoliberal, pro-rich policies poverty in France is increasing. Nearly 9 million people in France are now living in poverty.

A recent survey has found that 59% of people in France worry that they are in a more precarious financial situation than before [8] and that 80% believe that their children’s generation will be more vulnerable to poverty than their own. [9] Shockingly, 21% said they were unable to afford three meals a day and 27% said they could not afford to buy fruit and vegetables on a daily basis. [10]

Anger against this increased impoverishment and blatant inequality is fuelling and pushing this movement. This anger was seen very strongly in the Yellow Vest movement that erupted last year over attempts to increase carbon tax, however it quickly broadened to other issues such as the lack of public transport, cuts to welfare, inequality, lack of democratic rights and low pay.

There is massive anger in French society and a clear willingness to struggle by millions of working-class people. General assemblies have taken place in many workplaces to discuss the strike and to organise actions, as well as in many communities and colleges. It is essential that these continue and are strengthened and broadened out to include more workers.

There are attempts by the government to divide the unions. So far, this does not seem to be working with talks earlier this week between the Prime Minister, bosses and the unions failing to decisively chip away any of the union leaders.

The Yellow Vest movement last year did push the government back and shook Macron’s presidency. Concessions were won, but Macron was able to ride out the storm due to a number of factors, such as the massive state repression, and a lack of a clear strategy and organisation from the Yellow Vests. Lessons need to be learned from this.

The general assemblies must be in full control of the strike and protests. As well as organising the strike, they should also be a forum to draw up a broader set of demands, such as increasing wages and benefits, ending tax loopholes for big business, an end to precarious work, end unemployment through reductions in the working week without loss of pay, and major investment in public services. They should discuss and develop a strategy to achieve their demands and bring down the Macron government.

A struggle for such a programme will not be possible on the basis of the capitalist market, there needs to be a fundamental break with this system. The French working class needs to be organised in a party fighting for a workers government that takes the key sections of the economy out of the hands of big business, the bankers and the super-rich and nationalises them under workers control and management. On this basis it would be possible to democratically plan the resources of the economy to meet the needs of the majority and not for the profits of a few. 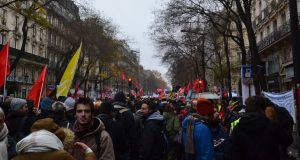