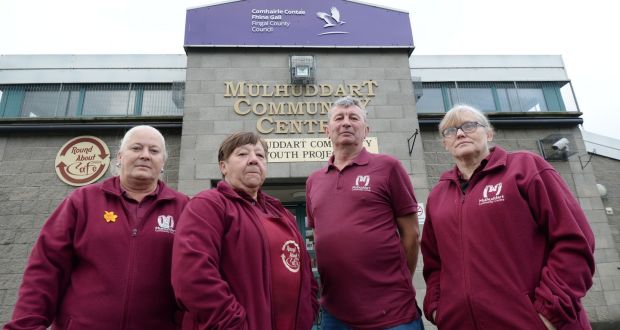 Leo Varadkar likes to talk about people who get up early in the morning, but in his own constituency are the working poor Leo never sees.

Workers at Mulhuddart Community Centre, Dublin 15 (run by Fingal County Council) are paid minimum wage only, with no pay scale or incremental increases to match the cost of living.

The permanent workers ironically earn less than temporary Tús and community employment scheme workers who they work alongside, creating an even worse sense of injustice. With family income supplement and fuel allowances, the difference can be €2-3 per hour. They get no Christmas bonus either — that was taken away in the recession when the government savaged the community sector to bail out the banks.

Pobal, the government agency who fund most community centre staff, doesn’t give the centres enough to fully pay minimum wage — that has to be topped up by the centres themselves, which are stretched already trying to maintain their buildings and services. In the case of Council-run centres, surely it should step in to ensure workers are treated with dignity and fairness?

Nobody can live or raise a family on minimum wage. These workers are caretakers, admin, catering and cleaning workers providing vital services.

In recent months, the workers wrote to their elected representatives. They then spoke to the media and their story was covered in the Irish Times. With assistance from Socialist Party reps, they brought their case for debate to Fingal Council but they were cruelly rebuffed. Council management refusing to take any responsibility, despite funding most of the Centre and having its name over the door.

Solidarity and Socialist Party councillor John Burtchaell then tried to bring the issue for debate before Christmas in order that the workers might get a Christmas bonus. But the Fianna Fáil Chairperson ruled it out and no other parties stepped in to support him after a blazing row.

Following the meeting, a ‘memo’ was given to workers by the community centre board, warning them that talking to the media was a breach of  contract! This was a disgraceful attempt to gag low paid workers — shockingly a local Labour councillor is chairperson of the board and would’ve been a party to this memo.

A social media campaign and petition calling on Fingal Council to top up the wages and to pay the workers their Christmas bonus has been well supported by local people. Regular updates keep the almost 400 who’ve signed the petition informed. This helped bring a change in attitude and local councillors backed a motion supporting the workers on 7 January.

The Socialist Party will continue to support these workers and help them do whatever is necessary to organise the community sector so that poverty pay is challenged once and for all and the government is forced to properly fund vital community services — including by paying workers properly, with trade union rights and conditions.