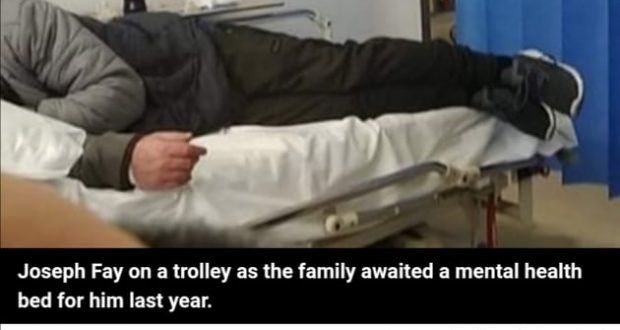 The case concerned Joseph Fay, aged 46, and the interviewee was his sister, Solidarity Councillor and Socialist Party member Sandra Fay. Sandra spoke to The Socialist about the issue:

“Joseph started out as a very bright child, outgoing and really good at school. A childhood trauma, which we only found out about much later, affected him in his teenage years. The cliché is that teenagers “act out” but it is always a case of young people struggling to express themselves.

“The death of a brother close in age to Joseph was a further compounding trauma, after which he became introverted and started displaying the symptoms of psychosis, talking to himself, rocking and extreme behaviours that sometimes posed a danger to himself and others, especially my mother.

“Our experience in the years since his diagnosis can be summed up as being a sticking plaster of medication and a revolving door of institutions (hospitals and prisons) where at this stage Joseph has spent 70% of his life since he was first diagnosed.

“The Mental Health Act under which he gets detained, like the medication, is really about containment of the person and not about putting them on a real path to recovery. Then his addictions are virtually regarded as a separate and unrelated issue when in fact the most advanced and enlightened studies show addiction and mental illness together are rooted in trauma, and effectively an attempt by the person at self medication.

“The legislative framework and the inadequate model of care for people suffering with mental illness and addiction are totally out of date and relate to redundant theories that root the problem in moral failings in the person or their genes: the bogus concept of an “addictive personality” or chemical imbalances. The government continue to ignore “A Vision for Change,” launched in 2006, which embraces a biopsychosocial model which means that mental health problems are a result of complex interactions between biological, psychological and social factors.

“If a cancer patient doesn’t respond favourably to a particular treatment you don’t blame the patient, yet people like Joseph who suffer with mental illness and addictions are blamed and judged for not responding to the types of treatment on offer.

“I made the point in the Journal.ie interview that even referring to the current regime as a “sticking plaster” is an overstatement, in the sense that so under-resourced are mental health services that you cannot even access the sticking plaster of a bed and therefore at least provide the family of people suffering like Joseph with some respite.

“The fact that there were insufficient hospital beds available, meaning that Joseph had to stay in Cloverhill Prison last year, is an example. But more generally we have a pattern of people being in extreme distress to the extent that the Garda are called to take them into the station under the Mental Health Act and call a qualified doctor to come to the station to assess them for referral to hospital. Such is the pressure on the system that doctors feel compelled to set the bar high for referral and rule patients fit for release rather than taking them into care. This has happened in Joseph’s case with the Garda then advising us to take a barring order against him – which would effectively render him homeless.

“The government want to de-politicise the mental illness epidemic in society. Joseph’s path to recovery is not just blocked by a failing and under-resourced system but also by austerity, with the prospects of stable housing and employment impossible. It is well-understood by working class people and it is something we will be putting front and centre in the next general election.”