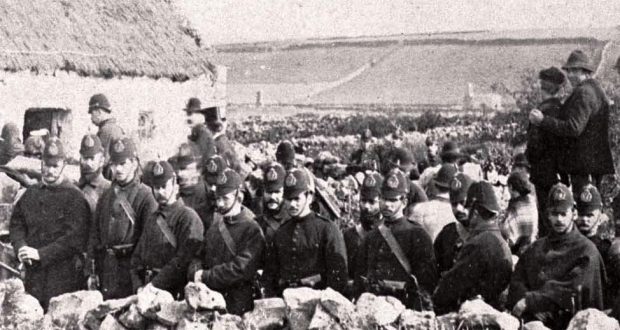 Fine Gael forced to back down from celebrating repressive colonial police

Widespread anger has forced the government to retreat, at least temporarily, from holding a commemoration for the Royal Irish Constabulary (RIC) and Dublin Metropolitan Police (DMP). These two police forces upheld colonial, landlord and capitalist rule in Ireland.

They were a blunt instrument in the hands of the big landlords, carrying out evictions and beating down protests, most notably during the Great Famine (1845-1849) and the Land War (1879-1882) and other struggles over land. The “peelers” were spoken of with fear and hatred by the poor cottiers, landless labourers, urban workers and small farmers.

What provoked particular disgust was that the State planned to honour a force whose “temporary constables”, better known as the Black and Tans, were synonymous with colonial terror in Ireland during the War of Independence. Their horrific atrocities included the sacking of Balbriggan in September 1920 and the burning of Cork City Centre three months later. They fully deserve their reputation as ruthless paramilitaries who killed, tortured and brutalised at will.

A tool of the Irish bosses

The RIC, who were Irish and 75% Catholic, were a weapon in the hands of the Irish capitalist class whose leading figure at the time was William Martin Murphy. Murphy, alongside 404 Dublin bosses, locked out 20,000 largely poor and destitute workers in Dublin in 1913 in an attempt to smash militant trade unionism. Murphy had been an MP for the Irish Parliamentary Party and was a major owner of Dublin’s tramways and newspapers. On Murphy’s request to Dublin Castle (the seat of British Rule in Ireland) the DMP were reinforced by 500 RIC men. The police were the “thin blue line” standing between the locked-out workers and justice; without them, the bosses of Dublin could not possibly have defeated the workers.

On Bloody Sunday (August 30, 1913) the DMP hospitalised 500 strikers and beat a man to death in his bed. On other occasions the streets were bloodstained as drunken police rioted. In this “liberal democracy”, freedom of speech and assembly did not exist for the locked-out workers – thanks to the DMP who attacked meetings and jailed speakers. Alice Brady, a 16-year-old worker, was shot and killed by a scab and the DMP let her murderer walk away. She was one of five strikers killed during the lockout.

At an earlier date, the 1907 dockers’ and carters’ strike in Belfast showed what happened to RIC officers who stepped out of line. The role of the RIC in 1907 was to attack strikers who tried to stop scabs from entering workplaces. Union leader Jim Larkin made a speech highlighting discontent with pay and conditions in the ranks of the RIC, and urged police officers to organise in the same way as the dockers and carters. Constable William Barrett responded to Larkin’s speech by refusing to do the capitalists’ dirty work and 800 out of 1000 other police officers joined him in a mass meeting. They paid a heavy price, with Barrett and six others sacked and hundreds transferred after the army occupied Belfast. This is probably the only episode in the history of the RIC that is worth celebrating, but it’s doubtful that commemorating a police strike is what Fine Gael had in mind.

On 23 April 1918 workers staged a general strike against plans to bring in conscription. This victorious campaign drove a wedge even further between the RIC and the masses. A boycott of the police began; they couldn’t get food, fuel or intelligence from locals. So great was the people’s hostility to the RIC that guerrilla warfare broke out, with attacks on the RIC and the burning of police barracks.

This year we mark the centenary of 1920, when a spectacular general strike combined with colossal protests numbering 40,000 in Dublin centred on a hunger strike in Mountjoy Prison. The openly socialist ITGWU (Transport Union) had grown from 5,000 members in 1916 to 120,000, and the Labour Party won 394 seats in the local elections in that year, making important gains in all major cities on the island. With strikes, red flags and “soviets” multiplying across Ireland, the British ruling class was terrified by a growing movement for social as well as national liberation, and the potential for socialist revolution.

In response to this and to the collapse of RIC membership, 1920 was also the fateful year that the Black and Tans and Auxiliaries were set up. They were simply reinforcements for the RIC; the “Black” in their nickname stood for the police uniform. Around 19% of the Black and Tans and “Auxies” were probably Irish. There’s no clear dividing line between the RIC and the Black and Tans. It was also in 1920 that the Government of Ireland Act partitioned the country in a conscious attempt to divide and rule the working class in Ireland along sectarian lines. Both actions were part of a bid to crush the growing radicalisation in Ireland.

So why does the government want to commemorate the RIC? Charlie Flanagan presented it as an act of compassion for well-meaning individuals who tragically found themselves “on the wrong side of history.” But people saw through this ruse. Clearly it was a gross attempt to celebrate this brutal colonial police force – as part of a broader project, championed by Fine Gael especially, to rewrite history. They have been trying for some time to rehabilitate an especially bourgeois, sectarian and pro-imperialist strand of Irish nationalism, symbolised by John Redmond who convinced tens of thousands to die for Empire in the futile slaughter of World War One. Like the RIC, Redmond and his Irish Parliamentary Party were thrown into the ash-heap of history during the revolutionary period.

It’s no surprise that Fine Gael, a party that represents the wealthy and that allows the US military to use Shannon Airport, admire the RIC, violent enforcers for the rich and for imperialism. An independent Ireland on a capitalist basis in many ways took up where the RIC left off after they were dissolved in 1922, for example with the violent suppression of postal and agricultural workers just a year later by the Free State army. In recent years the Gardaí have been used against protest movements from Rossport to Jobstown and have been engulfed in major scandals.

This planned commemoration would have been particularly brazen and insensitive, openly including the Black and Tans and Auxiliaries. However there is no “right way” to whitewash the RIC. During this period of commemoration, socialists should reject the right-wing revisionist project and highlight the colossal social struggles of the time. This was the period of the 1913 Lockout, the Limerick Soviet, the Belfast engineering strike, four general strikes and countless local struggles.

These massive events are sidelined and airbrushed – not only by the Fine Gael brand of revisionism, but also by more traditional Republican accounts. When we look at the revolutionary period from from the point of view of the labour movement, however, we see that there was nothing inevitable about this island being partitioned into two sectarian and poverty-stricken states. The prospect of the socialist transformation of society was on the horizon, holding the potential for sectarian division to be cut across by working-class unity and for real social and economic liberation.