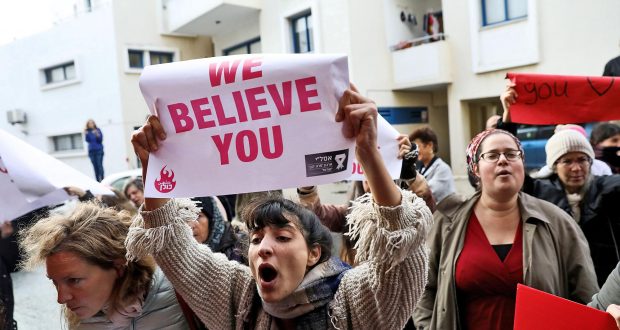 Joint statement from our sister organisations in Cyprus; England, Wales and Scotland and Israel-Palestine.

The 19-year-old woman who reported being brutally gang-raped last July in Agia Napa, Cyprus, was found guilty. Guilty of daring to report a rape and asking the police to investigate it.

The police did nothing of the sort. On the contrary, from the very first days, they turned her from a victim to a criminal without respecting even her basic human rights. She was interrogated for seven hours until she agreed to sign a statement, which she has since argued was essentially coerced, without any lawyer or friend by her side.

Today, the woman received a four-month, suspended prison sentence. While this is still an outrage, it’s clear that the two protests outside of the court – by around 200 women and men from Cyprus, Israel and England – as well as all the international solidarity that the victim received, with protests outside the Cypriot embassies, played an important part in preventing an immediate custodial sentence. This is a small victory, even though there is a long way to go.

Disgustingly, this victim’s already extremely traumatic experience has now been compounded by the state. Diagrams of the injuries she suffered in the alleged attack – marked on a male body and with a blank space on her torso where the police failed to take documentary evidence of her injuries – have shocked millions who are following the case. She has already spent over a month in jail and has been forced to stay in Cyprus for six. All this for the ‘crime’ of reporting her attack.

We should have no trust in these kinds of “investigations”. Indeed, we cannot trust the capitalist state to give the victims of such crimes justice. Under capitalism, the state’s primary role is to uphold and protect a system based on exploitation of the working-class majority. As such, its institutions inevitably tend to reflect and perpetuate the oppressions this system generates – including sexism and racism.

As an immediate step, we demand that working-class women’s and workers’ organisations be given democratic oversight and control over such investigations and trials. We call for full democratic accountability of the police and judiciary. This should include the election of judges; the setting up of committees of workers, trade unions and community representatives to oversee the police’s work and hold them accountable; and the immediate dismissal of all police officers who collude in miscarriages of justice such as this.

This injustice must not be allowed to happen again. During her forced stay in Cyprus, the victim has during that time been hounded every day by the judiciary and the media, while the alleged rapists were let free.

The decision of the court and the continuous presence in the media of the notion that the victim “asked for it”, contributes to sexist attitudes and promotes the idea that rape takes place because women “ask for it”. These victim-blaming ideas must be challenged.

No means no, whatever a woman wears, whether or not she has previously had consensual contact with her attacker, however few or however many sexual partners she may have had previously. All that is irrelevant and should not be used against victims to deny them justice.

Rape is unfortunately a common experience for women all around the world. While the Cypriot government has signed the Istanbul Convention (Council of Europe Convention on preventing and combating violence against women and domestic violence), according to which the Republic of Cyprus has to provide protection to the victim, training to the police and the state on how to handle cases of violence against women, psychological and legal support, translators and, finally, a fair trial, this case highlights that such agreements are ineffectual when signed up to by capitalist governments.

The CWI stands in solidarity with this victim in Cyprus, Britain, Israel and all over the world – against the brutal system of victim blaming, exploitation, and silencing assaults.

From “me too” to “ni una menos” the women’s movement has shown that internationalist solidarity is a key tool we have to fight against injustice. That was evident in this case as well. Since the beginning of the trial there were demonstrations in Israel and more than 265 Israelis donated money for the legal representation of the 19-year-old woman. The protest organised on the 30 December and the mass support for the victim from the local women’s movement – as well as the fact that 52 Israeli women activists flew to Cyprus today, 7 January, to be by the side of the woman, during the announcement of the sentence – has undoubtedly resulted in the victim receiving a less severe sentence than might have been expected. (The law provides for sentences of up to 1 year in prison for this offence). The travel company that the victim came to Cyprus with has also, under pressure, taken the hotel where the alleged assault took place off their lists and destinations. These are small victories, examples of what we can achieve when we fight united and in solidarity.

We support and call for mass protests against this injustice and call for the workers’ movement internationally to take up this issue – organising to defend all victims of sexual violence. Ultimately this means demanding an end to the capitalist system which leans on and perpetuates women’s oppression. Only a socialist society – one based on the solidarity of working-class people – can begin to offer genuine equality to women, and ultimately bring an end to the horrors of rape and sexual violence. These are horrors which a system driven by profit and exploitation allows to proliferate.

We stand by her! 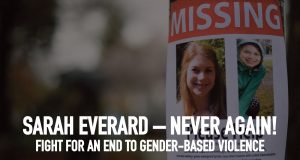