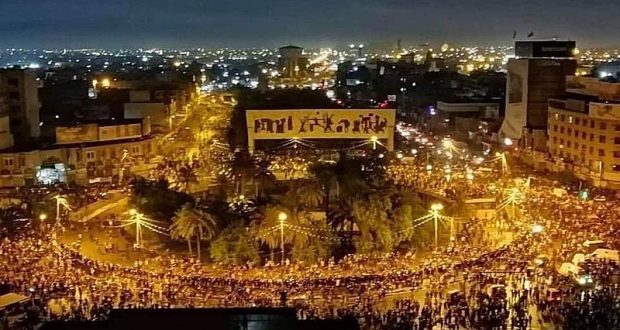 The opening days of 2020 saw news reports dominated by the horrific images and footage of bushfires in Australia and the potential for a new war against Iran. This new year and decade we have entered promises a continuation of the international turmoil, crises and instability, resulting in further hardship and misery for the majority of our planet .

The potential prospect of another imperialist war in the Middle East that will further destabilise this volatile region and the stark and graphic impact of climate change will fill many with a sense of foreboding for the future. This will be added to by the growth of far right and racist forces globally in the last number of years, emboldened by the victory of Trump in 2016.

Our rulers, and the capitalist system they represent, have given us a burning planet and systemic inequality and exploitation as our future. Climate catastrophe, economic slowdown and stagnation (with the growing potential for a global economic downturn), trade wars, military conflicts and inter-imperialist rivalry are all a reflection of the deep malaise this system faces. A malaise that flows from its ruthless, competitive and short term drive for profit.

“People in power have misused it, and now there has to be a change and a better world has to be built”- Malcolm X

2019 was a year of global protest and revolt. In countries and regions as diverse as Chile, Puerto Rico, Hong Kong, Sudan, Iraq, Catalonia, Lebanon and Algeria we saw the willingness of workers and young people to heroically resist oppression, austerity and dictatorial rule. As we go to print French workers are engaging in their longest strike action since the revolutionary events of May 1968 in opposition to Macron’s attacks on pensions. On 8 January, a colossal 250 million workers struck in India against the communalist and capitalist Modi regime. This comes against the backdrop of enormous protests against his law to attack the citizenship rights of the Indian States’ Mulsim population.

For many there is a profound disdain for the political and economic elites that are in power. With low growth and productivity, living standards are increasingly being undermined for workers and young people, while the super-rich are making a killing. In 2019 alone, the richest 500 increased their wealth by a staggering $1.2 trillion. While demagogic forces such as Trump and his ilk may seek to capitalise on the alienation amongst working-class people, the spectacular support that Sanders’ campaign is illustrative of the potential for a powerful left wing force to be built.

The inchoate understanding of the abuses of power of the capitalist class that Malcolm X spoke of over 50 years have also manifested themselves in the global climate strikes. Millions of school students internationally have answered Greta Thunberg’s call for the need for an active movement to demand “system change not climate change”. There is growing understanding that it’s the profiteering of big business, fossil fuel companies and banks that is threatening the very existence of our planet. This movement also illustrates the growing international consciousness, accentuated by the existence of modern social media. Many recognise that the problems that confront working, young and oppressed people are global, and global struggle is what is required to solve them.

This consciousness and the radicalisation of young people can also be witnessed in the emergence of the global women’s movement. This movement emerged and grew throughout the 2010s in every continent on the world against gender based violence, victim blaming in capitalist courts and, as was magnificently displayed in the victory for repeal and abortion rights in Ireland, for bodily autonomy. Opposition to the inequalities of capitalism, both economic and social go hand in hand and are increasingly seen as such.

A key question for the coming decade is how can the working class organise as a cohesive force to end the rule of capitalism. Climate change graphically shows the urgency of this task. The material impact that the system is having on the lives of the majority of people is politicising many and forcing them to question the need for fundamental systemic change. This process will deepen further, particularly with the onset of a devastating global economic crisis.

Combined with the need for struggles against the daily realities of capitalism, the need for the building of a socialist movement will quickly be posed. The outline of this process can be seen in the US with the growth in support in outline form for socialist ideas. Such a movement  means building a struggle of the working class that seizes the wealth and resources of a society from the “masters of the universe”, the ruling capitalist elites that are destroying our future and that of generations to come.