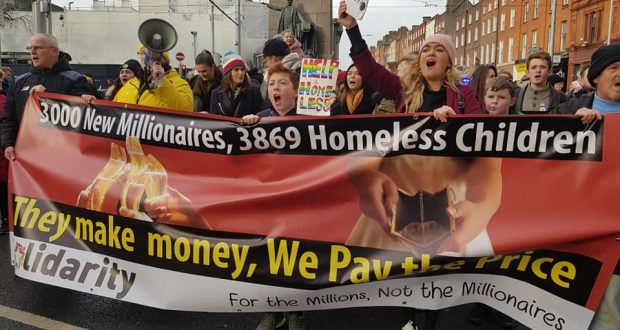 On Thursday 5 December, in the middle of the day, thousands of people took to the streets of Dublin to demand action on the housing crisis. Working-class people from all over the city and beyond, many directly affected by homelessness at some point in their lives, brought their families and friends. All over the country, hundreds gathered for solidarity protests.

This wasn’t the traditional neatly-organised protest with clear start and end point, with people filing leisurely through the streets from one to the other. This was an outpouring of raw anger, a thousands-strong “j’accuse” to a government that doesn’t care, a sign of things to come. Talk of needing a new water charges-style movement was everywhere, and most of all a determination that this can only be the beginning of something bigger. Led not by well meaning NGOs or umbrella groups, but pushed onto the political agenda from below by those most affected – working-class people all over the country.

By Thursday, Housing Minister Eoghan Murphy had already had an eventful few days. As a card-carrying member of that section of Fine Gael who can’t hide the fact that they look down on us, he attracted yet another Motion of No Confidence. In his efforts to save his skin, he boasted in the Dáil how well “Rebuilding Ireland”, another sham government project to deliver homes, is working and that “things are getting better.”

A crisis going from bad to worse

Average rents in Dublin over €2,000 per month. HAP (Housing Assistant Payments) to private landlords will reach €1 billion per annum in 2020. The average age at which people can get a mortgage is 39. Official homeless figures are 10,514.  Almost four thousand children will spend Christmas in homelessness. But the Minister responsible assures us it’s all good.

The reality, of course, is that this government’s housing policy is an abject failure – for the majority of society. One thousand two hundred public homes were built in the first half of 2019 – or about 40 homes per council on average! The refusal to build public homes (social and affordable housing estates) leads to a near-complete reliance on HAP payments to private landlords. Families who, a generation ago, could have been secure council tenants are now forced into the private rental market with no security of tenure.

At the same time, speculation on homes – led by vulture funds and banks – has made the average family home on the private market so expensive that people have to work 15 to 20 years to afford a mortgage. So everyone stays at the mercy of the rental market for longer or is forced to live at home until well into their 30s. Working-class people of any age are now directly affected by the housing crisis. Multigenerational overcrowding in family homes, bed-sharing, modern tenements in the inner cities, overpriced housing estates without facilities in the suburbs – it’s all back.

So why does it continue? Well. It’s not all bad news – if you are part of the super-rich who are making an absolute killing off all this misery. For example, Ires Reit are a vulture fund, a faceless investment opportunity for the richest people in the world. They are now the biggest landlord in Ireland, with a fast-growing “portfolio” of 4,000 homes. They are one of the driving forces in the relentless rent increases in Dublin and beyond. They make millions in profit from it and they pay 0% corporation tax in Ireland.

BAM are an international construction company who are notorious for the overpricing of the National Children’s Hospital and many government projects before. Their year-on-year profits soared. The private firms running direct provision centres netted 72 million from the state in 2018 alone – the accommodation of vulnerable refugees being turned into a profit-seeking business rather than a humanitarian support to help them integrate into their new home and start a new life.

The housing crisis, while throwing hundreds of thousands into untold misery, is a very profitable business for some. This government has made it clear whose side they are on – and it isn’t ours! While asking a Dáil in which over one third of Fianna Fáil and Fine Fael TDs are landlords to vote for rent reductions sounds a lot like asking turkeys to vote for Xmas, the problem runs deeper than that. Any government led by these parties has proven that James Connolly was right when he said “Governments in capitalist society are but committees of the rich to manage the affairs of the capitalist class.”Meanwhile, the main so-called opposition parties – Sinn Féin, Labour, Greens and Social Democrats – have all voted for rotten deals at local level that have seen public land sold off to private developers.

What is the solution

Solutions to the housing crisis are not hard to find: a mass public house-building programme on public land could provide 100,000 homes in five years for a fraction of the current private cost. Taking the big construction companies into democratic public ownership, with local communities having a say, would guarantee that no short cuts are taken and viable new communities are built with appropriate infrastructure. It would also stop price-gouging and guarantee secure employment, proper working conditions and wages for construction workers. Major rent reductions and rent caps can be enforced on a national scale to bring the rent crisis under control immediately.

To implement such measures we need to build a powerful movement on the streets. The water charges movement proved that if we organise, we can win. Working-class mass mobilisations and community organisation can put immense pressure on the powers-that-be.

It also means waking the trade unions, that dormant giant of working-class power. If the unions mobilised their members to take action on this issue, they could directly reach and organise 750,000 workers. This means building a trade union movement that is democratically controlled from below and that will take the necessary action, including industrial action, to ensure that the necessary measures are immediately taken to solve this crisis. This should be linked to the creation of a new party of the working class based on socialist policies that breaks with the logic of the capitalist market that results in housing provision being based on private profit not human need.

From 5 December a further mobilisation has been called for Saturday 11 January. Let’s ensure that this movement grows and grows based on solidarity between all those affected – the working class – so that together we can build that movement that is needed to remove profit as the driving force behind the provision of a home.