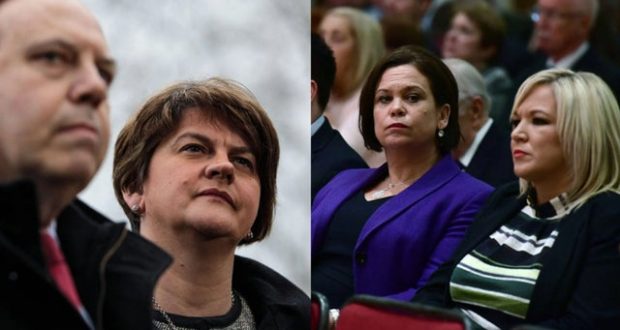 Both the main parties in Northern Ireland – the DUP and Sinn Féin – saw significant falls in their vote share in the recent general election, while there was a substantial increase in support for the non-sectarian Alliance Party. This points to the potential to build a cross-community, socialist alternative in the coming period. However, the fact that more nationalists than Unionists were returned to Westminster for the first time in the history of the state also highlights demographic shifts and processes which are storing up the potential for sectarian clashes if such a force is not built urgently.

‘A plague on both your houses’

The DUP and Sinn Féin saw their share of the vote fall by 5.4% and 6.7% respectively. This is partly explained by attitudes to Brexit. Some Protestant voters punished the DUP for their role in propping up the Johnson government which negotiated a withdrawal deal that would put a hardened border down the Irish Sea. Meanwhile, a layer of Catholic voters switched from abstentionist Sinn Féin to other parties whose MPs would actually go to Westminster to oppose Brexit and Johnson. However, voters were also expressing their frustration with the ongoing political stalemate between the two parties, as we approach the third anniversary of the collapse of the Stormont institutions, and by extension with the growing crises in health, education and rising poverty.

In the face of a ‘remain alliance’ of the nationalist parties and the Greens, the DUP narrowly managed to hold off Alliance leader Naomi Long in East Belfast but failed to take the largely pro-remain constituency of North Down – previously held by independent Unionist Sylvia Hermon, which instead went to Alliance – and lost North Belfast and South Belfast to Sinn Féin and the SDLP respectively. The party’s seat count has fallen from ten to eight overall, and from three to one in the capital. In North Belfast, the battle was largely a sectarian headcount, albeit with Brexit used to motivate voters to turn out.

While they emerged with the same number of seats, Sinn Féin saw the largest fall in vote share and suffered a thumping defeat to the SDLP in Foyle, where their vote almost halved. The SDLP will be buoyed by regaining Westminster representation, but it remains to be seen if this is merely a blip in the context of a unique election or whether they can significantly reverse their long-term decline at the expense of Sinn Féin.

Despite only winning one seat, the biggest beneficiary from disillusionment with the main parties was the Alliance Party, which increased its vote share by 8.8% and moved into third place, ahead of the smaller Unionist and nationalist parties. This has continued a trend seen in the local and European elections earlier this year, with Alliance attracting younger, pro-remain voters and extending its base of support into predominantly Catholic areas west of the Bann.

This is a positive reflection of a growing section of society looking for an alternative to the dead-end of sectarian politics. However, Alliance is an avowedly pro-capitalist, neo-liberal party, which voted – alongside the DUP and Sinn Féin – to give the Tories power to implement their brutal welfare ‘reform’ programme in Northern Ireland. While serving as Minister for Employment & Learning, Stephen Farry – now Alliance MP for North Down – cut the Education Maintenance Allowance and proposed increasing tuition fees. The party has backed the introduction of regressive taxes such as water charges, and implemented cuts and privatisation alongside the other main parties in the Stormont Executive. It does not represent the interests of working-class people and is, therefore, ultimately incapable of really challenging sectarian division. If and when sectarian issues again come to the fore, Alliance can be rapidly pushed back, as we have seen in the past.

A return to Stormont?

Renewed talks aimed at restoring the power-sharing institutions have begun in earnest after the election. An Assembly election is due to be triggered on 13th January if the Stormont Executive has not been restored, although this will likely be delayed again if there is a sense of progress in the talks. Their poor performances will increase pressure on the two main parties to do a deal. Having lost influence at Westminster, the DUP are likely to be particularly keen to retake the reins of power at Stormont. Meanwhile, Sinn Féin have abandoned their ‘red line’ that Arlene Foster must step down as DUP leader until after the RHI enquiry report – expected soon – and Westminster has broken the log jam over marriage equality. Sinn Féin have also signalled their willingness to roll back on the recent decriminalisation of abortion and strive for a compromise on the issue with the DUP.

However, these parties are under countervailing pressures of a sectarian character – partly of their own making – which could make a deal unworkable. A key stumbling block in the negotiations is likely to be the question of an Irish Language Act. Having polarised attitudes on this issue, the main parties cannot simply put the genie back in the bottle. A deal was struck between the two parties in early 2018, but the DUP leadership were unable to sell it to their base.

Threat to the Union can increase instability

There is a deepening sense of insecurity among many Protestants, which has only been reinforced by the election outcome. Unionism has lost its electoral majority position in Northern Ireland, while demand for a border poll is increasing in the Catholic community, particularly in the context of Brexit and the Tory victory. The SNP came close to sweeping the board in Scotland on the basis of demanding a second independence referendum, which threatens the break up of the United Kingdom.

Having won a large majority, the Johnson government will now rush through its EU withdrawal deal – labelled the ‘betrayal act’ by all the Unionist parties – which will create a regulatory border between Britain and Northern Ireland and is seen as pushing towards an ‘economic united Ireland’. This could provoke Unionist protests and even violence on a scale not seen in recent years. Against this backdrop, the DUP may find it more difficult than ever to persuade their base of the need for compromise with Sinn Féin on symbolic issues like language rights. These factors can also increase pressure for Unionist unity – the Ulster Unionist Party increased its vote share by only 1.4% and failed to win any seats in the recent election, underlining the question mark over the future of the former ruling party of the state.

A deal cannot be ruled out, but what is clear is that there will not be a return to the relative stability of the DUP/SF-dominated Executive of 2007-2017. A restored devolved government would be pushed and pulled by sectarian pressures, but also face opposition on class and social issues.

We are seeing an important upturn in industrial struggle. Recently, workers at Harland & Wolff and Wrightbus fought successful battles to defend jobs and the future of their workplaces, raising the demand for nationalisation. Civil servants are currently campaigning against low pay and attacks on terms and conditions, while health workers are engaged in significant strikes for equal pay with their colleagues in Britain – a parity which was broken by the five main parties while in the Stormont Executive – and for investment in a health service which the Royal College of Surgeons has described as being “at the point of collapse.” This growing demand for an increase in living standards and investment in public services would clash against a renewed Executive which would inevitably continue a programme of cuts and privatisation, as would the aspirations of young people for action to tackle climate change and to strengthen LGBTQ and women’s rights.

It is unfortunate that the class unity we are currently seeing on picket lines and protests was not broadly given a political expression in the recent election. People Before Profit (PBP) increased its vote significantly in the safe Sinn Féin seat of West Belfast, coming in second, and maintained its vote in a competitive election in Foyle. While PBP challenges the main parties from the left, it largely reflects the outlook of only the Catholic community and its positions on contentious issues and blunt call for a ‘32-county socialist republic’ mean it can have only limited appeal in working-class Protestant areas.

Labour Party member Caroline Wheeler stood as an independent – due to Labour’s ongoing ban on standing official candidates in Northern Ireland – in the sectarian battleground constituency of Fermanagh & South Tyrone. She took a platform of left, anti-austerity and pro-trade union policies into communities across the constituency and achieved a modest but significant result – 754 votes – despite the tug-of-war between Sinn Féin and the UUP for the seat, as well as limited resources. Following on from Cross-Community Labour Alternative – which the Socialist Party initiated – winning its first council seat in Enniskillen in May this year, this gives a glimpse of what would be possible if the trade union movement brought its weight and authority to bear on the political plane.

In the face of potentially five more years of Tory austerity and the threat of increased sectarian tensions and clashes, the trade union movement must move decisively into action, linking up with young people fighting for a better future. The ongoing industrial battles should be broadened into a generalised struggle for an end to poverty, investment in decent jobs and public services that meet need, and action to tackle the climate crisis. The trade union movement – representing almost 250,000 workers from all backgrounds – must also oppose any political moves which threaten to increase sectarianism, as well as being ready to respond to paramilitary attacks and intimidation through united working-class action.

Crucially, we need to build a genuinely cross-community voice for workers and young people – a political alternative which can unite people across the divide, around socialist policies that represent our common interests and in opposition to the sectarian forces, in a spirit of solidarity, compromise and mutual respect. Only on this basis can sectarianism be fundamentally challenged and solutions found to the contentious issues which divide our communities. The Socialist Party is committed to building such a force, alongside trade unionists and others who want to fight against poverty, division, environmental destruction and the capitalist system in which these ills are rooted.