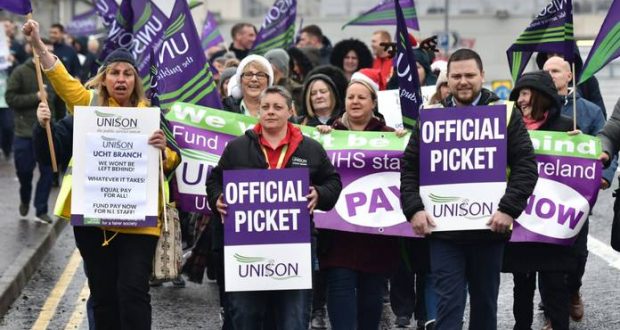 Below is the text of the Health Worker, a newsletter produced by the Socialist Party around the industrial disputes in health that have developed.

The overwhelming endorsement of strike action by members of the RCN, Unison, NIPSA and Unite is a clear indication that health workers are fed up with years of falling pay and inadequate staffing levels. This has already been matched by a strong response to strike action called by Unison.

Over the last year, the Department of Health has twisted and turned at every meeting with health unions to undermine any real progress. They have driven pay discussions into the sand and side-lined unions into detailed circular meetings. These protracted and unconstructive discussions have been profoundly frustrating for health workers.

The Socialist Party supports all action taken by health workers to fight low pay and unsafe staffing levels, including action called by individual unions. At the same time, we believe that action will be most effective if there is meaningful coordination between all the health unions. In this spirit, Socialist Party members in NIPSA, alongside other activists, argued for their union’s work-to-rule to begin as early as possible, in order to join other unions in struggle.

Wednesday 18th December will see workers from the four main unions in health take action together. This should be used as a springboard to step up the pressure, with the formation of cross-union activist committees at workplace level and the development of a plan for further coordinated action. The experience of recent public sector strikes shows that one day is not enough to win real victories. We must be prepared for a sustained campaign of escalating action.

We must reject the idea that there is not enough money to go around. When Richard Pengelly – the Permanent Secretary for Health – received the extra £28 million from the Department of Finance to make a new pay-offer, it demonstrated two things: that the money can be found and that the action taken by health workers is having an effect. The unions are right to reject this offer, which falls short of equal pay with workers in England and Wales – nevermind Scotland – and which many workers have described as insulting. The hard-nosed attitude of of the Health Trusts – who have stated another offer will not be made this year and who attempt to blame the striking workers for the NHS crisis caused by austerity – illustrates the need to keep up the pressure to win pay parity at the very least.

Politicians from the main parties have made a point of showing up at picket lines claiming to offer support. Belfast City Council even unanimously passed a motion in support of the health workers. Correctly, the hypocrisy of the DUP in stating they support the health workers after they voted against pay rises in Westminster has been highlighted. But they are not alone.

All the main parties have signed up to pay restraint, cuts and privatisation through programmes like Transforming Your Care. In 2014, the DUP’s Jim Wells – accepting an austerity health budget – broke parity with England and Wales to keep the 1% pay cap on health workers. This was approved by an Assembly Executive made up of representatives of all five main parties and then continued by subsequent health ministers, including Sinn Féin’s Michelle O’Neill. In the Pay Review Body Report in 2017, she continued to endorse these arrangements, stating that “the NI Executive has endorsed the principle of adherence to the UK government’s public sector pay policy and, therefore, any proposals will be constrained by HM Treasury’s call for future pay restraint.”

Politicians should be reminded of this when they visit picket lines for photo opportunities. In reality, none of the main political parties represent or stand up for the interests of working-class people. That is why the Socialist Party believes it is necessary for the trade union movement not to have a cozy relationship with the Stormont parties, but to seek to build an alternative to them based on uniting working-class people.

Build solidarity between all workers in struggle!

Health staff are not the only workers who have had to take to the picket lines against low pay and attacks on their terms and conditions recently. Civil servants and university staff are engaged in ongoing industrial campaigns and we could see postal workers taking action, despite the undemocratic High Court ruling against their planned strike. Earlier this year, the Harland & Wolff workers received tremendous solidarity during their fight to defend jobs and the future of the shipyard. Now, they are returning the favour by joining workers taking action on picket lines with the banner “Harland & Wolff workers support your struggle”.

Maximum unity will strengthen the hands of all workers engaged in these battles. It is important that attempts by management to pit workers against each other are rejected. We should instead build solidarity with joint protests and, where possible, joint strike action. The Irish Congress of Trade Unions should organise major rallies in the new year to build this unity in struggle.

Our health service is at crisis point. There are now 2,484 registered nurse vacancies and 454 nursing support vacancies across the North. In September, the 12-hour A&E waiting-time target was missed 3,482 times. An incredible 306,000 people — one in six people in Northern Ireland — were on hospital waiting lists for their first appointment. The Royal College of Surgeons warned last month that the NHS here is “on the brink of collapse.”

We are told their isn’t enough money, that there isn’t a “magic money tree”, but there is plenty of money in our society. The top ten richest people in Northern Ireland have a combined wealth of £5.24 billion. Money can always be found when it suits the political establishment’s priorities. There was no lack of money when it came to bailing out the banks. There was no lack of money when it came to Stormont’s pay-day loan to make thousands of public sector workers redundant, or their plans to cut corporation tax. There is never a lack of money when it comes to war. We need to fight for investment to provide real pay-rises and a living wage for all health workers, overcome staffing shortages, provide services that meet need, and kick the private profiteers out of our NHS.

Socialists believe working-class people, through their collective industrial power, have the ability to bring society to a halt. It is this power that makes the fight for socialist change really possible, but it must be organised. We are fighting for a society where the enormous wealth and resources which exist are collectively owned and controlled by working people – those who create it – not the fat-cat elite.

Socialist Party members in the health service have played an active role in organising for action against poverty pay, as have our members in the civil service. Our members in Unite’s hospitality branch are organising low-paid, precarious workers. Socialist Party members, particularly Susan Fitzgerald, also played a central role in the fight to save the shipyard, which showed that, if workers fight, they can win important victories. We are an organisation active in the struggles of workers and young people, in trade unions, communities, elections and in the struggles against oppression. We seek to link these struggles with the need for socialist change. If you agree, join us today!

Documents released by Jeremy Corbyn reveal what we already expected: the Tory government is at an advanced stage of negotiations with giant US drug companies around open-market access to our NHS.

Currently, there are price ceilings on the costs of drugs beyond which the NHS will not go. This allows the NHS to have some say over when and for what price it buys drugs. US pharmaceutical giants are demanding that prices be driven by the “market”. As the recent Dispatches programme revealed, this could lead to a tripling of prices, which will begin the process of opening up the entire NHS to the US private sector.

Any Trump-Johnson trade deal will be in the interests of US multinationals and at the expense of our public services, as well as wages, jobs and security. Trump has fumed that the public sector gives the UK an unfair advantage and is demanding all so-called “protection” is removed as a precondition for any future trade talks. Johnson can deny this reality as much as he wants, but the US will be in the driving seat since they hold all the cards.

This revelation must be the springboard for heightened industrial and political resistance to NHS cuts and privatisation. Every day, we continue to hear of health service horror stories. We are entering into what will be the worst winter crisis yet for the NHS. As one doctor tweeted: “I have been a doctor for nine years. Almost every doctor I know has an exit plan. So many have already gone without hope that things are going to change. I don’t know how many more NHS winters I’ve got left in me”.

Alongside Corbyn, the trade union movement should mobilise to demand the nationalisation of the big drug companies; an urgent injection of funds to resolve the critical staffing levels; the renationalisation of the NHS, expelling the private sector from ALL health provision; the immediate cancellation of all PFI projects; the restoration of free social and residential care; and a living wage for all NHS staff.

The NHS crisis is the tip of the iceberg but it is an institution which the working class will fight for. Regardless of who enters Number 10 after the general election, let’s turn this anger into a mass movement which can be mobilised to overturn cuts and privatisation. 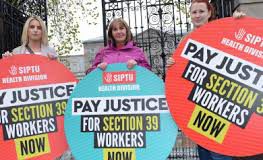