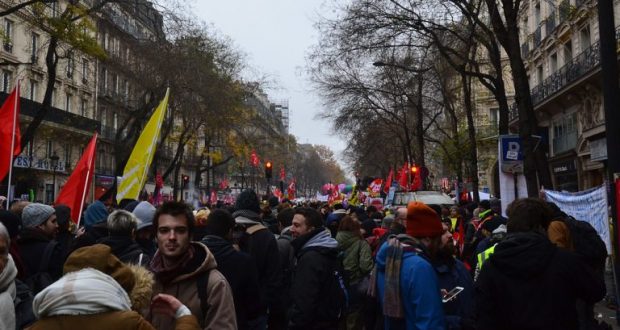 By Nicolas Croes (our sister organisation in Belgium)

The first day of strikes and protests against French President Macron’s proposed reform of the pension system was a resounding and historic success. On Thursday 5th December, there were nearly 250 demonstrations across France attended by no less than 1,5 million people. This compares with the first day of the movement against the proposed new labour law in 2016 which brought 500,000 people onto the streets, according to trade union estimates.  On the next day, Friday, the strike was renewed for an indefinite period in several sectors with a new day of strike action announced for 10th December and a national mobilisation planned on 12th December.

Even before activities on the 5th of December, it was clear that this movement had massive support. On the eve of the protests, a poll by Harris Interactive for RTL and AEF indicated that 69% of the population supported strikes against the pension reform. The high turnout at the demonstrations was predictable, although many were afraid after a year marked by police violence against the yellow vests, during which thousands of people were injured.

The demonstrations brought together workers from the railways, Paris public transport service (RATP), health system and private companies, as well as teachers, pensioners and the yellow vests. The unions claim that 70% of teachers were on strike, some of whom continued on Friday. The CGT trade union federation estimated that 45% of the workers in the public sector were on strike. At Electricité de France (EDF), between 50 and 60% walked out. Still according to the CGT, 61,4% of SNCF railway workers participated. The CGT joined the rail unions UNSA-Rail and SUD-Rail in calling for an unlimited strike. Ten RATP metro lines were closed, more than during the previous strike on 13th September. Even in companies with a weaker trade union tradition, such as Orange, unions estimated the proportion of strikers at 15%, one of the highest rates since the early 2000s.

Ports and docks were at a standstill, while truck drivers organised blockades. Seven of the eight French refineries were on strike. Trade union official Emmanuel Lépine says this is “unprecedented”, even when compared to previous movements in the refineries such as that in 2018 over pay, in 2016 against the El Khomri’s Labour law or in 2010 against Sarkozy’s pension reforms. On Friday, four refineries were still on strike. Even the police were affected by the strike, while Interior Minister Christophe Castaner tried to reassure them by saying that their special pension plan will be maintained.

Everyone knew that a single mobilisation, however impressive it might be, would not succeed in forcing the government to retreat. Those who immediately renewed the strikes on SNCF, RATP, and of some teachers did so, without even waiting for the joint Trade Union meeting involving the CGT, FO, Solidaires and FSU intersyndicale together with the four youth organisations, which met on Friday morning to announce the new day of strike action for today, 10th December.

General assemblies have already been held at various workplaces. The key now is to develop them and anchor the movement as strongly as possible among colleagues, involving them democratically in the organisation of the struggle, especially in the renewal of the strike.

CGT General Secretary Philippe Martinez explained on television: “We must generalise strikes in all companies (…) We must renew the strike until it is accepted that this reform will generate poverty. We must rely on our social base, which is one of the best in the world, and improve it among young people, women and the vulnerable.”

The Macron-government could now be confronted with a strike movement like the one against the pension reform in 1995. That strike movement paralysed public transport for three weeks and received massive popular support, forcing the government to give in. These were the largest strikes since those of May 68. That is the kind of potential we are talking about today.

The current movement is so strong that even the party most opposed to strikes, the Rassemblement National (formerly Front Nationale) of Marine Le Pen, felt compelled to pay lip service to the strike movement. According to the poll mentioned above no less than 75% of Le Pen’s voters support the movement. This struggle can therefore also play a major role in combating the far right, by highlighting what unites workers regardless of their religion or skin colour. The divisive rhetoric of the far right cannot survive significant social mobilisations. But if the movement fails or is betrayed by union leaders, cynicism and disillusionment will open the way for the development of the far right.

France Insoumise and the Yellow vests

In France, the potential for a united struggle of various social movements against Macron and the world of big money he represents, is very clear. Already during the election campaign, the campaign of France Insoumise (FI) and its programme, particularly around “ecological planning”, launched a dialogue on what type of response is needed against austerity and the destruction of our environment.

At the beginning of Macron’s presidency, France Insoumise took very good initiatives to support union struggles and tried to help overcome the indecision that prevails at the top of the trade unions. Unfortunately, the union leaders, with some nuances, blocked any attempt to move towards a national struggle movement supported by general strikes. FI continued its initiatives, but with more emphasis on the fight in parliament. With no more public mobilisations, and also a lack of grassroots involvement, many supporters if FI were left wondering what they could do besides applauding the work of elected officials. The media campaign against FI also didn’t help. The same media did not fail to attack the yellow vests, as they do every time when the workers go into action.

When the yellow vest movement emerged a year ago, it was strongest when it linked up with the workers’ movement, overcoming the reluctance of its leaders. This was the case in Toulouse, where the blockade was massive on several occasions, thanks to the support of truck drivers’ unions.

When the workers’ movement uses its work tools as tools for struggle, by using the strike weapon, it is possible to build a powerful united struggle around it. As with every major social movement in France, there is no shortage of references to May 68 in the press or on social media. At the height of that month of revolution, the combination of struggling youth and a general strike of 10 million workers almost overthrew the system. Social anger is now reaching a boiling point similar to that in 1968. With a real renewable general strike based on assemblies of workers and young people in struggle, it is possible to win the demands of the movement.

The whole system has to go!

Labour productivity has increased significantly in recent decades: we produce more, with fewer workers. It is not true to say that pensions are unaffordable: there has never been so much wealth as there is today. There is more than enough to pay for our pensions, as well as addressing the many other shortages that are affecting society.

Local workers’ and youth assemblies in the workplaces, in the neighbourhoods and so on, can not only democratically decide on the renewal of the strike and the measures needed to strengthen it, but can also collectively debate a broader set of demands. This could include demands such as:

To achieve such a programme requires socialist measures such as the nationalisation and unification of the entire financial sector into a national investment and financing service under the democratic control of the community, as well as the nationalisation of key sectors of the economy so that large companies cannot continue to sabotage the ecological transition and to make sure democratic planning, based on ecological and other needs, becomes possible.

If France is rising up today, it is far from being the only country to do so. Since the first steps taken by the yellow vest revolt, the development of mass struggles and general strikes with revolutionary characteristics has been a powerful feature throughout the world. The list of countries whose governments face mass opposition continues to grow. Let us engage with confidence in this new era of struggle with the aim of leading workers and the masses to overthrow the capitalist system of exploitation so that all humanity can achieve true emancipation through the construction of a democratic socialist society.