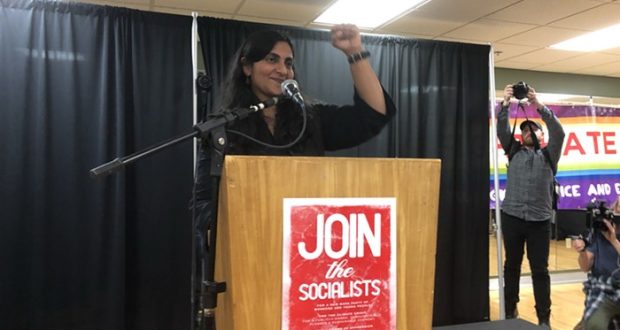 US: How socialists defeated Amazon’s bid to buy Seattle’s elections

Jeff Bezos’s bid to buy Seattle City Council has backfired. Despite big business dropping unprecedented cash behind Amazon-backed candidates in all seven council races, Seattle voters rejected this attempt to flip the council to the right in all but two of the seven council races. In Seattle’s most-watched, most expensive, and most polarized council in decades, Socialist Alternative’s Kshama Sawant appears to have won a narrow victory.

After election night returns showed Sawant behind by 8 points, with 46% to Egan Orion’s 54%, the corporate media and big business sounded triumphalist. But 60% of late arriving ballots counted in the following days swung toward Kshama. By Friday evening’s count Sawant had crested 3.6% past Orion with a lead of 1,515 votes, with that number likely to rise a bit further in the days ahead.

Washington State’s mail-in ballot system allows voters to mail in their ballots up to three weeks before election day. Early voters tend to be older and wealthier, with later voters being disproportionately younger, working class, and renters – those more likely to vote socialist. This year the late ballot bump for Sawant was bigger than ever, a reflection of the huge 58% turnout in District 3. Even our critics in the local media were forced to credit Socialist Alternative’s record-breaking get-out-the-vote operation.

The high turnout also reflected the wave of outrage that swept Seattle in the final three weeks of the election following Amazon’s $1 million “money bomb” dropped on Seattle on October 14. This brought Amazon’s total contribution to the Seattle Chamber of Commerce PAC to $1.5 million, and corporate PAC spending as a whole to over $4.1 million – approaching five times the previous record!

National political figures weighed in against Amazon, followed by a wave of national media attention. The Wall Street Journal’s Editorial Board complained that “Bernie Sanders tweeted this week that Amazon’s spending in Seattle was ‘a perfect example of the out-of-control corporate greed we are going to end.’ Elizabeth Warren decried Amazon for ‘trying to tilt the Seattle City Council elections in their favor,’ adding that ‘I have a plan to get big money out of politics.’”

A referendum on corporate power

Warning that Bezos’s $1.5 million gamble to defeat Sawant and other progressives may have backfired, Seattle Times columnist Danny Westneat said: “The election was playing out as a referendum on the performance of the City Council.” An Elway/Crosscut poll showed 67% of likely voters supporting “someone who wants to change” the Council’s direction. Westneat continued: “Now [the election] could well be a referendum on Amazon and corporate power” (10/23/19).

Of course, the Seattle Times is at the forefront of a relentless corporate propaganda offensive to blame Sawant and other so-called “left ideologues” for the failed “performance of the City Council” in addressing Seattle’s homelessness and affordability crisis, the top concern for voters. The paper endorsed Amazon-backed candidates in all seven council races, portraying them as “change” candidates.

In reality, Seattle’s housing crisis is part of the global failure of capitalism, which treats housing as a commodity to enrich billionaire speculators, rather than as a basic human right. Working people are right to be angry at the inaction of city, state, and federal authorities to address the crisis. But blame for this falls squarely on a political establishment that is complicit with corporate power, not on activists and political leaders like Kshama Sawant calling for universal rent control and taxing big business to massively expand quality public housing.

Amazon executives’ chosen opponent for Kshama was Egan Orion, a fully corporate candidate who posed as a “progressive” to win votes. Orion put posters up all over town saying he accepted no corporate PAC money despite the fact that he applied for corporate PAC money, interviewed with the PAC, and thanked them when he got their endorsement. He sent out mailers with lies about Kshama to every household.

Orion’s supporters tore down over 1,000 Kshama Sawant yard signs throughout the district, and in the final two weeks, they vandalized over 200 signs with spray-painted profanities. Crucial to overcoming the lies and attacks against our campaign was building widespread public awareness about this attempt to buy the election through thousands of conversations on the doors and at street corners by our members and volunteers.

Once again, Seattle has shown that socialists and working people can take on the most powerful corporate titans and win. This victory should give confidence to movements everywhere, from the recent wave of mass anti-austerity and democracy protests spreading across the globe, to the youth climate strikes, labor battles, as well as other socialist election campaigns including Bernie Sanders’ inspiring fight for the presidency.

Yet it would be a major mistake to imagine that similar victories can be won through struggle and determination alone. The role of Marxist perspectives, program, and organization was essential in Seattle and will be vital to defeating the concentrated power of the capitalist class everywhere.

At the start of the election campaign, a de-facto alliance between big business, key labor leaders, and most liberal political figures had coalesced to try and defeat Sawant and block the election of Democratic Socialists of America candidate Shaun Scott in District 4. This anti-Sawant alliance came to life in the aftermath of the “Tax Amazon” campaign in 2018, which went down in defeat following aggressive bullying by Amazon, including threats to move jobs out of Seattle.

The broad coalition built around the Tax Amazon campaign, in which Sawant’s office and Socialist Alternative played a central role, initially won unanimous passage of the tax on the top 3% of Seattle corporations to pay for affordable housing and homeless services. However, facing intense pressure from big business and a well-funded repeal campaign, this coalition was shattered and city council repealed the tax in a 7-2 vote just one month later.

From left-liberal and pro-business voices alike, blame for the defeat was put on the “divisive” approach of Sawant and Socialist Alternative. Despite support from a number of unions, leaders of the Ironworkers and other trades angrily denounced the campaign as a “tax on jobs,” fearful that Amazon would follow through on their threats to cut back new construction in retaliation.

In the August 6 primary, with no endorsements from her fellow city councilmembers or other prominent Democratic Party politicians, with labor publicly divided, Sawant received just 37% in the primary election. “No incumbent in recent memory has survived a primary showing that low,” wrote Westneat in the Seattle Times (8/7/19). “[T]he days on the council for the crusader for rent control and taxes on big business could be numbered.”

The fight for unity against Amazon

If Sawant and Socialist Alternative had adopted the approach of most liberal and labor leaders to try and avoid a direct confrontation with Amazon, it’s likely Jeff Bezos’ bullying strategy and attempt to buy the city council would have succeeded. There was nothing automatic about the widespread working-class distrust toward corporate power getting organized into a coherent fightback.

In fact, most elections across the U.S. don’t feature bold working-class challenges, given the corporate domination of the two-party system. Even in Seattle, where the local Democratic Party organizations have shifted leftward under the impact of Sanders and other left challengers, this hasn’t resulted in strong working class fighters running for city council in most races.

Socialist Alternative based our electoral strategy on confidence that, if offered a fighting lead, working class and young people in Seattle were capable of defeating Amazon and big business. Crucial to this strategy was the potential for working-class pressure from below to push progressive and labor leaders off the sidelines and into a united fight with us against Seattle’s corporate establishment. Socialist Alternative members provided the Marxist backbone of this strategy. Their energy, self-sacrifice, and political skills successfully built  perhaps the most powerful grassroots election campaign in Seattle history.

Over 1,000 volunteers and SA members have helped us knock on over 225,000 doors and make 200,000 phone calls. 7,900 working people donated to the campaign, and with a median donation of $20 we raised $570,000, smashing all previous records for both the number of donors and total amount raised. We’ll be publishing a fuller report of this historic effort soon.

The dynamic unleashed after the primary election confirmed our strategy. Candidates backed by Amazon and big business moved on to the general election in all seven council races, facing off against more progressive candidates. With the looming threat of the Chamber of Commerce engineering a wholesale takeover of City Hall, our call for maximum unity against big business rapidly gained traction among grassroots activists, exerting pressure on bigger political players.

More endorsements for Sawant, as well as Shaun Scott, began rolling in from progressive leaders and groups who had sat on the sidelines in the primary. The scandalous effort of conservative labor leaders to win Egan Orion the Labor Council’s endorsement was defeated when over 300 union members signed an open letter in protest. By the final weeks, 21 unions had endorsed Sawant – a substantial majority of the union locals who endorsed in the District 3 race. A joint event promoting a Green New Deal for Seattle was organized with Sawant, Morales, and Scott speaking, an important display of programmatic left unity that was absent in the primary.

In a major defeat for the business-backed Democratic establishment who have long-dominated city  politics, local Democratic Party groups endorsed both Shaun Scott and Kshama Sawant in September (they had already endorsed Morales in the primary). Sawant is the first independent socialist ever endorsed by Seattle’s Democrats, and this endorsement was made despite her very public calls for left Democrats, labor, and social movements to join together to build a new party for working people. This victory, the product of an energetic grassroots effort, was linked to passing resolutions condemning corporate PAC spending  through four Democratic Party organizations.

All this laid the basis for our re-election campaign to become the central driving force behind a unified response when Amazon dropped their $1 million money bomb on October 14th. Alongside the Democratic Party groups, we organized a press conference two days later outside of Amazon headquarters, followed by rally called by Amazon workers a week later.

This broke the dam. A wave of national media coverage followed. In a high profile reversal, even Lorena Gonzalez and Teresa Mosqueda – the liberal city councilmembers who had publicly called for Sawant’s defeat in the primary – felt compelled to speak at the rally against Amazon and announce their endorsement of both Sawant and Scott. A wave of other progressive Democratic Party leaders followed suit.

The  naked attempt by Jeff Bezos to buy Seattle City council backfired, but only because it met a well-prepared united front strategy to mobilize working class anger into a unifying force, pushing even reluctant labor and liberal leaders into alliance with socialists to fight big business. The role of Socialist Alternative, with our clear analysis, strategy, and a politically self-confident membership, was absolutely vital to moving these wider forces into united action.

As the wave of socialist election campaigns across the country continues to expand, the rich lessons of how we defeated Jeff Bezos in his hometown can help serious socialist organizers develop winning strategies for working class struggle everywhere.