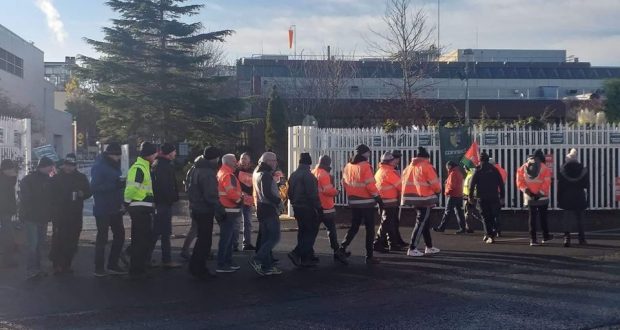 One hundred and fifty SK Biotek workers, members of SIPTU and Connect, have been locked out for a week by their bosses in response industrial action that they started last month.

The pharmaceutical manufacturing plant has been in operation in Swords for over 40 years originally as Bristol Myers Squib until December 2017 when it was sold to SK Biotek. This is the third biggest company in South Korea and were seeking to break into the EU market.  The average length of service of the striking workers is 20 years.

When the purchase of the company took place SK Biotek promised to adhere to TUPE (Transfer of Undertaking) legislation and not seek any negative alteration in pay and working conditions for at least five years. However, after six months they sought radical changes in conditions on a take it or leave it basis and have now resorted to a lockout in the face of the resistance from the workers.

This dispute highlights the limitations of the TUPE legislation. TUPE technically guarantees the preservation of pay and conditions (apart from pension conditions) at the point of sale but there is nothing preventing the purchasing company to launch an assault on pay and conditions in a short matter of time ostensibly for “business reasons” ie maximising workers rights and pay in the interests of private profit.

When it came to the pensions the previous owners Bristol Myers Squib only two years ago forced through a change from defined benefit to the less advantageous defined contribution. Clearly they were motivated to make the company more saleable to prospective buyers by attacking the pension scheme like this.

Meanwhile, SK Biotek have recently invested €30 million in the expansion of the plant in Swords. However, the construction of the additional facility has been stalled as construction workers have respected the picket line. The very fact that this investment has taken place and the Swords plant is SK Biotek’s  only manufacturing plant outside of South Korea gives the workers good leverage in this struggle which is not to say that it won’t be protracted.

The lock out of SK Biotek workers is a serious attack on the right to organise and oppose a race to the bottom. It must be met solidarity from the wider trade union movement, both in Ireland and globally. Direct contact with the workers in South Korea would and common struggle to ensure equal pay and conditions would greatly enhance to prospects of victory. Likewise if the non-handling of SK Biotek products by transport workers and pharmacists was pursued. The Socialist Party and our Solidarity public representatives will support any steps the workers take to ensure the SK Biotek’s lock out is defeated.