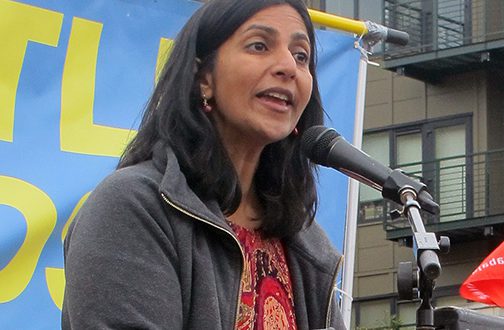 It is not typical for a city council election contest in the US to be the subject of national and international attention. Socialist Alternative (US sister organisation of the Socialist Party) councillor Kshama Sawant’s successful defence of her seat was one such case. The concerted attempt by wealthy Republican Party donors and big corporations to unseat her by pouring money into her opponent’s campaign made this contest stand out from all the other local and state-wide elections taking place across the US this month.

Above all, Amazon’s intervention three weeks out from polling day, when they donated $1.5 million to a corporate political action committee (PAC) run by the Seattle Chamber of Commerce, proved to be a game changer. It woke up working-class people across the city and beyond to the lengths big business were willing to go to wreak revenge against a socialist councillor who, in the course of the last term, placed the demand to tax corporations front and centre. The total war chest of this corporate PAC topped a staggering $4 million.

This was a crude attempt by Jeff Bezos, owner of Amazon and one of the wealthiest people on the planet, to buy the election. The money donated by Amazon and others was geared towards funding their chosen candidates in all of the district contests. But unseating Kshama Sawant was their number one priority. $440,000 of Amazon’s $1.5 million donation was spent on prime time TV ads and attack leaflets specifically targeting Kshama.

However, rather than cowering Kshama Sawant and Socialist Alternative, there was a fighting response which pulled in broader support. In the week of the Amazon donation, a press event was organised involving Kshama and other outgoing councillors and candidates opposed to big business interference in the election. The week after, a high-profile, well attended protest took place outside Amazon’s headquarters in downtown Seattle.

National figures like self-proclaimed democratic socialist and Presidential contender Senator Bernie Sanders weighed in, condemning Amazon and endorsing Kshama and other candidates who were the target of the corporation’s attack. Another Presidential hopeful, Senator Elizabeth Warren, likewise implicitly endorsed the left and progressive candidates in her condemnation of Amazon.

A right-wing narrative was put forward, echoed by soft ‘progressives’, that Kshama was ‘divisive’ and unable to work with others, which was a backhanded compliment, acknowledging her refusal to cut unprincipled deals with pro-establishment councillors. However, she and Socialist Alternative demonstrated that they could build broad support among union branches and community organisations for key demands like taxing big business, the Green New Deal and rent controls.

Socialist Alternative and its allies were able to meet the challenge of Amazon and their stooge candidate, Egan Orion, through a stepped-up ground campaign that the millions of corporate dollars could not match.

In the course of the election, Kshama’s campaign raised some $550,000 from a combination of small-scale fundraisers and direct donations from 7,000 individuals, averaging $20. Not a cent came from the corporations.

Twenty local unions backed Kshama’s campaign. Over 1,200 people were registered by the campaign to vote, many of them students and workers suffering the worst consequences of the rapid gentrification of the city and spiralling rents, who responded enthusiastically to the call for rent controls.

The Amazon donation, however, proved to be a massive turning point, not just in terms of more solid commitments for votes for Kshama being recorded, but also a massive spike in donations and people volunteering to help in the campaign.

Orion, by contrast, had tens of thousands of dollars to pay canvassers. His application and acceptance of corporate cash clarified for many that he was a fake progressive, despite his claims otherwise.

Socialism rising in US

The eventual turnout in the district was ten percentage points higher than neighbouring areas. This was the working class putting its stamp on the contest. Kshama’s victory against Amazon has since featured in the international media, as well as all the national media in the US.

More importantly, it has enthused millions of working-class and young people across the US who are looking for a left alternative to the two parties of big business. Kshama’s victory is up there with the support Bernie Sanders is obtaining for his Presidential bid and the prominence of the ‘squad’ of left women Congress members, especially Alexandria Ocasio-Cortez. The massive growth in support for anti-capitalist and socialist ideas in the US and the building of a new working-class movement based on these will have a global significance.