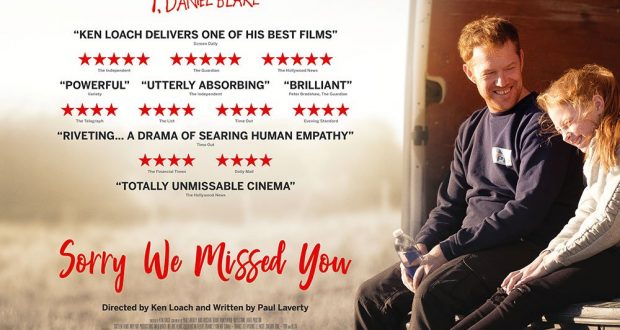 Sorry We Missed You is a gritty and gruelling look at the “gig economy” by Ken Loach and the award winning team behind I, Daniel Blake. It’s a powerful exploration of the modern world of work and the challenges facing one particular family struggling to keep it together, set in and around Newcastle in North-East England.

Ricky Turner (Kris Hitchens) is a hard-working husband to Abby (Debbie Honeywood) and father to graffiti-mad teenager, Seb (Rhys Stone) and clever, bright Liza Jane (Katie Proctor). Ricky has being doing bits and pieces of casual work since losing his job in construction during the downturn. The family lost their deposit on a new home, as well as their life savings, when Northern Rock bank crashed – leaving so many people penniless. They were forced to rent in the unstable private rental market.

On the recommendation of a friend, Ricky seeks out employment at a delivery-depot where Maloney (Ross Brewster) – a heartless, hard-nosed, depot manager – tells him: “You don’t get hired here. You come on board. We call it on-boarding. You don’t work for us. You work with us.”

Ricky is sold on the dream and opportunity to become a franchise owner, his own boss, and be free from wage-slavery. Everything is “your choice”. In reality, the only thing he’s free of is basic workers’ rights and secure employment. From the beginning costs start to add up. He has to find a £1,000 deposit to buy a van rather than pay the extortionate rate of £65 a day to rent one from the depot. To achieve this the couple have to sell Abby’s car.

Abby needs her car for her own work as an agency care worker on a zero-hour contract. She’s already overstretched travelling between short appointments with elderly and housebound “clients”, often missing meal breaks, and struggling to remain empathetic while respecting the dignity of the people she cares for with her golden rule of “treat them like your Mam”. Working from 7.30am to 9pm, she goes over and above her job remit with no financial reward or credit. All this while trying to hold her family together, now she has to use public transport – paying her own fares.

Both parents working long hours and exhausted at the end of the day inevitably causes their family life to suffer. There is no space left for much-needed ‘family time’. Seb is skipping school and getting involved in petty crime. Liza Jane takes everything to heart, feels responsible, and starts bed wetting. She sees her parents struggle and wants things to be “the way they were”. Ricky and Abby are so drained that things come to a head and the normally calm Ricky lashes out in frustration, hitting young Seb.

Meanwhile the financial costs of working “for himself” begin to build up when Ricky incurs thousands of pounds in fines and sanctions for not showing up on time, losing a parcel or his tracker – even when he is badly beaten up and robbed by thugs.

The callous indifference and ruthlessness of the so-called “gig economy” is truly laid bare in this film. It is a timely and powerful depiction of the life endured by of millions of workers in the 21st century.

There is an interesting cameo in the film by Heather Wood, one of the leading activists during the Miners’ Strike, who plays Mollie – one of Abby’s clients. Wood set up the first miners’ food kitchen at Easington Colliery two weeks into the strike and helped mobilise hundreds of women in support of the long struggle against the Thatcher government. One wonders how much things have deteriorated for workers in Britain even since that time.

Loach, while showing the hopelessness experienced by many families in the precarious living conditions of Tory Britain, also manages to show the warmth, strength and humanity of ordinary working-class families in their struggle for decent lives.

Sorry We Missed You is a must see. It should act as a spark to the trade union movement to step up to the mark and fight to organise all precarious workers – from Deliveroo to Amazon – and end the ultra-exploitative practices of the gig economy, and the capialist market as a whole. 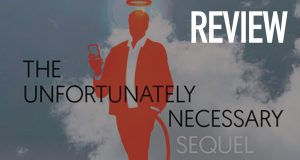 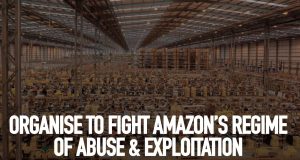