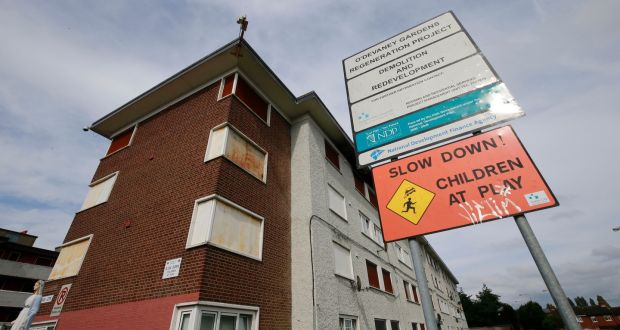 The ruling administration of Dublin City Council, composed of Fianna Fáil, Green Party, Social Democrats and Labour, have picked up from where the previous Sinn Féin led administration left off. They’ve agreed to the privatisation of council owned land, in this instance O’Devaney Gardens, in return for a paltry delivery of public housing.

As far back as 2008, the government planned to sell this development in a Public Private Partnership to private developer McNamara for regeneration before he went bust. A second attempt, under the “Land Initiative” project backed by Sinn Féin similarly fell through.

Sell off to private developer

However, at the third attempt this month the ruling coalition of Dublin City Council as well as Fine Gael voted to sell the land to private developers. A property development company, Bartra Property Capital Group, has been awarded a windfall deal that would see them build 800 homes, 400 of which would be sold for private profit, 240 being sold at a misnamed “affordable”  price of approximately €300,000 each, and the remaining 20% being used as social housing.

The route of this approach lies in the state debt and deficit rules which were enshrined in law in the aftermath of the EU Fiscal Compact Treaty Referendum. Any borrowing by the local authorities, for example to build public housing on their own land, is included in the state debt and deficit figures. Thus Dublin City Council officialdom argue that the only way to deliver housing is to get private developers to borrow the money to build on council land and take a massive cut of the units for themselves to sell for a profit.

Accepting the rules of the system

All the parties apart from the left (Solidarity/Socialist Party, PBP, WP, I4C and some left independents) have supported this form of privatisation at least some of the time if not on all occasions over the last decade.  Summing up the view of the fake left, councillor Garry Gannon of the Social Democrats said… “We’re dealing with an ideology that is neoliberal, that says if we don’t take this particular deal that we’ve approved well then what’s going to happen to the site is nothing”.

Capitulating immediately to the so called lesser of two evils without attempting to wage a struggle in co-operation with housing activist groups, the trade union movement and people on the housing waiting lists  is the product of accepting the logic of the capitalist system. The protests on the night of the council meeting at City Hall were completely justified contrary to the outrageous accusations of “fascism” by Fianna Fáil councillor Tom Brabazon.

Public housing for all

So long as they work within the given framework politicians will be forced into a faustian deal with the profit motive, and continuously capitulating to the neo liberal agenda of commodifying everything under the sun.

The other argument made to justify this treachery is that a “mix” of social and private housing is needed so as not to create ghettos. Apart from the demeaning attitude towards council tenants, this view is wrong. Because low income thresholds for eligibility for applying for social housing have been in force for the last decade public housing has become synonymous with poverty.

We need to eliminate the thresholds and permit working class people of all incomes to apply for social housing. This was the situation that prevailed when cohesive working class communities came into being in the middle of the twentieth century in places like Crumlin, Marino, Ballyfermot and Cabra. Mass public home building across the state is what is needed to deal with the growing housing crisis.