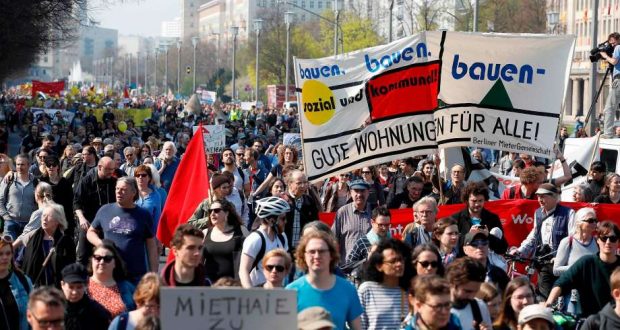 by Lucy Redler, SAV (our sister organisation in Germany)

Debates about the need to nationalise housing corporations have been continuing for months in Berlin and across Germany. The discussion was initiated by the Berlin based campaign to “Expropriate Deutsche Wohnen & Co.”, which the SAV (German section of the CWI-majority) supports. As a result, the state parliament is to vote on introducing a rent freeze.

The campaign was launched to demand a referendum to be held on the nationalisation and democratic control of the private housing corporations, which own more than 3000 housing units in Berlin. This radical demand has met wide support: half of Berlin’s inhabitants of Berlin agree with the proposal as a means to stop the sky-rocketing rents in Germany‘s major cities. In Berlin, rents for new lease agreements rose by 75% between 2008 and 2018.

In April 2019, 40,000 people demonstrated against the #Mietenwahnsinn (rent madness). This pushed the parties represented in the state parliament of Berlin to react both to the movement itself as well as to the clear public support for nationalisation. Initially, the Berlin Social Democratic Party proposed a rent freeze as an attempt to take the wind out of the sails of the “Expropriate Deutsche Wohnen & Co.” campaign, however they were pushed further than they wanted when the initiative and the Left Party called for a combination of a rent freeze and nationalisation. Now a coalition of the SPD, Greens and Left Party will vote on the bill to freeze rents.

1,5 million households living in Berlin apartments built before 2014 that are let on the free market will benefit from a freeze on the rents at current levels for the next five years. When re-letting an apartment, rents cannot be higher than those in the previous lease, although if they are lower than 5 euros a square metre, they can rise to that level. A maximum rent is set of between 6,45 and 9,80 euros a square metre depending on the age and quality of the building. Finally, current tenants have the legal right to a decreased rent if under their existing agreement they pay a rent 20% higher than the maximum rent for re-lets.

The Berlin state government estimates that 300,000 tenants will be entitled to a lower rent. However, many tenants might be afraid of applying for a reduction for fear of a confrontation with their landlord. The bill will initially only be in force for five years and parts of it could still be annulled by the courts.

How much of an effect will the freeze have?

The details of the rent freeze have been the subject of a highly controversial debate for weeks. The initial proposal by the Left Party-led Ministry of housing leaked at the beginning of the discussion was much more radical than the current bill. It was watered down following massive pressure from the coalition partners, bourgeois media and the real estate industry.

A full assessment of the extend of the challenge to the property rights of housing corporations by the current rent freeze bill can only be made when it becomes clear how many people benefit financially from the rent decrease. Naturally, the landlords will come up with all kinds of strategies to circumvent the bill.  Rouzbeh Taheri, a representative of the “Expropriate Deutsche Wohnen & Co.” campaign, has pointed out to the press that corporations have many ways to circumvent the bill to preserve their profits, by converting rental apartments for ownership, by reducing maintenance costs and by finding creative ways to charge more for utilities.

Success of the movement

However, the result is indisputably an important success for the tenants‘ movement, which could not have been achieved without the protests and the political pressure caused by the debate on nationalisation. This also left the SPD unable to remove the clause allowing for rent decreases from the bill.

The rent freeze is not to be confused with the federal rent control measures introduced in 2015 that had close to no effect. Back then the federal government passed a rent control bill to pretend to be doing something about increasing rents. In fact, real estate corporations were still able to increase rents virtually unhindered.

This rent freeze goes much further and will actually have some effect, although it could be more limited than many now hope.

For Berliners, the bill mainly provides some breathing space, but it will not solve the fundamental problems in a housing market dominated by private corporations. It is necessary to continue campaigning energetically for the nationalisation of the housing corporations and to fight for the construction of massive numbers of affordable apartments by state-owned housing corporations.

A new wind behind the nationalisation campaign

The SPD‘s plan to derail the movement will not work: the rent freeze does not take the wind out of the sails of the campaign to nationalise housing corporations. On the contrary. According to a poll taken in late October, 46% of Berliners support nationalisation, 46.1% are against it.

The movement‘s main demand in recent weeks has been “First freeze, then expropriate.“ In the first stage of the nationalisation campaign, over 70,000 signatures were collected. The campaign is now waiting for a court decision giving the go-ahead for the next stage of the referendum campaign.   According to the rules for referendums in Berlin, 170,000 signatures have to be collected to hold a vote and then, in the actual referendum, over 600,000 Berlin voters have to vote in favour for the nationalisation bill to come into force. This means that now, more tenant initiatives must be organised with the protest movement built further.

An alternative to the current system

Under capitalism, corporations will always find ways to circumvent any law in order to increase their profits as long as they still own the apartments. The same applies to privately-owned factories circumventing environmental protection laws. The nationalisation of the biggest housing corporations would be a huge step towards lower rents. It would also be a political encouragement to pose the question of ownership in other areas as well. The nationalisation demand is an attack on property relations in society, and thus on capitalism itself. The ruling class understands that quite well. They’re afraid of this demand being applied to other areas. This is precisely why the demand for the nationalisation of real estate corporations creates so much pressure.

SAV will continue to energetically campaign for this demand. We also believe that the Left Party, with 60,000 members, a group in the Federal parliament and many full-time employees should use the openness that there is to the idea of nationalisation to promote debates on what a socialist alternative to the existing capitalist system could look like and how we can build support for such ideas today.

Without the movement of recent years and the “Expropriate Deutsche Wohnen & Co.” campaign, there would be no rent freeze. The debate on nationalisation of major housing corporations in recent months shows how a small campaign group can take up a mood that exists in the population and develop it towards activity for a radical demand, achieving significant concessions in the process. The Left Party supported the campaign for the rent freeze and the nationalisation of real estate corporations. Even the federal congress of the ver.di service sector union voted to support the nationalisation demand. For weeks, nationalisation was discussed on TV talk shows with the housing mafia ferociously attacking the idea, accusing the Left Party of “setting Berlin on fire” by trying to re-introduce a planned economy.

This was, and remains, a great chance for socialists to bring up the necessity of nationalisation in other areas as well. If the housing corporations can be nationalised in the struggle against rent increases, why not nationalise energy corporations in order to save the climate? During the debate, the leader of the SPD‘s Young Socialists, Kevin Kühnert, proposed to bring one of the major car corporations in Germany into public ownership. The German media discussed this question for weeks.

This is a glimpse of what would be possible if radical demands were not just posed at the right time by a small campaign group, but by the Left party and the trade unions not just following and supporting such processes, but by initialising and, as far as the unions are concerned, also campaigning for them.