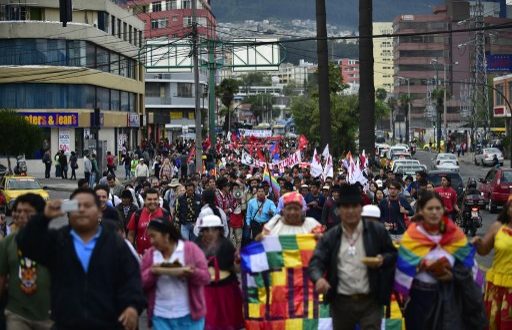 No to a new austerity paquetazo! For a workers and indigenous peoples’ government!

By Tony Gong, Socialist Alternative, (our sister organisation in the US)

On the first day of October, President of Ecuador Lenín Moreno ended the country’s fuel subsidies as part of an economic restructuring deal from the International Monetary Fund (IMF). Less than two weeks later, Moreno was forced to restore subsidies after tremendous protests from trade unions, indigenous groups, and students forced him to flee the capital! Across the entire country labor unions went on strike and indigenous protestors shut down oil production, demonstrating the power of working and indigenous masses and showing the way forward for further resistance to the IMF’s neoliberal program.

Moreno won election in 2017 on a rather timid left reformist platform of increased public spending. He was the favored successor of previous president Rafael Correa, who grew the social welfare system through oil exports but failed to maintain it after commodity prices collapsed in the mid-2010s. Once elected, Moreno veered sharply to the right. His twin focuses for the Ecuadorian economy come out of a neoliberal playbook: pay off foreign debt and attract foreign private investors! Moreno capped the growth of public spending to only 3% per year, with deficit spending only allowed for debt repayment. He forgave a portion of the $4.3 billion in taxes owed by private companies and in February 2019 started privatizing state enterprises including the highly profitable National Communications Corporate (CNT). He also continued Correa’s oil exploration and exploitation in the Amazon, inviting foreign companies to drill without consulting indigenous inhabitants or any concern for climate change.

At the same time, Moreno signed a $10 billion loan with the IMF and World Bank. Tools of imperialist capital, the IMF and World Bank do not just ask for loan repayment but often demand “free-market” structural economic reforms to best suit imperialist interests, whether it’s removing barriers to foreign investment or weakening domestic competition. As part of this loan package, the details of which were announced only at the start of October, Moreno signed off on six measures and thirteen labor reforms, which include tax breaks for corporate purchases of equipment and raw materials, halving state workers’ vacation days from 30 to 15 and reducing their wages by 20%, and the infamous end of fuel subsidies. The government will only save $1.3 billion from cutting fuel subsidies, yet overlooks $4.3 billion in corporate back taxes! It’s clear that Moreno is attacking the living conditions of working people and the poor in order to pay for new corporate subsidies.

Mass Resistance to the Paquetazo

When fuel subsidies ended, overnight the price of gasoline shot up over 30% and the price of diesel doubled affecting mass transit, shipping, and commuting causing ripple effects on the rest of the economy. The day after the IMF package was announced, the country’s largest indigenous organization CONAIE, the central trade union organization FUT, and other groups jointly announced national protests against the paquetazo (package). Eleven transport unions representing truck, bus, and taxi drivers across the country went on strike on Thursday October 3, with workers and their vehicles blocking major highways crippling shipments and food delivery, and blocking the entire northern entrance to the capital of Quito as well as all major roads within it. The mighty power of the working class was on display as the whole country shut down. Moreno immediately declared a state of emergency for 60 days, giving the military unprecedented executive power, but just a day later was forced to concede to the FUT an increase in fares and a provision of credits to compensate for higher fuel costs in exchange for stopping the strike.

In the meantime, CONAIE and other indigenous groups mobilized massive numbers to the capital, beginning an occupation of tens of thousands. In the city, workers, indigenous groups, and students united in protest and set up barricades, while indigenous groups blocked arterial north-south highways and seized oil fields. By October 8, the government had lost control over the capital, with protestors briefly occupying the National Assembly. Moreno announced a curfew and fled to the city of Guayaquil, eight-hours away by car. That didn’t stop the movement – the Guayaquil protests grew to tens of thousands in response to Moreno’s arrival, and FUT and CONAIE announced and carried out a second, indefinite general strike on October 9. In Quito, the few streets that remained open were patrolled by rolling caravans of honking taxi drivers displaying anti-Moreno slogans. Indigenous groups by now had also seized one of Ecuador’s two major oil pipelines, which along with seized oilfields had shut down 68% of the country’s oil production costing almost $13 million per day.

In Quito, Guayaquil, and other cities, riot police battled protestors with weapons, armored vehicles, and tear gas, ultimately wounding over 1,300 protestors and killing eight over the course of the protests. Police repression was especially harsh because Moreno had no intention of backing down, saying “I don’t see why I should if I’m making the right decisions.” There have been right-wing counter-protests, miniscule in number but notable for their leading participants: all disgraced politicians from Ecuador’s traditional right, including impeached former president Abdalá Bucaram, reaching out in support of Moreno. This proves once again that the political elite are all on the same side and will support each other to stop the working class and oppressed layers of society from making change.

On October 12, Moreno deployed the army into the streets of major cities to “restore order in all of Ecuador,” beginning an indefinite 24-hour curfew. CONAIE responded with a call for escalation and radicalization of action. On October 13, Moreno finally relented and negotiated a deal with CONAIE to restore fuel subsidies in exchange for social peace, and promise of future negotiations regarding the pending economic reforms. Indigenous groups demobilized their supporters and many returned to their homes far from the cities.

Reject the rest of the Paquetazo!

The fuel subsidies may be restored but the rest of the paquetazo and other neoliberal reforms are still on the table. Corporate tax breaks, privatization of state companies, and reduction in vacation days and pay for state workers remain a great threat to working people. These reforms must be fought with mass mobilization, but there is a danger that leading organizers feel the battle is won and do not mobilize to hammer home the movement’s advantage to defeat the entire package. The FUT has decried the labor reforms but cancelled a protest on October 30 in exchange for a seat at the bargaining table with Moreno.

There is a danger that these negotiations will only result in delays, runarounds, and loopholes that don’t really change the essence of the deal with the IMF. Moreno’s administration has already refused to negotiate with CONAIE in good faith, instead accusing the group of criminal acts and rebellion. If Moreno would go as far as to deploy the army to repeal fuel subsidies, and would not back down until after two general strikes and several mass occupations, he is not going to give up the rest of his program at the bargaining table unless faced with the threat of a renewed revolutionary offensive! Both FUT and CONAIE would have had more leverage if mobilizations to repeal the rest of the reforms had continued during any negotiations. Any negotiations must be carried out in public and under the watchful eye rank and file committees and assemblies of workers, indigenous and young people, who must have the final say on any deal.

Moreno is buying time to prepare for another round of protests if he is unable to satisfy FUT and CONAIE with minor concessions. Both organizations should plan another round of protests, this time for coordinated and, if necessary, prolonged struggle. The resistance to the package was weakened by labor leaders and indigenous groups both reaching a “separate peace” with Moreno during the protest, and by the separate talks they are engaging in now.

Throughout Latin America, it is only when workers and indigenous people fight together that they have the power to face up to local oligarchs and imperialism. The working class has an important role to play in leading the struggle, especially a prolonged one. Workers can shut down industry and transport from within their cities and workplaces, and produce necessities for working-class and indigenous communities during a prolonged strike. Workers at oil fields and pipelines can coordinate with indigenous peoples to stop production, and workers must defend indigenous peoples mobilizing into the cities against the racist backlash of the right-wing city elites. Workers can also take over the broadcasting stations that demonized indigenous protestors as “lazy,” “hillbillies,” or worse, and switch the broadcast to messages of solidarity.

The working class must aim the strike straight at the main forces behind the package, the corporations domestic and foreign that seek to plunder Ecuador’s natural and human resources. And in turn workers must fight for indigenous demands, for their right to their land, and against the destruction of their communities and environments for profit, and indigenous groups must fight for workers’ demands.

Which way forward for Ecuador?

If Moreno refuses to budge on the rest of the package, FUT and CONAIE should call a mass mobilization to defeat the whole package, and prepare an alternative of indigenous and workers’ power. The movement needs to present its own political alternative, because none of the current major parties, all united in defense of the package, can provide a credible alternative to neoliberalism. While former President Correa has shown sympathy with the protests, his record in power of bending to the interests of capitalism and imperialism shows the need for a new political force prepared to struggle to the end.

Moreno’s future is certainly in doubt, especially because Ecuadorians have living memory of deposing multiple presidents in multiple ways – from 1996 to 2007 not one Ecuadorian president could complete a single full term. It wasn’t an impeachment or a coup that finally ended the rule of neoliberalism in the 2000s, it was a revolutionary movement demanding a radically different type of economy. So-called “Socialism in the 21st century” took hold across Venezuela, Bolivia, and Ecuador in the “Bolivarian Revolution,” which saw left governments take power and nationalize or reprioritize state oil profits to fund an expansion of social services during the era of high commodity prices. However, this process was limited by the Correa government’s collaboration with domestic capitalism and failed to fight the stronger forces of international capitalism when global oil and commodity prices collapsed.

As long as Ecuador is run by corporations and dependent on a global capitalist market, it will remain a commodity exporter fettered by debt and the shackles of market logic will continually force the country to consider loans, “free-market” reforms, and cuts. In order to end these attacks on living conditions, eliminate poverty, provide adequate housing and health care for all, and raise living standards, Ecuador needs genuine socialism where the economy is planned by ordinary people for use rather than profit. This must become the program of the class movement underway, to be implemented by a workers and indigenous people’s government. On a global scale, the uprisings in Chile, Haiti and Puerto Rico, the thousands protesting in Argentina, etc, all point to a possible future where a socialist Ecuador does not stand alone but as part of a voluntary socialist federation across Latin America, able to end the exploitative economic patterns of neocolonialism and fight for international socialism.