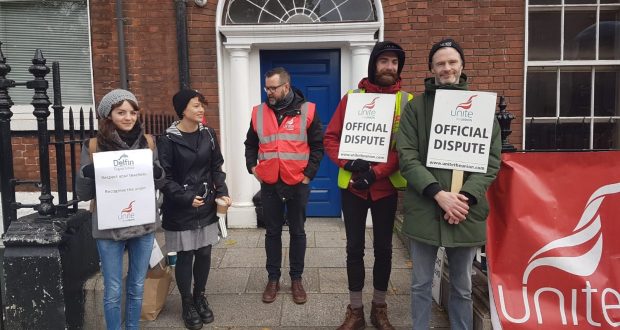 “Like most labor battles, these strikes were about winning respect as much as anything else. More often than not, fights around pay are simultaneously struggles for basic human dignity…”

In the second week in November and seven weeks into their dispute, English Language Teachers (ELT) at Delfin school stepped up their industrial action and stayed out on the picket line for the entire week. This escalation of action was much needed to make Delfin owner Gareth Butler feel the determination of the workers in his pocket. Butler’s schools are worth €4.2 million, yet he keeps his staff on poverty pay.

Butler is just one example of a problem endemic throughout the ELT sector – schools run as businesses with precarious working conditions for the over 1,000 staff working in it. With rents in Dublin soaring to over €2,000 per month, English Language teachers simply cannot make do. They got organised and they want the school owners to recognise their union of choice, Unite.

Delfin workers took the lead in taking industrial action but their example is now spreading to other schools, with IBAT starting stoppages on the 11 November. Trade union recognition throughout the sector would be a major step forward for all ELT workers to improve their pay and conditions. The way to strengthen the union in the sector is to ensure a win for Delfin workers – proving that getting organised pays off.

Delfin workers should be supported fully by all ELT workers and trade unionists. Spreading the action to other schools is one very efficient way of showing solidarity. Other ways of turning up the heat on Butler should be further considered. That includes turning the picket line into mass rallies of support from other trade unionists, supporters, students and the local community; exposing Butler’s role as a union-busting boss. The question should be posed: why are the Tourist Board recommending such an employer? Political pressure should be put on the government to regulate the sector and take it into public ownership.

Profit is the only concern of the owners of these schools, to win against them they need to be hit in their pockets. That means stepping up industrial action, strengthening public support and exposing the owners involved as union-busting profiteers – a strong message has to go out right across the sector that no boss will get away with treating his workers like this without being named and shamed and seeing their profits tank!

ELT workers are not the only ones currently struggling to gain trade union recognition. Ireland’s anti-worker laws allow bosses to ignore workers being represented by a trade union. Ryanair workers, hospitality workers, English Language Teachers and even workers in the public sector – ambulance workers organised in Nasra – all have had to take industrial action to fight for the basic democratic right to be represented by the union of their choice.

The trade union movement needs to build a broad-based, united campaign, bringing together workers from these different sectors to say “No More!” – workers need effective representation against the growing exploitation of low pay and precarious work!

Education should not be for profit!

In Ireland, ELT schools are run as private, for-profit businesses. The sector is worth over €800 million per annum and caters for 130,000 students. Unfortunately, the government treats it as an industry rather than an essential service, and it is pushed into the hands of private profiteers. Owners invest speculatively, use existing schools as collateral for further speculation, charge students the highest fees possible and pay staff as little as possible.

All of this has little to do with education, but instead places the pursuit of profit before everything else. As long as schools are run for profit, exploitation will be rife. All these schools should be seized from the hands from profiteers like Gareth Butler and brought into democratic public ownership. This can mean that the needs of students are put centre-stage and the teachers get standard teachers’ contracts and wages, are paid for all the hours they work (including prep) and are entitled to sick pay and maternity benefit. 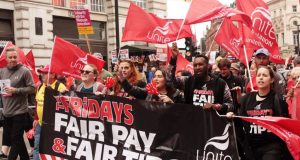